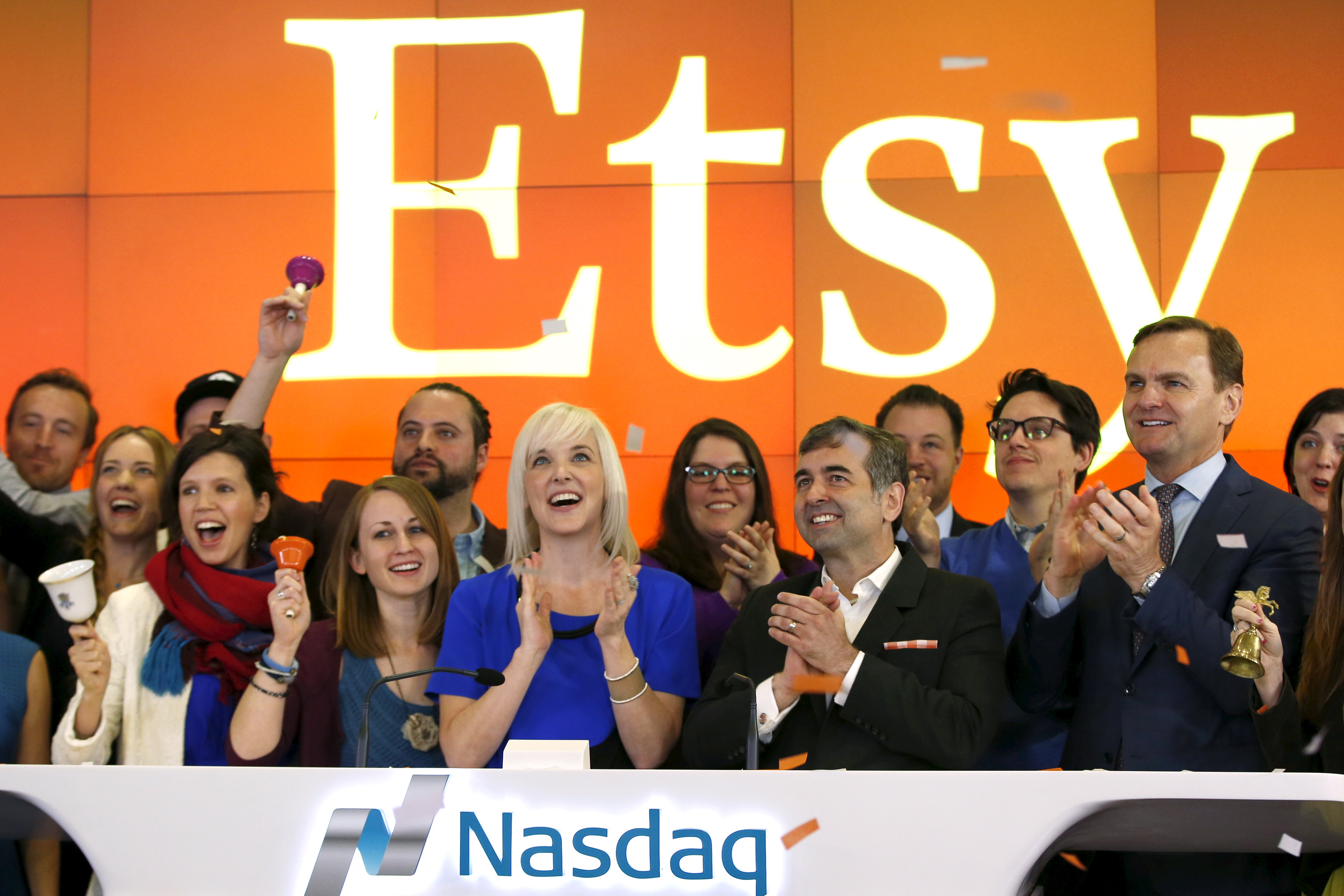 Etsy (ETSY), the online crafts marketplace, has become the latest company to reap the benefits of an initial public offering even though it hasn't earned a dime in profits.

Shares of Etsy, which has lost about $18.4 million over the past three years and has warned investors that it may never become profitable, debuted this morning at $33.52, more than double the $16 level where it was priced. The shares, though, gave back some its its gains and by the late afternoon were priced at $29.57.

At its current valuation of about $3.6 billion, Etsy is valued higher than many well-known and profitable companies such as Ruth's Hospitality Group (RUTH), the parent company of the Ruth's Chris steakhouse chain, ($561 million) and New York Times Co. (NYT) ($2.21 billion). Party City (PRTY), a profitable retailer, also debuted today. Its shares, which opened at $17, recently changed hands at $20.58, a gain of 21 percent. That places its market capitalization at about $2.3 billion.

Katherine Smith, a principal at Renaissance Capital, which follows the IPO market and sells an exchange-traded fund based on new stock, attributed Etsy's success to its "cult status" on Wall Street.

"This company has really loyal customers," she said in an interview.

Investors are finding reason to be optimistic about Etsy. The company generates free cash flow and is profitable when measured using EBITDA (earnings before interest, taxation, depreciation and amortization), a widely followed metric on Wall Street. The bottom line for the company, however, is in the red when measured by GAPP (generally accepted accounting principals).

"There is good reason to believe that the company will become profitable on the bottom line in the future," Rett Wallace, CEO of Triton Research, told CBS MoneyWatch, adding that might happen within five years.

Brooklyn, New York-based Etsy, which was started because founder Rob Kalin grew frustrated over the difficulties he faced in selling a wood-encased computer, allows only hand-crafted goods to be sold on its site. It's a strategy that has resonated with consumers. Sales rose 56 percent to $195.6 million, and it had 1.4 million active sellers and 19.8 million active buyers as of the end of last year.

Small investors were given the chance to buy as much as $2,500 in Etsy shares at its IPO level. Even so, the successful stock market debut of Etsy and other money-losing companies such GoDaddy (GDDY), a provider of Internet domain registration and business services, and online storage provider Box (BOX) has raised concerns among some investors that these stocks are enjoying valuations that their fundamentals don't justify.

"They do have a pathway to profit, but it certainly isn't immediate," said Timothy Ghriskey, who helps manage $1.5 billion for Solaris Asset Management. Ghriskey says he's a fan of Etsy but not its current valuation. He added that the IPO reminded him of the dot-com bubble of the 1990s. "It was fairly priced at the IPO, but now this is pure speculation. ... Traders are looking to make a quick buck."

Updates at 3:10 p.m. to add analysis, details on Etsy's finances.