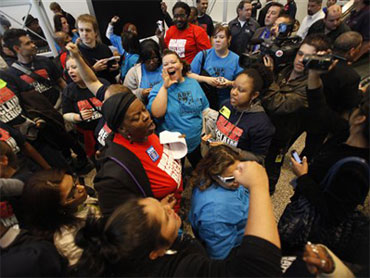 Thousands of workers and union members angry over lost jobs and the taxpayer-funded bailout of banks are marching on Wall Street.

Thursday's rally was organized by the AFL-CIO and an association of community groups. The protesters included people hurt by the mortgage crisis and held up signs saying "Wall Street Overdrafted Our Economy" and "Reclaim America."

Noisy protesters with signs took over two bank building lobbies on Thursday in a prelude to a Wall Street rally by workers and union leaders angry over lost jobs, the taxpayer-funded bailout of financial institutions and questionable lending practices by big banks.

Hours before the scheduled rally, more than 100 people entered a midtown Manhattan building housing JPMorgan Chase offices. They handed a bank executive a letter requesting a meeting with the CEO, and chanted "Bust up! Big banks!" and "People power!"

A half-hour later, they were calmly escorted outside by officers, who remained expressionless as the protesters chanted, "The police need a raise."

They then walked a few blocks up Park Avenue and crowded into the lobby of the Seagram Building, where Wells Fargo and the bank it merged with in 2008, Wachovia, have offices.

The protesters held up signs reading, "Save Our Jobs" and "Save Our Homes." One included a Great Depression-era photograph. Police arrived on horseback as curious office workers watched the scene unfold from their windows.

"We're here today to stop the corporate greed that is ruining our neighborhoods," said Andrea Goldman, 59, of Springfield, Mass., who's part of a group called Alliance to Develop Power.

The banks did not immediately respond to requests for comment.

Thousands of workers and union members were expected at the rally, organized by the AFL-CIO and an association of community groups.