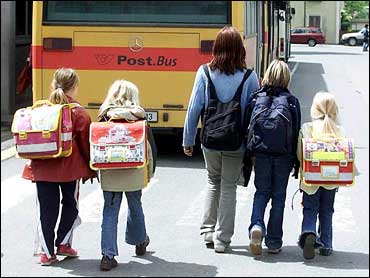 Every weekday, 10-year-old Madeleine Greenfield sidesteps puddles where the sidewalks aren't and braves a dangerous intersection under her mother's supervision.

She's just trying to get to school, all of three blocks away.

"I can't cross at the crosswalk without a light, so it's sort of a pain," the fifth-grader said last week, grabbing her lunch and backpack as her mother picked up her baby sister and herded her out the front door.

Madeleine is in the minority: Fewer than one in 10 children walk or bike to school now, according to the Centers for Disease Control and Prevention. Thirty years ago, more than two-thirds did.

That's changing in Arlington and in more than 50 cities and towns trying to get their children out of cars and van pools and onto the sidewalks.

Three years ago, parents pressured Arlington County to come up with money and a plan for walkable routes to its 26 schools. Soon, Madeleine will have a sidewalk outside her house and a safer intersection to cross by herself.

Each year, about 175 children are killed by motor vehicles while walking or riding bicycles between home and school, according to a Transportation Research Board report. Per mile, bicyclists have the highest rate of injury or death. Kids on foot are the next highest.

Marin County, Calif., started a "Safe Routes to School" project in 2000 because of massive traffic jams near schools.

"One of the biggest obstacles we have to overcome is the fear factor," said Kallins. "Parents think if they keep their child attached at the hip nothing will happen to them."

So Marin County parents started "walking school buses," where they convoy groups of kids to school. It's a concept used in Chicago city schools where gang crime is the biggest threat to children.

After two years, the number of children walking or biking to school in Marin County rose to 38 percent from 21 percent. No one was injured or killed.

Elizabeth Stevens, an environmentalist, organized a successful Safe Routes to School program at her daughter's elementary school in Arlington, Mass.

When snow discouraged pupils from walking in February, Stevens formed a polar bear club. Despite 40 inches of snow and subfreezing temperatures, she shepherded about 45 kids walking and talking about polar bears to school every day.

Ingenuity can help get children walking safely, but in the end tax dollars are needed to build speed bumps, extend curbs or install walk signs that indicate how many seconds people have left to cross the street.

When the state of Texas set aside $3 million for Safe Routes to School last year, 277 communities came up with $45 million for projects.

Rep. James Oberstar, D-Minn., recently filed a bill that would spend $1.5 billion over the next six years for Safe Routes to School. Oberstar argues the money will end up widening highways if it isn't set aside for specific safety programs.

The Bush administration rejects that approach, preferring to let states decide how to spend $15 billion for traffic safety over the next six years. That's double the $7.6 billion spent in the past six.

Advocates say walk-to-school programs are gaining new momentum from parents and teachers concerned about a childhood obesity epidemic. With fewer children than ever getting enough exercise, 13 percent of kids between 6 and 11 are overweight.

"Our society is waking up and smelling the lard," said Peggy DaSilva, executive director of Walk San Francisco, an advocacy group.

Teachers say the program has unintended consequences: Children who walk to school are more alert and better behaved than those who ride the bus.

Nancy Burns said she noticed a significant difference in her students who participated in the Safe Routes to School program at the Northstar Elementary School in Minneapolis. "Healthy, alert children would be my No. 1 thing," she said.

Madeleine Greenfield's mother, Star Lanman, said walking makes her feel more connected to her community. "When you're able to walk to school, you feel like it's part of the family," she said.