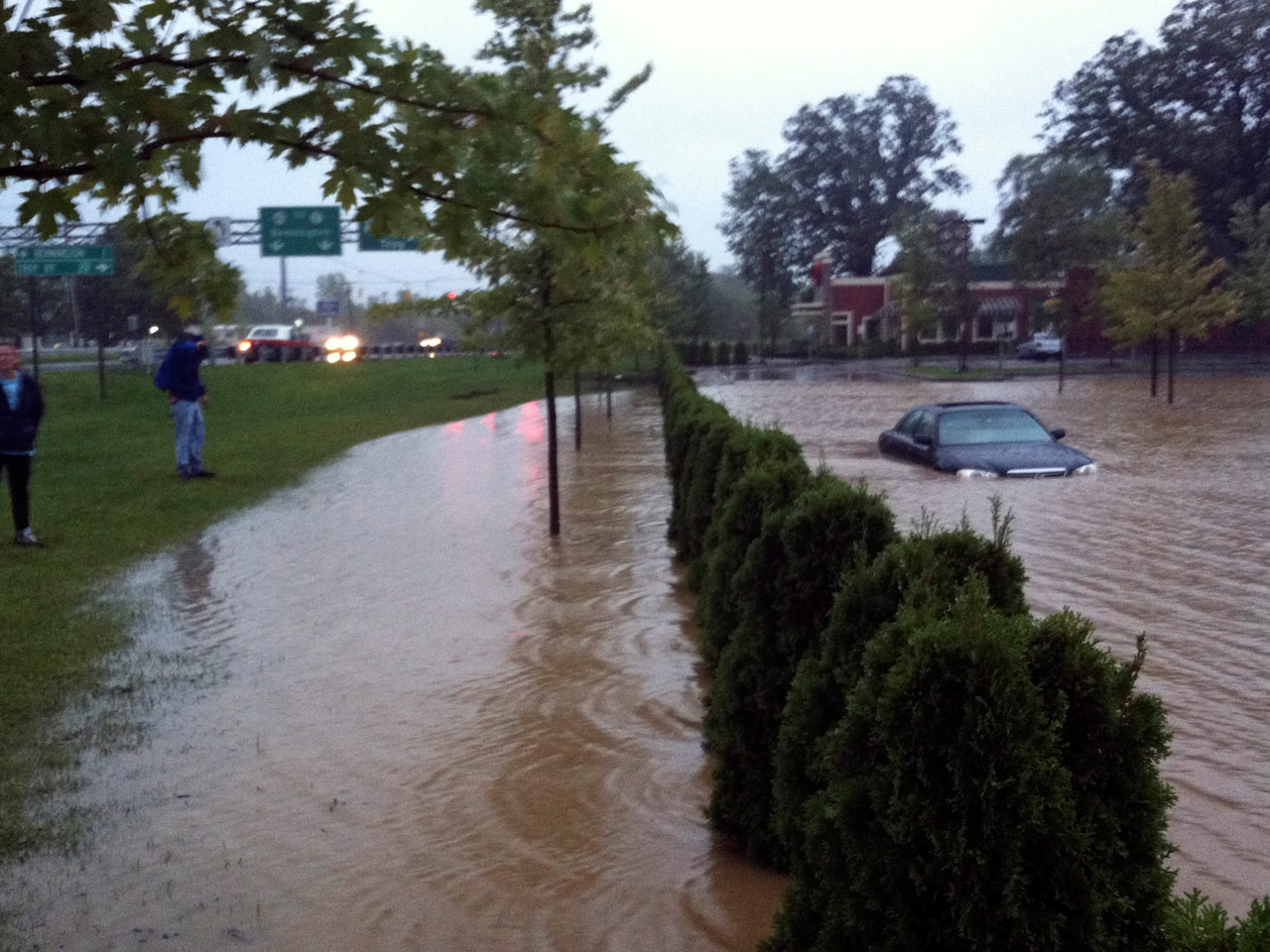 CHESTER, Vt. - In the wake of Irene, Vermont is experiencing flooding across the state not seen since the early 1900s.

Hundreds of Vermonters were told to leave their homes after Irene dumped several inches of rain on the landlocked state, turning normally placid streams into raging torrents tumbling with tree limbs, cars and parts of bridges.

Communities were cut off, roads washed out, and at least a dozen bridges lost, including at least three historic covered bridges. Two people were killed.

One of those who died in Vermont was Rutland Water Treatment Plant Supervisor Michael Garofano Sr., whose body was recovered Monday, said a family spokesperson. Garofano was checking the inlet of the Rutland water system when he disappeared. His son, 25-year-old Michael Garofano Jr., is still missing, according to the Rutland Herald.

Click on the player below for video provided by Susan Hammond showing floodwaters taking out a covered bridge in lower Bartonsville, Vermont.

The AP reported that Vermont's state hospital is being evacuated after flood waters threatened the Waterbury facility.

Vermont Department of Human Services Secretary Doug Racine said Monday that all 51 patients and staff who are travelling with them are being placed in other facilities like Fletcher Allen Health Care in Burlington, The Brattleboro Retreat and the Southern Vermont Correctional Facility.

The psychiatric hospital lost power Sunday night and some of the patients had to be evacuated from the first level of the hospital when rising water from the remnants of Hurricane Irene inundated the town.

Parts of downtown Brattleboro and Bennington were under water, as were several smaller communities.

Gov. Peter Shumlin called it the worst flooding in a century, and the state was declared a federal disaster area.

"We prepared for the worst and we got the worst in central and southern Vermont," Shumlin said Monday. "We have extraordinary infrastructure damage."

Flooding on the Winooski River inundated the village of Waterbury, forcing Vermont Emergency Management to move its emergency operations center to Burlington, and briefly consider releasing water from a dam to prevent it from failing.

Flood damage was reported from one end of the state to the other.

The good news is flood waters have begun to recede.

Vermont transportation officials say a dozen towns around central and southern Vermont are still cut off, with washed out roads and bridges blocking access.

Gov. Peter Shumlin, Sen. Patrick Leahy and other officials are touring some of them by helicopter.

Chris Cole of the Agency of Transportation says towns in which all or part remain unreachable include Bennington, Cavendish, Chester, Granville, Killington, Ludlow, Mendon, Middletown Springs, Rochester, Stockbridge and Wilmington.

Video posted on Facebook showed a 141-year-old covered bridge in Rockingham, Vt., swept away by the roiling, muddy Williams River.

Emergency Management Spokesman Robert Stirewalt said an estimated 263 roads were closed across the state and at least nine shelters were set up.

"It's pretty fierce. I've never seen anything like it," said Michelle Guevin, who spoke from a Brattleboro restaurant after being evacuated from her home in the Williamsville section of Newfane. She said her house was high enough to be OK, but the fast-moving Rock River was washing out the road that runs by it.