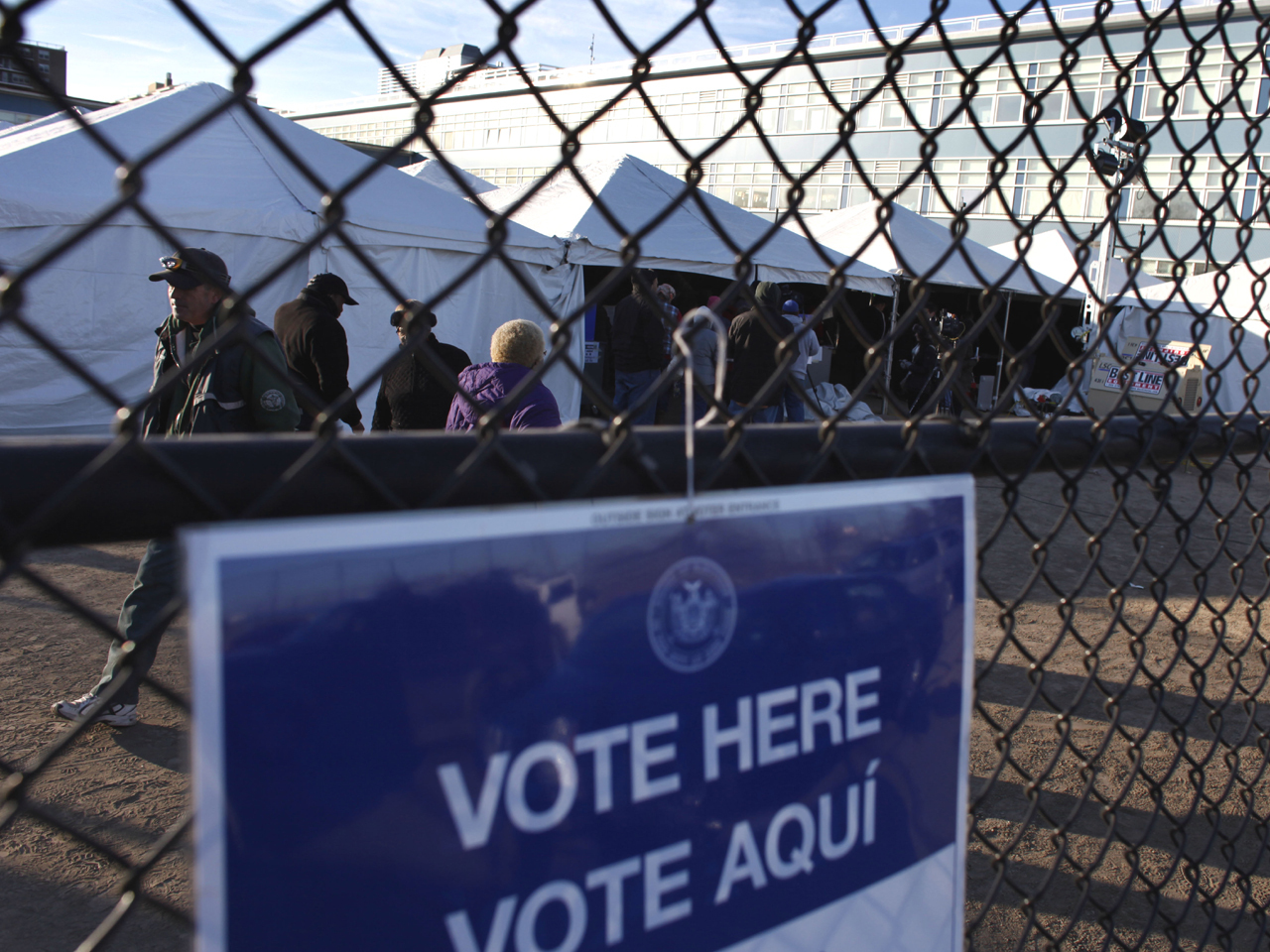 NEW YORK Election officials in parts of the New York metropolitan area still reeling from the effects of superstorm Sandy are working at getting displaced residents to polling places - or simply getting polling places up and running in the face of continuing power outages and flood-damaged poll sites.

In New York and New Jersey, Election Day turnout has been heavy, with many voters in areas damaged by Sandy expressing relief and even elation at being able to vote at all.

But not everyone was in a voting mindset.

In Hoboken, N.J., which suffered severe flooding from Sandy, 76-year-old retired mechanic Anthony Morrone said he hasn't missed a vote since coming to the U.S. in the late 1960s. But today, he says, there's too much cleanup work to do.

Turnout has been heavy so far in several storm-ravaged areas of New York with many seeing Election Day as a cathartic sign of normalcy amid the devastation of last week's storm.

Sarah Brewster of Long Beach, N.Y., sobbed as she emerged from her polling place in a school cafeteria. She said she had been overcome when she went inside to vote and saw the clocks all stopped at 7:27 — the time her community lost power on the evening of Oct. 29.

Voting is "part of our civic responsibility in the midst of all this crisis," said Brewster, a nonprofit worker.

New York City Elections Commissioner J.C. Polanco is asking voters to be patient, saying lines at polling places have been long even in parts of the city most devastated by Sandy's winds and water. In the Rockaways section of Queens, Polanco said voters are casting ballots at a school where nine polling locations were merged into one. In a Bronx precinct, voting is being done in tents powered by emergency generators.

Gov. Andrew Cuomo urged people to vote today in spite of the difficulties, saying it's important that the system works.

In New York City, where there are more than 140,000 displaced residents, more than 60 polling places were relocated or combined, reports CBS Station WCBS. Bus service is being provided in the hardest-hit areas to take voters to their new polling places.

"It's important for people to come out and vote even if it's a little more difficult for them," said New York City Board of Elections Commissioner Frederic Umane. "If it takes a little bit longer, if you have to go through a couple more hoops, we're doing the best we can under some difficult circumstances."

On storm-ravaged Staten Island, workers scrambled to set up a polling site Tuesday morning. An hour before the 6 a.m. opening, flares were set up at the entrance to Public School 52 in the Midland Beach neighborhood. There was no light at all as police helped poll workers get gas for their generator.

The voting machines had to be retrieved from inside the school and moved into tents, and heaters were stacked on tables inside. The temperature was around 29 degrees as bundled-up voters began to line up in the dark.

"They don't even have signs at the school. Everyone parks their car, gets out and walks around," said voter Nancy Benedetto. "This is absurd, totally absurd. I'm going to be late for work."

There was no official signage at the academy Tuesday saying the polling place had been moved. The private school made a hand-written sign and placed it outside the driveway.

On Long Island, some polling places have been closed and other consolidated in Oceanside. Early Tuesday morning some voters were confused by the changes, and others left without ever casting a ballot.

"I don't even know where to vote yet," one woman said.

Nassau County Elections Commissioner William Biamonte said officials are trying to get information about polling places out to voters.

"If they go to their regular polling place, if they're not sure, there will be signage at their old polling place if it's been moved," he said. "Ninety-plus percent of the polling places have not been moved."

Still, Biamonte said this year's Election Day is like nothing he's ever seen. Some polling places hadn't had machines delivered. In one case, poll workers' bus came at 7 a.m. instead of 5 a.m.

"This is Murphy's Law on steroids," he said. "Whatever's gone wrong, could have gone wrong. Let's get through the day and hope for the best."

But by about 8 a.m., most of the problems had been resolved, he said.

On Monday Gov. Cuomo signed an executive order allowing residents to cast a provisional ballot at any polling place in the state for president and statewide office holders. (Those who don't vote in their regular polling place won't be able to vote in local races.)

For information on your polling site, visit www.elections.ny.gov. You can also click here for a pdf list of polling site changes.

"Vote. It is our most precious right," Bloomberg said Monday.

New Jersey also offered displaced residents the option of requesting a ballot via email and fax — the same procedure followed by the state's overseas residents and military personnel. County election offices were quickly swamped with requests for email ballots, prompting officials to announce they would give voters until Friday to cast ballots.

"It has become apparent that the county clerks are receiving applications at a rate that outpaces their capacity to process them without an extension of the current schedule," Lt. Gov. Kim Guadagno, who is also New Jersey's secretary of state, said in a directive issued Tuesday.

Voters had to request ballots by 5 p.m. Tuesday to take advantage of the option.

Some in New Jersey said they weren't comfortable with the email option.

Pinky Milsen, a 62-year-old retired retail worker forced from her home on Long Beach Island, drove to a polling place on the mainland to cast a ballot for President Barack Obama.

New Jersey Division of Elections spokesman Ernie Landante said the state had taken extra steps to make sure people displaced by Sandy's destruction would be able to vote, like allowing "authorized messengers" to pick up as many mail-in ballots as they request for people in shelters or away from their homes.

"We are doing everything we can in this extraordinary situation not to disenfranchise voters displaced by Sandy. Their voices and their votes will be heard no differently than anyone else's," Landante said.

Officials said fewer than 100 polling places around the state were without power compared with 800 just days ago. Most voters will be able to cast ballots at their regular polling sites, they said.

"Go vote," New Jersey Gov. Chris Christie said Monday. "For most people in New Jersey who are watching or listening, you go to your normal polling place."

Lines were long in Point Pleasant, N.J., where residents from the Jersey Shore communities of Point Pleasant Beach and Mantoloking had to cast their ballots because of damage in their hometowns.

Many there still have no power eight days after Superstorm Sandy.

Annette DeBona of Point Pleasant Beach says it was the happiest vote she ever cast in her life. She chose Mitt Romney, saying he can lift America out of a spiritual and mental depression.

Michael Sirchio, an insurance adjuster from Point Pleasant Beach whose own home was damaged, voted for Obama, saying he inherited a financial crisis and two wars, and did a good job ending both.

In Bergen County, residents of Moonachie showed up to a vocational-technical school to vote, in the same gym where many were evacuated a week earlier after rising floodwaters swept through their town.

The Star Ledger reports that in North Plainfield, N.J., one of four poll machines was not working, and some residents had not gotten sample ballots in the mail. "It's been hectic," said 10-year poll volunteer Peter Romeri. Drivers also ignored roadblocks - set up because of debris in the streets - in order to get to the polling place.

In Little Ferry, N.J., Agim Coma, a 25-year-old construction worker, was the first voter to arrive, 13 minutes before polls opened. The storm claimed his apartment and car.

"It's important because it's our day," he said. "No matter what happens - hurricanes, tornados - it's our day to vote."

Gov. Christie's directive that displaced New Jersey residents would be allowed to vote through email and fax has caused some concern among privacy experts. However, the website Buzzfeed reports today that some email addresses at election offices in Essex and Morris Counties were not working or were bouncing back requests for ballots. The Essex County Clerk posted a message on Facebook directing voters who could not get through to apply for an absentee ballot directly to his personal Hotmail address.

In Hoboken, voters lined up to vote, despite being impacted by Sandy, WCBS reported. "We went through hell but we survived," a Hoboken resident said. "It was a long line, which is a good thing. People are going out and voting, which is what you should be doing."

Meanwhile, election officials in Hudson County said voters who are not eligible for special email ballots are requesting them anyway.

Larwa said she's getting requests from many people who were not displaced. She says she had 2,000 requests for email ballots by noon Tuesday.

Rutgers University law professor Penny Venetis said the problems were easy to anticipate when the state added this voting option but was not clear on the details.

A list of county clerk websites, phone numbers and fax numbers is available here. Ballot applications can be downloaded from the state's website.

New Jersey residents who need information on their polling stations can text 877877 with their home address.

Polls in New York are open until 9 p.m. and in New Jersey and Connecticut until 8 p.m.