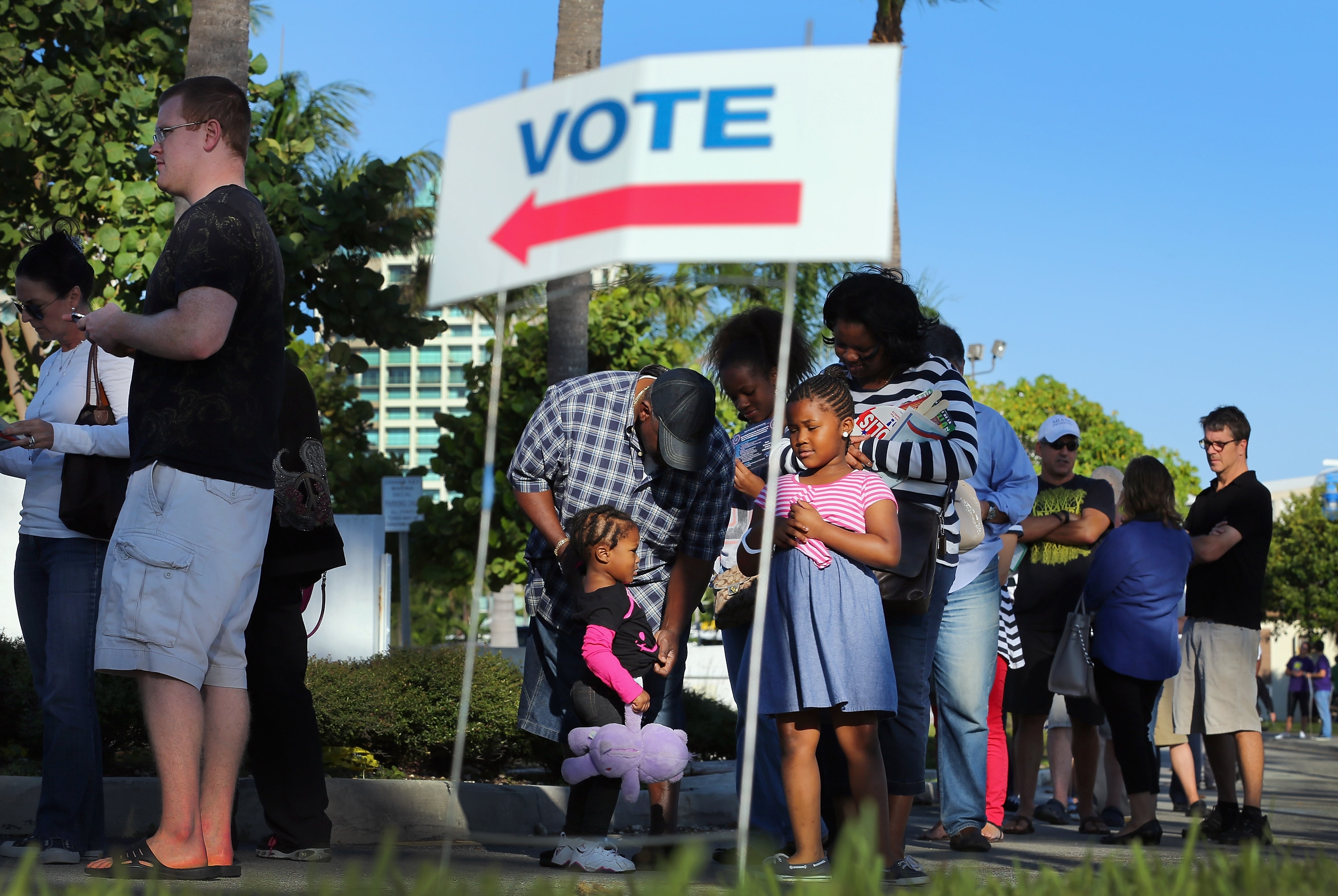 It's Election Day in America, and somewhere, something will go wrong.

As tens of millions of Americans descend upon polling stations, there will invariably be hiccups - power outages, exceptionally long lines, malfunctioning voting machines, and ill-functioning poll workers. Lingering complications from superstorm Sandy add yet another layer of difficulty for some parts of the country.

With that in mind, what follows is a running tally of reported polling problems - errors man-made, machine-made, providential, and everything in between.

Given the overwhelming demand in New Jersey to submit ballots via email or fax, New Jersey's top elections official today extended the deadline for submitting those ballots until Friday. New Jersey voters must still apply for an email or fax ballot by the end of today, Election Day.

Numerous reports detail examples of voters in parts of Philadelphia and Pittsburgh receiving provisional ballots because their names are not on the voter rolls despite insisting they are registered. Barbara Arnwine with the Lawyers Committee for Civil Rights Under Law said this afternoon that "too many voters" have been affected, leading her to "suspect" improper voting purges have been conducted. She pointed to several separate reports indicating "huge numbers," "several" and "20 to 50" voters have been given provisional ballots for not being on the rolls.

The voting watchdog coalition Election Protection said they have received more than 69,000 calls with voting problems as of 4:30 p.m. ET.

In some areas of Virginia, elections officials reported long lines due to "very heavy, robust turnout" that will likely exceed 2008 turnout levels, reports CBS News correspondent Wyatt Andrews. According to Donald Palmer, Secretary of the State Board of Elections, voters throughout Northern Virginia and the Virginia beach areas have spent between one and three hours in voting lines. In some precincts in Prince William County, a swing county recognized as a bellwether, voters have waited over four hours to cast a ballot.

The state says it is working with local officials to move election machines to the impacted areas. Palmer is asking voters to help reduce the long wait by being "election ready" - having their IDs ready and reading in advance the three constitutional amendments on the ballot.

Under state rules, voters in line at 7 p.m. will be allowed to vote "for as long as it takes."

The calls were accidentally made by the Pinellas County elections division, spokesperson Nancy Whitlock said. She said the robocalls had been dialed since last week to remind voters to turn in their mail ballots and had not been discontinued. Whitlock said all but 215 of the robocall recipients had been notified about the mistake and provided correct information. She said they are working to reach the remaining voters.

In Allegheny County, which includes Pittsburgh, a judge ordered electioneering outside a polling location to cease. Republicans were standing outside the doors and asking people walking into the polling station for ID. One of the judges said the electioneering "could have a chilling effect on voting."

Also in Pennsylvania, a judge quickly responded to a complaint filed by the Pennsylvania Republican Party about a larger-than-life sized mural of President Obama inside a polling location. Judge John Milton Younge ordered the mural to be covered up for the remainder of the day.

Barbara Arnwine, Executive Director of the Lawyers Committee for Civil Rights Under Law, which is part of a coalition of groups providing election monitoring across the country, said the organization's "election protection" hotline has received 26,000 calls from voters around the country about problems voting.

In New Jersey, the state hardest hit by superstorm Sandy, a system designed to allow displaced New Jersey voters to fax or email their voting application and ballot has caused problems with some voters who say they submitted their application but never received a ballot in return or could not contact the clerks' offices.

In addition, many voters had their voting locations changed due to the storm, and a text message system designed to tell people where to vote has returned incorrect information to some voters, according to NJ.com. Voters in Moonachie were told to go to a local civic center that was heavily damaged by Sandy. Newark Mayor Cory Booker told his followers on Twitter, "I don't have complete confidence in the text # due to feedback" and counseled his residents to check the city's website.

NJ.com also reports that recent redistricting has sown some confusion, causing some residents to show up at the wrong polling location. A school in Hoboken had two lines - one for District 5 voters and the other for District 7 voters. A man who was standing in the wrong line and was eventually corrected by a poll worker did not appreciate the confusion: "This isn't hurricane related at all. The leadership or management of this voting ward are at fault," he said.

Another Hoboken voter, surveying the long lines and only two voting machines at his location added, "Two machines here for all these people? It's not right. Someone should have prepared better."

In Pennsylvania, amid heavy turnout in the Phildadelphia region, Philly.com reports that officials at several locations have been instructing voters that they need a state-issued photo ID to vote, in accordance with Pennsylvania's recent voter-identification law - despite the fact that courts have suspended the law for this election. Arnwine with the Lawyers Committee for Civil Rights Under Law said poll workers have been "poorly and wrongfully trained" by sending people home for not showing photo ID. She added that there are reports of signs posted outside polling places incorrectly stating that photo ID is required.

In Virginia, the Richmond Times-Dispatch has reported several problems. Power outages in Eastern Henrico briefly disrupted voting at three polling stations. Local utility provider Dominion Power says it restored electricity by 7:41 A.M. In nearby Richmond, long lines have been reported at a variety of polling locations, with some voters waiting over an hour to vote - or leaving before they cast a ballot: "Long, unmoving lines to vote at Maymont Elementary are causing many to have to leave after waiting in line for over an hour, without voting," area resident Kimberly Lammi said in an email to the Richmond Times-Dispatch. "Very troubling."

And in several locations throughout the Old Dominion, voting machines have already caused headaches. A malfunctioning ballot counting machine was reported at a polling place in Newport News. A poll worker at one precinct in Grayson County erred in setting up voting machines there. And in Spotsylvania, a local election official said they only had voting machines for one of two Congressional districts. More machines were eventually brought in.

Finally, at a middle school in Chesterfield County, a poll worker erroneously told those in line that they needed their registration card and a picture ID, despite the fact that Virginia law only requires one or the other. A distressed voter was assured by a polling official that the announcement was a mistake.

In Anderson, Indiana, the Herald Bulletin reports that a "printing glitch" caused voters to be turned away from the polls after mistakenly being told they'd already voted via absentee ballot. Barbara Hutton, Republican chair of the Madison County Election Board, said the snafu had been "ironed out," explaining, "What (election officials at the precinct) need to do is compare the voting list to the absentee list to see who has and hasn't voted absentee. If you know you have not voted absentee then you should be able to vote."

In Florida's populous Miami-Dade county, the site of a chaotic spectacle last weekend after a crush of early voters overwhelmed a series of polling stations that had to briefly shut down as a result, long lines have been reported but no pressing problems have surfaced yet, according to the Miami New Times.

But just a few dozen miles up I-95, some Palm Beach County voters have not been so lucky, according to the Palm Beach Post - a ballot counting machine in West Palm Beach was malfunctioning, and some voters reported waiting for more than an hour to ensure their vote's receipt. And in Westgate, at least five voters were turned away from precinct 2053 because the precinct apparently no longer exists, despite the fact that these voters' updated registration cards specified the now-defunct precinct.

And in Rhode Island, the Providence Journal reports that voting at a school in West Kingston was temporarily halted after officials realized the ballots they'd received were meant for a different location in North Kingstown, according to Town Clerk Dale S. Holberton. Voters were told to vote later or submit a provisional ballot at an alternative location. A location in North Kingstown was also affected, but the correct ballots eventually reached the correct locations.