This story was filed by CBS News correspondent Mark Phillips. 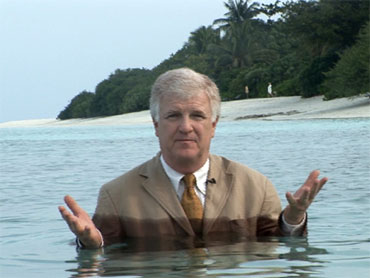 (CBS)
To get anywhere in the Maldives — the low-lying Indian Ocean archipelago now at the center of the global warming argument — you either have to get on a traditional slow boat, a Dhoni — long since converted from sail to diesel, or climb into a seaplane originally designed to access the northern Canadian bush. We took the plane.

It came with a Canadian pilot who took a dim view of the global warming hype.

"They say the planet is heating up," he said. "Duh, it's been warming up since the last ice age. They say the sea level is rising. But, the coral around here grows. If the sea rises, the islands will rise too."

The Maldives is a dynamic place, a world of fast flowing currents and shifting sands. And the pilot — let's call him Captain Canada — like everybody in the tourist business here, has a vested interest in downplaying the consequences of climate change. Anything that detracts from the idyllic nature of the Maldives islands (and idyllic they surely are) puts a crimp in his future as a transporter of well-heeled tourists to posh beach resorts.

"Are you kidding me?" he says when I ask how he likes it here. "It's like being on a permanent vacation."

Captain Canada can put a Twin Otter float-plane down on a Maldives lagoon like a sleepy head nestling into a down pillow. He barely makes a splash. But he's wrong about global warming.

Watch CBS News Videos Online
The waters around the Maldives have been telegraphing their intent. They're getting warmer and they've been rising. The islands — roughly two thousand of them strung like pearl necklaces around the rims of coral outcrops in the middle of the Indian Ocean — are already under threat. The highest point on any of them is less than eight feet above sea level.

Of the total land area (roughly twice the size of Washington D.C.), about 80 percent of the Maldives lies less than three feet above the encroaching waves. And the warming waters are already threatening the reefs that protect them.

An El Nino type warming event in 1998 killed off much of the reef. The water temperature rose by a mere two or three degrees and stayed there for a while. As the coral bleached and died back, the islands they protect were exposed to the eroding currents. Beaches vanished. Islands got smaller. The seas don't have to rise to threaten this place, all they have to do is continue to get warmer.

(CBS)
But rise the waters will. Far away from this equatorial paradise, glaciers in the polar regions are melting away at an increasing rate and that water has to go somewhere. Captain Canada may not realize it, but the Maldives new President does, and he has a knack for public relations.

Mohamed Nasheed is a 42-year-old former journalist who has already fought enough battles to last a lifetime. His biggest battle is ahead of him.

Imprisoned, placed in solitary confinement, tortured — he endured, and a year ago he deposed the Maldives dictator of three decades, Maumoon Gayoom, in the country's first ever democratic, multi-party election. Now, having saved 400,000 Maldivians from tyranny, he says he's trying to save them from ignorance.

Nasheed has been among the loudest voices calling for a pact to reduce the greenhouse gasses that are warming the planet. Yet it's hard to be heard from a place so small and so far away. He's used words — saying a failure to reach an agreement on carbon reduction would be a "suicide pact." And he's used gesture, organizing an underwater cabinet meeting that ran and ran on the world's TV channels.

According to even the most conservative current scientific consensus, he's not being dramatic. The last UN climate change panel report two years ago predicted a sea level rise this century of as much as 23 inches. Subsequent reports using new data on icecap melting predict a rise much higher than that. "If we're at the top of the range," he says, "We've had it."

The Maldives, which sit in the middle of the ocean, are all about water. The yellow fin tuna run through the waters like marauding armies and, for the last 40 years, the tourists have come to join the fish. But there are limits, even to the influence of sushi and sand. Fish prices and tourism are down thanks to the recession. And now the sea threatens to rise up and take away what it has given.

A marine biologist who works for one of the top-end resorts says there's an unspoken slogan circulating in the industry: "Come to the Maldives while they're still there."

Having loaded a party of Japanese tourists into his plane at the end of their holiday, Captain Canada climbs into the cockpit and fires up his engines. He's got a couple of days off ahead of him and soon he'll fly home for the holidays. A soft tropical evening is settling in as he gently lifts off the lagoon and turns into the warm, setting sun. It's hard to imagine how this glorious scene could be changing. But it is.

See the story tonight on the