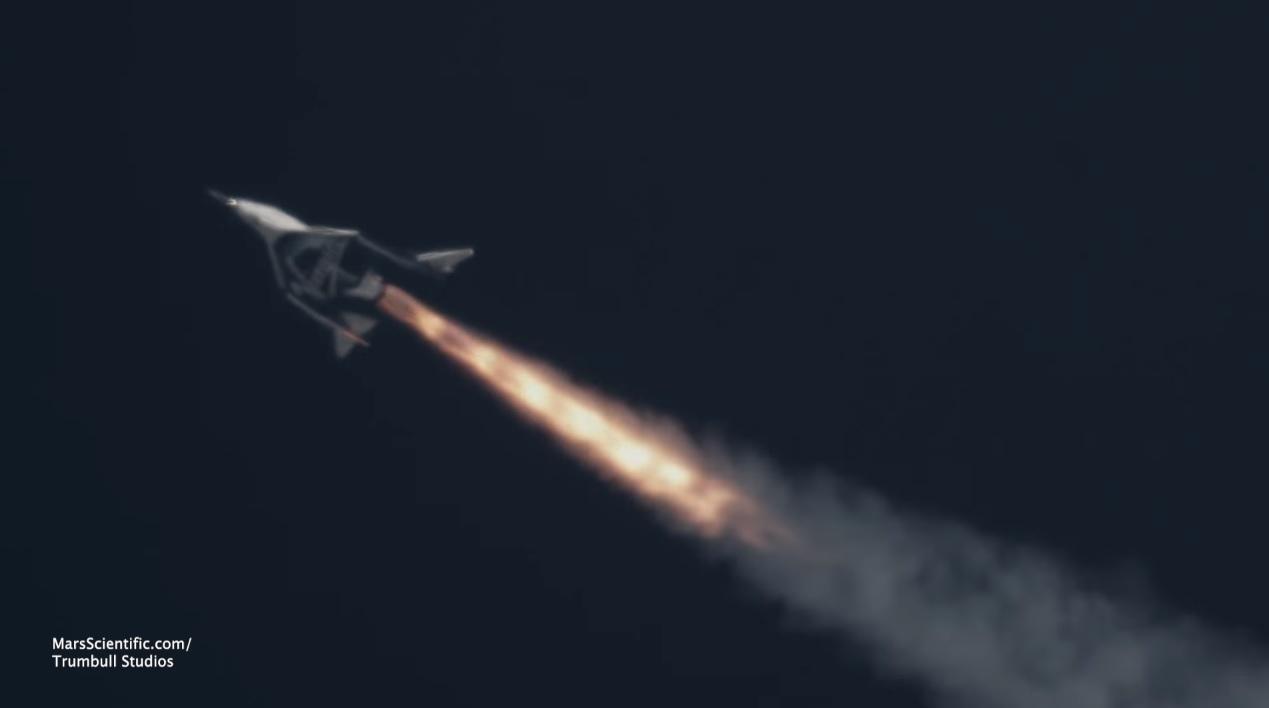 Virgin Galactic successfully launched its rocket-powered SpaceShipTwo on a supersonic test flight high above the Mojave Desert Thursday. It's the company's first powered flight since a crash in 2014 that destroyed an earlier model and killed one of its pilots.

After takeoff from the Mojave Air and Space Port, the new rocketplane, known as VSS Unity and built by The Spaceship Co., was dropped from its mothership, the White Knight 2 carrier aircraft, at an altitude of 46,500 feet. A few seconds later, pilots Mark Stucky and Dave Mackay ignited Unity's hybrid rocket motor.

As the spacecraft quickly accelerated, the pilots put the craft into an 80-degree climb and reached 1.87 times the speed of sound during the 30-second burn. It was Unity's first attempt at transonic flight.

The spaceplane coasted up to an altitude of 84,271 feet before arcing over and beginning the long glide back to Earth. The pilots raised the vehicle's twin tail booms to an angle of 60 degrees in a maneuver known as "feathering," which helped ease the stresses experienced while plunging back into the thick lower atmosphere.

The tail booms were rotated back in line with Unity's fuselage at an altitude of about 50,000 feet and from there, Stucky and Mackay flew a normal gliding approach to a runway landing.

"The flight has generated valuable data on flight, motor and vehicle performance which our engineers will be reviewing," Virgin said in a statement on the company's web page.

"It also marks a key moment for the test flight program, entering now the exciting phase of powered flight and the expansion to full duration rocket burns. While we celebrate that achievement, the team remains focused on the challenging tasks which still lie ahead."

It was the first powered flight for the futuristic spaceplane since an earlier model was destroyed in 2014 when pilot error resulted in the release of the tail booms from their normally locked position during the initial moments of a rocket-powered test flight.

The vehicle disintegrated, killing one pilot and injuring another. The spacecraft design has been modified to prevent any possibility of a similar mishap in the future.

SpaceShipTwo is based on famed aerospace designer Burt Rutan's smaller single-seat SpaceShipOne, which became the first privately funded spacecraft to fly above 100 kilometers -- the accepted definition of where "space" begins -- in 2004.

SpaceShipTwo is a scaled-up version of the rocketplane that can carry a crew of two and four to six space tourists. While it is not capable of reaching orbit, the spacecraft will allow passengers and crew to experience several minutes of weightlessness during the fall back into the discernible atmosphere.

Virgin Galactic is the first private company to offer trips out of the atmosphere that are open to private citizens. Blue Origin, owned by Amazon-founder Jeff Bezos, has also entered the commercial space arena, building a roomy capsule that will be boosted out of the atmosphere by a more traditional hydrogen-powered rocket.

Virgin founder Richard Branson said last year he hoped to begin commercial launches this year, but the company has not revealed any schedule details and it's not yet clear when paying customers might get off the ground.