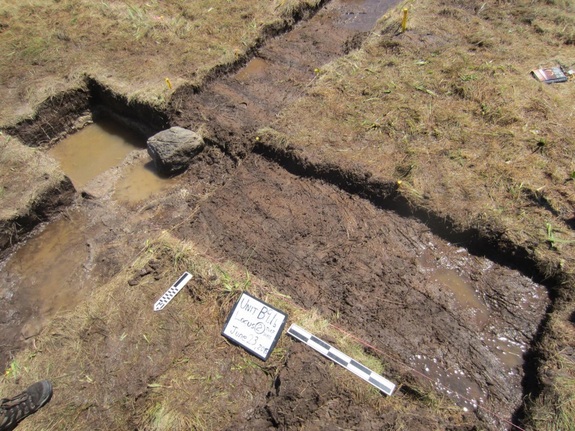 Three archaeological sites that may have been used by Vikings around 1,000 years ago were excavated recently in Canada.

If confirmed, the discoveries would add to the single known Viking settlement in the New World, located at L'Anse aux Meadows on the northern tip of Newfoundland. Excavated in the 1960s, that Viking outpost was used for a short period of time around 1,000 years ago as well.

Even so, pinpointing actual Viking remains or other clues of Viking settlements has been difficult, making the three sites -- two in Newfoundland and the other in the Arctic -- intriguing to archaeologists.

Sarah Parcak, a professor at the University of Alabama at Birmingham, and her colleagues spotted the so-called Point Rosee site in southern Newfoundland while scanning satellite imagery, and announced their discovery a few weeks ago.

The team found what may be a hearth used to roast bog iron, as well as a structure, of some type, made with turf. Radiocarbon dating suggests that the site was used sometime between the ninth and 13th centuries.

These finds, the researchers say, suggest that Vikings may have used the site, though more dating information and excavation are needed to confirm that idea, they said. Additionally, even if it is a Viking site, it's uncertain how long the Vikings lived there.

"I think that all of us would be in agreement in urging you to relay the preliminary nature of the findings -- the unconfirmed cultural and period affiliations," said team co-director Gregory Mumford, who is also a professor at the University of Alabama at Birmingham.

Another possible Viking site turned up after archaeologists investigated a series of peculiar holes in a small town called Sop's Arm near White Bay, about 120 miles (200 kilometers) south of L'Anse aux Meadows. Archaeologists say that these "pitfalls," which have been known to exist near the town, would have been used to trap large animals, such as caribou. [Fierce Fighters: 7 Secrets of Viking Seamen]

In 1961, Helge Ingstad, the archaeologist who would excavate L'Anse aux Meadows, was guided to the pitfalls by a local man named Watson Budden. Ingstad thought it was likely that the Vikings had constructed the holes, but he didn't excavate them.

Perhaps the Vikings drove animals toward the pits, where they would have fallen in and been killed, said Kevin Mcaleese, a curator of archaeology and ethnology at the Provincial Museum of Newfoundland and Labrador. The team did find stones inside the pitfalls that could have injured animals that had fallen inside. However, the archaeologists didn't find any artifacts and were unable to obtain clear radiocarbon dates for the pits.

"No Newfoundland and Labrador aboriginal group or archaeological culture is known in historic times or in ancient times to have regularly trapped animals with pitfalls," Mcaleese said. "I am developing a research plan for the site and area, but have not yet secured funds."

Kent Budden, nephew of Watson Budden, collected a number of what he suspects are Norse artifacts from the Sop's Arm area, including an iron ax and other iron artifacts, as well as a stone that has what could be a serpent carved into it.

Kent Budden died in 2008, and his brother Owen Budden showed photographs of the artifacts to Live Science. (Before he died, Kent Budden also gave a presentation of the collection, which can now be seen on YouTube.)

Mcaleese said he is not very familiar with the collection. "What I have seen does not appear to be Norse, and my colleagues think similarly," he said.

The Vikings also may have settled, at least for a bit, in Nanook on Baffin Island. Researchers recently discovered the remains of a building that may have been constructed by the Vikings and artifacts that may have been used in metalworking. Among the artifacts was a stone crucible that may "represent the earliest evidence of high-temperature nonferrous metalworking in the New World north of Mesoamerica," wrote a team of archaeologists in a paper published in 2014 in the journal Geoarchaeology.

Many Canadian archaeologists condemned Sutherland's abrupt termination and the decision to end the project. They noted that the Canadian government, which owned the museum and funded her project, proceeded to pour millions of dollars into locating and excavating a ship destroyed in 1847 during the ill-fated Franklin expedition. This expedition, led by Sir John Franklin, aimed to find a sea route through the Canadian Arctic between the Atlantic and Pacific Oceans. The expedition ended with the death of Franklin and his crew.

This funding decision led to accusations that the federal government favored research into British remains over those of the Vikings. In 2015, a new federal government was elected, but it remains unknown whether it will fund new research at the Nanook site.

One of the mysteries that researchers have been trying to solve is the location of a place that the Viking sagas call "Vinland" (wine land). Historical texts describe a place where grapes and timber could be found. [In Photos: Viking Voyage Discovered]

Famed Viking explorer Leif Ericson is said to have led an expedition to Vinland. The sagas say that Ericson was so impressed by what he found that he told his crew that, "from now on, we have two jobs on our hands: On one day, we shall gather grapes, and on the next, we shall cut grapevines and chop down the trees to make a cargo for my ship." The stories, as translated by Einar Haugen in the 1942 book "Voyages to Vinland: The First American Saga," go on to say that "Leif gave this country a name to suit its resources: He called it Vinland."

Grapes don't grow as far north as Newfoundland, leaving some researchers to speculate that Vinland is located farther south, possibly around New Brunswick, Nova Scotia or Maine. Others think that Newfoundland is Vinland and that the "grapes" could refer to wild berries, which are found in abundance in Newfoundland.

So far, no potential Viking sites have been discovered south of Newfoundland, although a coin, minted in Norway between A.D. 1065 and 1080, was discovered in Maine in 1957 by an amateur archaeologist at a Native American site. How the coin arrived at that site is a mystery.