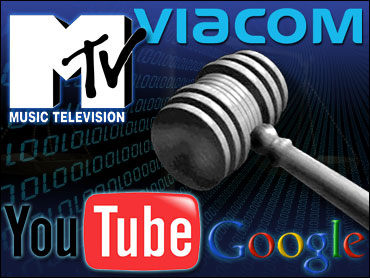 MTV owner Viacom Inc. said Tuesday it has sued YouTube and its corporate parent Google Inc. for alleged copyright infringement and is seeking more than $1 billion in damages.

The complaint contends that roughly 160,000 unauthorized clips of Viacom programming have been available on the popular video-sharing Web site. In addition to MTV, Viacom also owns a number of other cable networks including VH1, Comedy Central and Nickelodeon.

In a statement, Viacom lashed out at YouTube's business practices, saying it has "built a lucrative business out of exploiting the devotion of fans to others' creative works in order to enrich itself and its corporate parent Google."

Viacom said YouTube's business model, "which is based on building traffic and selling advertising off of unlicensed content, is clearly illegal and is in obvious conflict with copyright laws."

In February Viacom demanded that YouTube remove more than 100,000 unauthorized video clips from its site after several months of talks between the companies broke down.

Viacom filed the lawsuit in the U.S. District Court for the Southern District of New York and is also seeking an injunction prohibiting Google and YouTube from using its clips.

A Google spokesperson e-mailed CBS News correspondent Daniel Sieberg saying, "We have not received the lawsuit, but are confident that YouTube has respected the legal rights of copyright holders and believe the courts will agree."

The spokesperson added, "We will certainly not let this suit become a distraction to the continuing growth and strong performance of YouTube and its ability to attract more users, more traffic and build a stronger community."

Under federal copyright law, online services such as YouTube are generally immune from liability as long as it responds to takedown requests such as these, which YouTube often does. Less clear legally is what happens when another user posts the same video, something commonly done on the free video-sharing site.

"YouTube's terms of service prohibit posting copyrighted material without permission, but they don't have an effective way of blocking people if the individuals decide to go ahead and do that," CBS News technology analyst Larry Magid said.

YouTube said in a statement last month that it would comply with the request from Viacom and said it cooperates "with all copyright holders to identify and promptly remove infringing content as soon as we are officially notified."

The company also said it was "unfortunate that Viacom will no longer be able to benefit from YouTube's passionate audience which has helped to promote many of Viacom's shows."

In November, YouTube agreed to delete nearly 30,000 files after the Japan Society for Rights of Authors, Composers and Publishers complained of copyright infringement.

Some media companies such as CBS Corp. and General Electric Co.'s NBC Universal have made deals to allow YouTube to use video clips from their programming, but others have yet to agree with the site over ways to get compensated for the use of their copyrighted material.

Universal Music Group, a division of French telecommunications giant Vivendi SA, had threatened to sue YouTube for copyright infringement, saying it was a hub for pirated music videos, but later reached a licensing deal with them last year.

Despite Viacom's problems with YouTube, the company's MTV Networks division reached a licensing deal last year with Google that allows the search company's video service to use clips from MTV and its sibling networks under a revenue-sharing agreement.