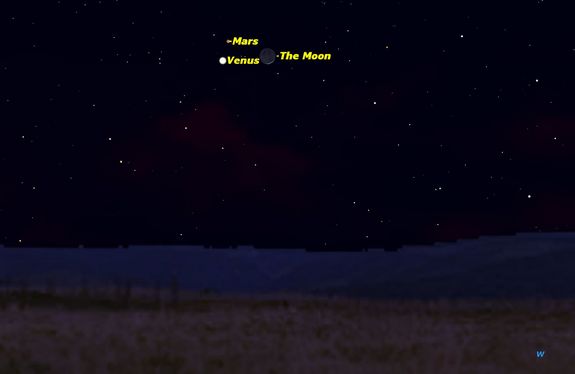 Mars, Venus and the moon will meet up in a particularly beautiful cosmic display starting Friday.

On Friday, the moon, moving much faster than either of the planets, will pass by them, so three hands on the celestial clock will almost coincide. The three cosmic bodies will form a triangle only 2 degrees across, small enough to fit into a low-power telescope's field of view. Mars and Venus were also closely paired in the night sky Thursday. [Watch a video about Mars, Venus and the moon meeting up]

The two planets will pass close to each other on Saturday, but that close encounter will happen in the daylight sky, shielding the meeting from view. The best time to see the two bodies will be the evening before, on Friday.

Currently, both Venus and Mars are on the far side of the sun, so their disks are both very small. Venus is only 12 arc seconds in diameter, and Mars is even smaller, at less than 5 arc seconds. These planets are comparable in size to very small craters on the moon. The lunar surface should be partially lit up by earthlight, sunlight reflected off the planet Earth.

Close groupings like these are wonderful subjects for photography. Zoom your lens to maximum magnification, and try to frame the cosmic bodies with interesting foreground objects. If your camera has automatic exposure, your pictures may come out overexposed, so you may want reduce the exposure to get a more pleasing result.

The solar system is like a giant clock, with the objects orbiting each other in precise time like the clock's hands. The movements of the moon and planets can be predicted accurately for thousands of years into the future.

Many people wonder whether this celestial clock ever reaches the equivalent of exact midnight on a regular clock, with the hour, minute and second hands all aligned. (The moon, Mars and Venus might serve as a good stand in for the three hands of the clock.)

The answer is that this has never happened, not even once, in the 4-billion-year history of the solar system, and will never happen before the sun swells to a red giant more than 4 billion years hence.