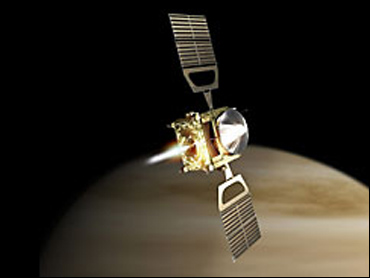 After a 250 million-mile journey, a European space probe reached orbit around Venus on Tuesday on a mission to explore the planet's dense, hot atmosphere.

Mission controllers at the European Space Agency control center in Darmstadt cheered, applauded and embraced as they picked up the signal from the Venus Express craft indicating it had completed the orbital maneuver.

Europe's space program now has craft orbiting two planets in the solar system other than Earth, with the Mars Express probe circling Mars, and yet another craft on its way to land on a comet.

The mission hopes to answer questions about how a planet so similar to Earth could have turned out so differently. Venus' atmosphere is almost 90 times denser than Earth's and shrouded in clouds of sulfuric acid.

The instruments include spectrometers to measure temperature and analyze the atmosphere and a special camera that will concentrate on documenting whether Venus' many volcanoes are active.

Not only is Venus the nearest planet to Earth, the two also share similar mass and density. Both have inner cores of rock and are believed to have formed at roughly the same time.

Despite those similarities, Venus' atmosphere is composed almost entirely of carbon dioxide and very little water vapor. Thanks to runaway warming from its greenhouse effect, Venus has the hottest surface of all the planets, around 864 degrees Fahrenheit.

If everything goes according to plan, the probe will remain active for 500 days, with the possibility of extending its life by another 500, said Hakan Svedhem, the agency's lead scientist on the program.

Venus Express is Europe's first mission to Venus, often referred to as the "Morning Star" because it is visible near the horizon shortly before dawn. It was launched Nov. 9 atop a Russian booster rocket from the Baikonur Cosmodrome in Kazakhstan.

The last mission to Venus was NASA'S Magellan probe, launched in 1989. It completed more than 15,000 orbits around the planet between 1990 and 1994. Using radar, Magellan was able to map almost all of Venus, revealing towering volcanoes, gigantic rifts and sharp-edged craters.

Addicted to your smartphone? How to track your screen time

Finally, a much-needed answer to that terrifying "big chicken" video
Thanks for reading CBS NEWS.
Create your free account or log in
for more features.
View CBS News In
CBS News App Open
Chrome Safari Continue
Be the first to know
Get browser notifications for breaking news, live events, and exclusive reporting.