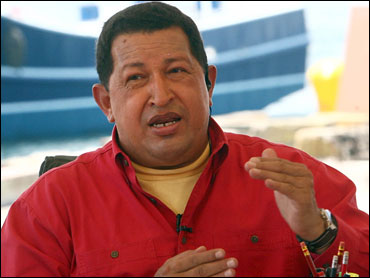 President Hugo Chavez said Sunday that Russian bombers would be welcome in Venezuela but the socialist leader denied that his country would offer Moscow its territory for a military base.

Chavez - a fierce critic of Washington with close ties to Russia and Cuba - said his government did not raise the possibility, as Russian media had reported.

"It's not like that," the president said, responding to a report by Interfax news agency quoting the chief of staff of Russia's long range aviation, Maj. Gen. Anatoly Zhikharev, as saying some strategic bombers could be based on an island offered by Venezuela.

Zhikharev reportedly said Saturday that Chavez had offered "a whole island with an airdrome, which we can use as a temporary base for strategic bombers."

Speaking during his weekly television and radio program, Chavez said he told Russian President Dmitry Medvedev that his nation's bombers would be allowed to land in Venezuela if necessary, but no such plans have been made.

"I told President Medvedev that any time Russia's strategic aviation needs to make a stop in Venezuela as part of its strategic plans, Venezuela is available," he said.

Interfax also reported that Zhikharev said Russian bombers could be based in communist-led Cuba, but a Kremlin official said Zhikharev had been speaking hypothetically.

Kremlin official Alexei Pavlov responded to the report on Saturday, saying that "the military is speaking about technical possibilities, that's all."

"If there will be a development of the situation, then we can comment," Pavlov said.

Venezuela and Cuba have close political and energy relations with Russia, which has been working to reassert itself as a military force.

Russia resumed long-range bomber patrols in 2007 after a 15-year hiatus.

During Sunday's program, Chavez said his government may expand a military base on the Caribbean island of La Orchila, approximately 110 miles (180 kilometers) off the South American country's central coast.

"It's a strategic point, but not just for a naval base. It's also an economic zone," he said, noting that installations for fishermen could be constructed.

La Orchila is already home to a small military base, including helicopter landing pads and docks, as well as a presidential residence.