(CBS)
Venezuela was one of three countries that emerged from the collapse of Gran Colombia in 1830 (the others being Ecuador and New Granada, which became Colombia).

For most of the first half of the 20th century, Venezuela was ruled by generally benevolent military strongmen, who promoted the oil industry and allowed for some social reforms. Democratically elected governments have held sway since 1959.

Hugo CHAVEZ, president since 1999, has promoted a controversial policy of "democratic socialism," which purports to alleviate social ills while at the same time attacking globalization and undermining regional stability.

Current concerns include: a weakening of democratic institutions, political polarization, a politicized military, drug-related violence along the Colombian border, increasing internal drug consumption, overdependence on the petroleum industry with its price fluctuations, and irresponsible mining operations that are endangering the rain forest and indigenous peoples. 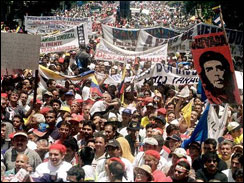 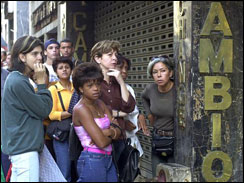 Venezuela remains highly dependent on oil revenues, which account for roughly 90% of export earnings, more than 50% of the federal budget revenues, and around 30% of GDP. Tax collection - Venezuela's primary source of non-oil revenue - is expected to surpass $23 billion in 2006, exceeding the yearend collection goal by more than 20%. A nationwide strike between December 2002 and February 2003 had far-reaching economic consequences - real GDP declined by around 9% in 2002 and 8% in 2003 - but economic output since then has recovered strongly. Fueled by higher oil prices, record government spending helped to boost GDP growth in 2004 and 2005 to approximately 18% and 11%, respectively. Economic growth in 2006 reached about 9%. This spending, combined with recent minimum wage hikes and improved access to domestic credit, has fueled a consumption boom - car sales in 2006 increased by around 70% - but has come at the cost of higher inflation. Despite government attempts to withdraw liquidity from the economy, Venezuela's money supply set a record in June 2006, approximately 70% higher than the previous year. Imports have also jumped significantly.

Images from the field, the stands and the streets as Germany hosted soccer's main event.

Across Latin America
Follow President Bush on his five-nation tour.