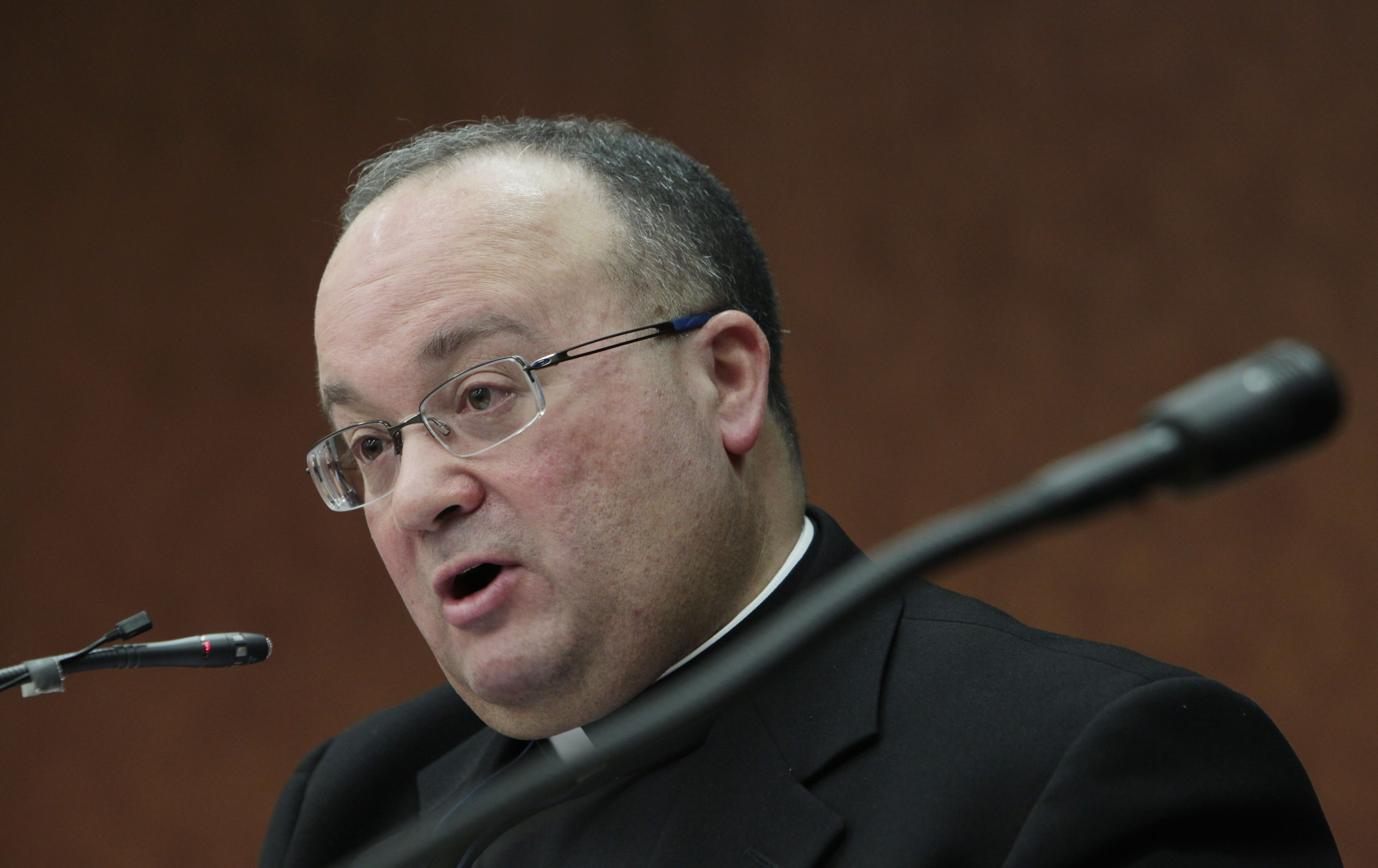 VATICAN CITY -- The Vatican is gearing up for a bruising showdown over the global priest sex abuse scandal, forced for the first time to defend itself at length and in public against allegations it enabled the rape of thousands of children by protecting pedophile priests and its own reputation at the expense of victims.

The Holy See on Thursday will be grilled by a U.N. committee in Geneva on its implementation of the U.N. Convention on the Rights of the Child. Among other things, the treaty calls for signatories to take all appropriate measures to protect children from harm and to put children's interests above all else.

The Holy See ratified the convention in 1990 and submitted a first implementation report in 1994. But it didn't provide progress reports for nearly a decade, and only submitted one in 2012 after coming under criticism following the 2010 explosion of child sex abuse cases in Europe and beyond.

Victims groups and human rights organizations rallied together to press the U.N. committee to challenge the Holy See on its abuse record, providing written testimony from victims and evidence outlining the global scale of the problem. Their reports cite case studies in Mexico and Britain, grand jury investigations in the U.S., and government fact-finding inquiries from Canada to Ireland to Australia that detail how the Vatican's policies, its culture of secrecy and fear of scandal contributed to the problem.

Their submissions reference Vatican documents that show its officials knew about a notorious Mexican molester decades before taking action. They cite correspondence from a Vatican cardinal praising a French bishop's decision to protect his abusive priest, and another Vatican directive to Irish bishops to strike any mandatory reporting of abusers to police from their policies. The submissions even quote the former Vatican No. 2 as saying bishops shouldn't be expected to turn their priests in.

"For too many years, survivors were the only ones speaking out about this and bearing the brunt of a lot of criticism," said Pam Spees, a human rights attorney for the Center for Constitutional Rights, which provided a key report to the committee. "And so this is a very important moment for many, many people who are here in Geneva and around the world who will be watching as the Holy See is called for the first time ever to actually answer questions."

Indeed, to date the Holy See has never had to defend its record to any large extent or in court since it has successfully argued that it is immune from lawsuits as a sovereign state and that, regardless, bishops were responsible for pedophile priests in their care, not the pope or his policies. While the Holy See has had to answer some questions about abuse at the separate U.N. Human Rights Council, this is the first U.N. hearing dedicated to the issue and the Vatican was compelled to submit to it as a signatory of the convention. Officials have privately said they are hoping at best to do damage control at Thursday's session.

Last year, Cardinal Timothy Dolan told CBS News that the U.S. Catholic Church of the United States was on "the right track" in the wake of the scandal surrounding decades of child sexual abuse by priests and senior clergy's moves to hide it from public view.

Dolan said the Church in the U.S. had learned from its mistakes in handling the abusive priests and tackled the problem during the last decade. "We didn't do it right back then, but now I think we are."

The U.N. committee, which is composed of independent experts, not other U.N. member states, will issue its final observations and recommendations Feb. 5. The recommendations are not binding and the committee has no ability to sanction the Vatican for any shortcomings. Rather, the process is aimed at encouraging - and occasionally shaming - treaty signatories into abiding by their international commitments.

The Vatican will be represented by its most authoritative official on the issue, Monsignor Charles Scicluna, for a decade the Holy See's chief sex crimes prosecutor. He is credited with having overhauled the Vatican's procedures to better prosecute pedophiles in-house. But the Vatican to date has refused to instruct its bishops to report suspected cases of abuse to police, saying they need only do so when required by local laws.

"When abusers are in jail, they don't harm kids," said Miguel Hurtado, a member of the main U.S.-based victims' advocacy group SNAP, who said he was abused by a priest in the Catholic youth group he attended as a youngster in Catalonia, Spain. "And they failed to do that."

Hurtado and Spees spoke to U.N. correspondents in Geneva before Thursday's session, during which the Vatican will be asked about its overall policies, what it has done to protect children and specific cases including the mistreatment of seminarians in the disgraced Legion of Christ religious order, which is currently being run by the Vatican itself.

The committee had also asked the Holy See to provide detailed information on all cases of abuse that were brought to its attention - a number the Vatican has acknowledged tops 4,000.

But in its written response to the committee submitted last month, the Vatican declined to provide such information and ducked many of the committee's questions. It argued that it was not responsible for the actions of every Catholic, much less every priest or parish in the world. It says it is really only responsible for implementing the U.N. treaty where it exercises territorial control: the 44 hectares (110 acres) of the Vatican City State in downtown Rome, where 31 children currently live.

"This representation by the Holy See is particularly disingenuous in light of the all-too-numerous accounts of efforts by bishops, archbishops, cardinals and other church officials around the world to cover up these crimes and subvert the course of justice in other states, further compounding the harm to victims," the Center for Constitutional Rights and SNAP said in response. They accused the Vatican of failing to acknowledge the "authority, control and oversight it exercises" over church institutions and personnel worldwide.

While arguing that its jurisdiction is limited to the Vatican City State, the Holy See at the same time sought to highlight the ways in which it has promoted programs to protect children and keep pedophiles out of the priesthood. Bishops' conferences are now required to have guidelines to fight abuse. Last month, Pope Francis established a commission to study best practices and the Vatican last summer updated its local laws to criminalize abuse of children.

However, some abuse victims in the U.S. said they were disgusted that cardinals who covered up abuse in their own dioceses helped elect the pope.


Meanwhile, the Archdiocese of Chicago on Wednesday will hand over thousands of pages documenting clergy sex abuse allegations to victims' attorneys who have fought for years to hold the Catholic Church accountable for its handling of such claims.

The files on the nation's third-largest archdiocese will include complaints, personnel documents and other files for about 30 priests with substantiated abuse allegations.

Victims' attorneys next week will make public the documents detailing allegations of crimes concealed and priests assigned to positions that allowed them to continue molesting children.

Disclosures in other U.S. dioceses in recent years have showed how the church shielded priests and failed to report child sex abuse to authorities.

Chicago officials said most of the abuse occurred before 1988 and none after 1996.

"Until there is public disclosure and transparency ... there is no way people can learn about it and make sure it does not happen again," said attorney Marc Pearlman, who has represented about 200 abuse victims of clergy abuse in the Chicago area.