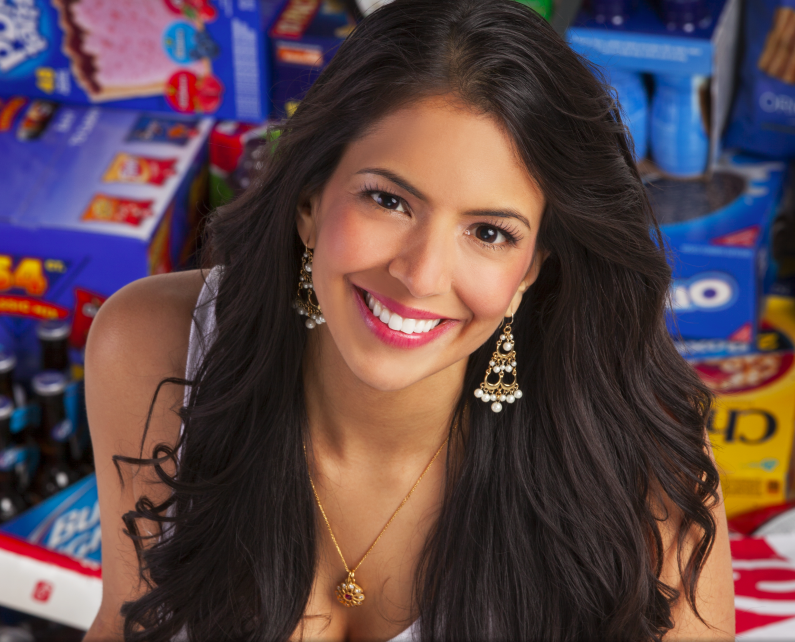 If you watch television or surf the Internet, there's a good chance you've heard of Vani Hari. And even if you don't know her name, if you eat, you've likely been touched by her work. With her winning smile and booming voice, the blogger and activist known as "The Food Babe" has become a powerful force fighting against the dangers of processed foods.

Hari says her sometimes inciting blog, foodbabe.com, in which she investigates and exposes ingredients in processed and fast foods, attracted over 52 million hits last year alone.

Now with a bestselling book that promises to help you "break free from the hidden toxins in your food, and lose weight, look years younger, and get healthy in just 21 days" -- entitled "The Food Babe Way" -- Hari is making the rounds on mainstream media promoting her healthy eating lifestyle.

But Hari is not a nutritionist, a doctor, or a dietician. She's a computer science major from North Carolina who, upon graduating, went to work in the corporate world. So, how did she become "The Food Babe" and amass enough power to generate upwards of 350,000 signatures on a petition calling for Kraft to remove yellow dyes from their macaroni and cheese?

Hari tells CBS News, she grew up on a standard American diet of processed foods and ate a lot of fast food as a child. She was heavy and had various health problems including asthma and digestive problems.

"I was like a zombie walking through life, I never knew what it felt to have true energy and true vibrance," she says.

Once she stopped eating fast food and began eating fresher, natural foods, she became healthier and her appearance changed -- she lost weight and developed a healthy glow. In a post on her blog she displays some compelling before and after photos. She explains that these personal experiences compelled her to investigate what's really in the food we're eating and to advocate for transparency and accountability from big food companies.

Early in her blogging career, Hari says she was horrified at the many not-so-natural sounding ingredients that she discovered were in a Chick-fil-A sandwich. She wrote a blog post about it, called "Chemical-fil-A or Chick-fil-A?" This post went viral, and soon after, Chick-fil-A invited Hari out to their headquarters where she says she voiced her main concern-- stop serving chicken with antibiotics.

There is growing concern that meat and poultry raised with antibiotics may be partly responsible for the development of drug resistant superbugs in humans, which the Centers for Disease Control and Prevention estimate cause 23,000 deaths and 2 million illnesses each year in the United States.

According to Hari, Chick-fil-A said at the time that it was impossible to go completely antibiotic-free with their chicken. But the company eventually changed its mind. In a February 2014 Chick-fil-A press release that made no mention of Hari, the company stated it would transition to serving antibiotic-free chicken within five years.

"A shift this significant will take some time, as it requires changes along every point of the supply chain - from the hatchery to the processing plant. Our suppliers are committed, and we pledge to have this conversion complete within five years or sooner based on supply chain readiness," Tim Tassopoulos, Chick-fil-A's executive vice president of operations, said in a press release.

Fast food companies have taken a hit over the past few years. As customers gravitate toward fresher, higher quality 'fast-casual' restaurants like Chipotle, fast food giants like McDonalds are losing business. Meanwhile, Chipotle's revenue has increased steadily over the past five years.

Now, a range of food companies are being forced to respond to the demands of customers' changing preferences as well as some government intervention. Last week, the White House announced a five-year plan to reduce the threat caused by drug resistant bacteria, a plan which includes increasing funding to the Department of Agriculture to reduce the use of antibiotics in livestock.

Earlier this month, industry heavy-hitter McDonald's announced it would stop serving chicken with antibiotics. Even megastore Costco is responding to the growing concerns and claims it's working towards eliminating the sale of meat raised with human antibiotics.

While Hari does not take credit for McDonald's or Costco's policy changes, her outspoken activism, many media appearances and popular petitions may be helping to build the momentum needed to get the government and food industry leaders to take notice.

On another front, Hari's concern over Kraft using yellow dye numbers 5 and 6 prompted her to produce a video calling for people to sign a change.org petition. In her video, she spoke about research that shows these dyes are linked to hyperactivity in children, and she noted that Kraft had already reformulated their products for some markets overseas that prohibit yellow 5 and yellow 6. Her petition garnered over 365,000 signatures.

In late 2013, Kraft pledged to remove these dyes from their popular children's shaped macaroni and cheeses by 2014. And on April 20, 2015, the company announced plans to drop the dyes and artificial preservatives from its classic mac & cheese. "We finally did it!" Hari proclaimed on her blog.

Hari's efforts have won praise from Rep. Tim Ryan, D-Ohio, who commends her for her ability to get people's attention. He says the government also needs to step up to ensure better regulatory practices within the food industry.

"The problem with the FDA is that it is so underfunded and there aren't enough people there to actually monitor at the kind of level that we really need to to understand what's in our food," the congressman told CBS News.

While the FDA is loaded down with more and more ingredients to test and less funding to do so, Hari says consumers must be their own advocates.

"One of the most fundamental things consumers can do is to vote with your dollars. So when you make a purchasing decision at the grocery store, think about who you're supporting. Are you supporting the junk food companies that are allowing obesity and heart disease and diabetes to increase? Or are you supporting an organic farmer? Really think about that, because every choice you make impacts the world around you," she says.

Though Hari has attracted many loyal followers, not everyone is signing up for the Food Babe army. Hari's sometimes inflammatory blog posts have some critics calling her a quack and accusing her of bullying companies into changing their policies.

Oncologist Steven Gorski writes on his blog sciencebasedmedicine.org, "She is a seeming never ending font of misinformation and fear mongering about food ingredients, particularly any ingredient with a scary 'chemically' sounding name."

And a recent NPR story quoted Yale neuroscientist and prominent opponent of pseudoscience Steve Novella, who likened Hari to the "Jenny McCarthy of food." after the celebrity known for her vocal stance against vaccinating children; McCarthy's claims are not backed by scientific research.

Hari admits she's no scientist and she does sometimes get things wrong. Recently, she wrote a lengthy response addressing many of the criticisms made toward her. Additionally, she has started to include an editor's note at the end of a blog citing mistakes and changes.

Love her or hate her, one thing seems certain: Vani Hari is a woman determined to create a healthier world. And this force of nature shows no signs of slowing down.