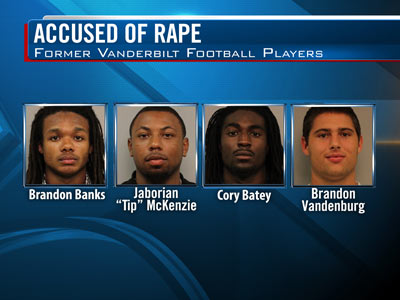 Brandon Vandenburg, Cory Batey, Brandon Banks, and Jaborian "Tip" McKenzie will reportedly not be in the courtroom for the hearing. McKenzie has already entered a "not guilty" plea, and waived his right to an arraignment. Attorneys for the three other former football players will enter pleas on behalf of the defendants.

Officials with the Metro Nashville Police Department said the four defendants raped an unconscious victim inside Vandenburg's room at his Gillette House dorm in the early morning hours of Sunday, June 23.

The university was made aware of the situation when officials observing the dorm's hallway surveillance recordings for an unrelated situation saw concerning behavior by the defendants, the station reports.

Vanderbilt dismissed the players June 29 and kicked them off campus pending the investigation by the Metro Nashville Police Department's sex crimes unit.

Boyd was later charged with being an accessory after the fact in the case. Police said he took part in an attempted cover up of the sexual assault through his advice to certain defendants who were already indicted in the case, the station reports.

On Friday, two other California men were also indicted in connection with the case. Nineteen-year-old Miles Joseph Finley and 20-year-old Joseph Dominick Quinzio, both of California, were charged with one felony count each of tampering with evidence. Police said Finley and Quinzio are acquaintances of defendant Brandon Vandenburg.

Finley and Quinzio are accused of tampering with certain electronic evidence in the case, the station reports. Both remain jailed in California on $150,000 each and are awaiting extradition to Tennessee.

Banks, McKenzie, and Batey are free on bond. Vandenburg remains in jail in lieu of $350,000 bond.