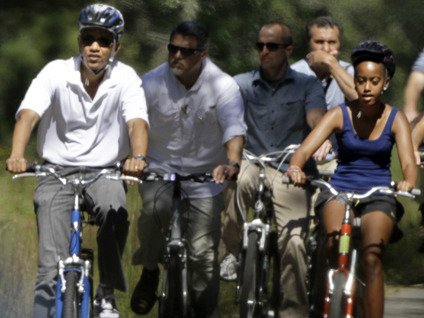 "We are told Bloomberg and Obama talked in the clubhouse for about 15 mins about the economy," a pool report said. "They then went to the driving range and are about to begin their round." The president earlier in the day went on a bike ride with daughter Malia. (See at left.)

As of today, according to CBS News White House correspondent and unofficial White House statistician Mark Knoller, the president has played 49 rounds of golf since taking office, including five times on this vacation. That does not include a round of mini-golf he played earlier this month with daughter Sasha.

President George W Bush played 24 rounds of golf during the first two and a half years of his presidency and then stopped, feeling it was inappropriate for the Commander-in-Chief to be seen playing golf while the nation was at war in Iraq and Afghanistan. His last game of golf as president was on Oct 13, 2003.

Bloomberg appeared on last night's "Daily Show with Jon Stewart," where he once again stated his support for the so-called "Ground Zero mosque" - the proposed Islamic cultural center two blocks fro the former site of the World Trade Center. (Watch at left.)

"When I went to school, we studied the Constitution," he told Stewart. "It says you have a right to say what you want to say, which means pray to whomever you want, whenever you want, wherever you want. And it's just not the government's business to tell you what to say."