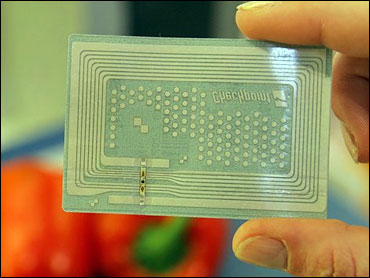 (AP Photo/Eckehard Schulz)
The Virgina House of Delegates on Wednesday approved a measure that could protect Virginia residents from overbearing employers, and possibly the apocalypse.

The law would make it illegal to implant an identification or tracking device into a person's body without their written consent. As the use of implanted microchips becomes more common -- people use them to track pets and could possibly use them for purposes such as securing one's medical history -- lawmakers are starting to address concerns. Some are concerned their use among humans would lead to a lack of privacy or abuse from employers. Others, the Washington Post reports, are also concerned the use of microchips could be the "mark of the beast" -- or the coming of the antichrist.

"My understanding -- I'm not a theologian -- but there's a prophecy in the Bible that says you'll have to receive a mark, or you can neither buy nor sell things in end times," Del. Mark L. Cole, the bill's sponsor, told the Post. "Some people think these computer chips might be that mark."

Cole reportedly said that he primarily sponsored the bill because of the privacy issues.

"I just think you should have the right to control your own body," he said.

Yet some fundamentalist Christians see more serious concerns in the Book of Revelation in the Bible, which reads, "He causeth all, both small and great, rich and poor, free and bond, to receive a mark in their right hand, or in their foreheads: And that no man might buy or sell, save he that had the mark, or the name of the beast, or the number of his name."

Those opposed to the legislation mocked the connection to the Bible story. Del. Robert Brink reportedly said he never heard voters on the campaign trail mention any concerns about microchips.

"I didn't hear anything about the danger of asteroids striking the Earth, about the threat posed by giant alligators in our cities' sewer systems or about the menace of forced implantation of microchips in human beings," he said.

Some other states, including Georgia and Tennessee, are considering similar measures. A couple of states including California and Wisconsin have already passed similar laws.