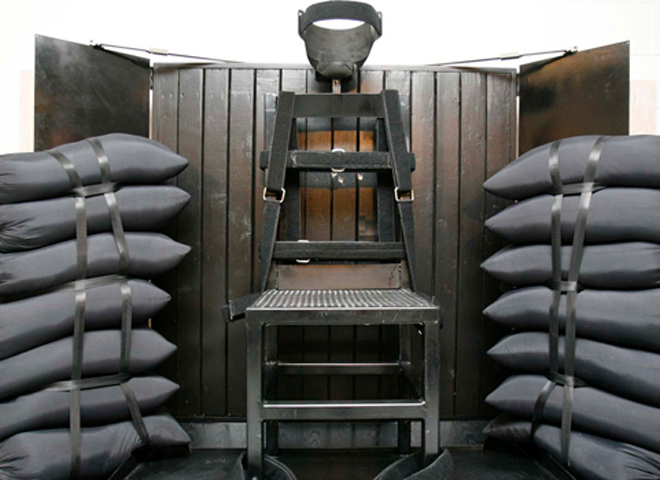 SALT LAKE CITY -- A Republican lawmaker who shepherded a longshot push to abolish the death penalty in conservative Utah said Thursday night he was abandoning the effort, saying he didn't have enough time or votes to pass the measure before a midnight deadline.

Urquhart said that he believed he came close to getting enough support, but there were enough lawmakers on the fence in the GOP-controlled House of Representatives that the debate would have taken hours and irritated legislators.

"When you're ticking people off with your legislation, they don't come your way," he said.

Urquhart said he had considered a last-minute push for a moratorium instead, but there wasn't enough support.

The legislative session ends at midnight.

Shortly before Urquhart said he was ending the push, the older brother of the last man executed in Utah interrupted legislators by shouting at them from the gallery in the House of Representatives.

His younger brother, Ronnie Lee Gardner, was executed in 2010 by firing squad. He killed a bartender and later shot a lawyer to death and wounded a bailiff during a 1985 courthouse escape attempt.

"Nobody has the right to do that to somebody. I don't care who he is and what he did," Gardner said.

Legislative security removed the banner and took Gardner outside in handcuffs. He told reporters he was upset that it appeared they may not vote on the repeal.

"The state murdered him, and I'm just tired of it," he said, according to KUTV. "I'm a victim of this. Very bad, I'm damaged. I have post-traumatic stress disorder. I have nightmares every night."

The measure was originally believed to meet quick roadblocks in Utah's GOP-dominated Legislature, but it cleared the Senate and then squeaked through a House committee this week.

Even if it passed, the measure faced an uncertain future with Republican Gov. Gary Herbert, who supports capital punishment in extreme cases but wouldn't say if he would veto the measure.

Nineteen other states and the District of Columbia have abolished capital punishment, and lawmakers, including Republicans, in more than half a dozen other states have suggested their states should do the same.

Urquhart initially said his proposal would be a longshot and acknowledged the strong support of capital punishment in the state. But in recent weeks, Urquhart said he believed the libertarian-leaning Legislature would pass the proposal.

Death penalty supporters argued Urquhart's repeal would leave prosecutors shortchanged at the bargaining table, where they would otherwise negotiate a plea deal of a life sentence without parole in lieu of execution.

Other critics said that for especially heinous crimes, execution is a just punishment.

Conservative Republicans who favor abolishing the practice said they have no problem in theory with the idea of execution for a horrible crime, but they felt years of appeals delayed any justice. Others cited worries that the government could execute someone wrongly convicted.

Last year's resurrection of the practice makes it an option for all death row inmates, if drug cannot be obtained 30 days before their execution. Utah is the only state in four decades to carry out such a death sentence, with three executions by firing squad since the U.S. Supreme Court reinstated the death penalty in 1976.

Nebraska's Republican-controlled Legislature voted last year to abolish the death penalty over a veto from that state's GOP governor. It became the first traditionally conservative state to eliminate the punishment since North Dakota dropped the practice in 1973. But death penalty supporters quickly launched a petition drive, leaving Nebraska voters to decide the issue this November.

Proposals to repeal capital punishment have been introduced in at least eight other states over the past year, though it's unclear how many are anywhere close to being approved.