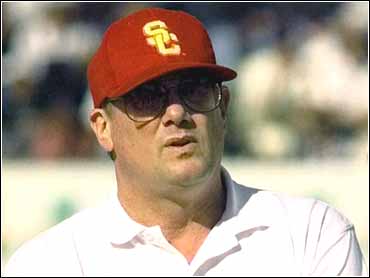 Paul Hackett was fired as Southern California's football coach Monday, two days after the Trojans completed their first losing season since 1991 and just their third in the last 39 years.

Hackett had two years remaining on the five-year contract he signed in 1997 as the successor to John Robinson. It's believed Hackett, an assistant under Robinson at USC from 1976-80, is being paid a buyout estimated at $800,000.

The school said a search for a new coach will begin immediately.

Hackett was to speak at a news conference later in the day.

"Unfortunately, his hard work over the past three years has not translated into success on the field," athletic director Mike Garrett said. "He has not made the consistent progress that we expect at USC."

It was a year that began with great promise when the Trojans opened with wins over Penn State, Colorado and San Jose State to rise to eighth in the rankings.

However, a 31-21 loss at No. 5 Oregon State in the Pac-10 opener followed, triggering USC's first last-place finish in the conference. The Trojans actually wound up tied for the cellar in the Pac-10 with a 2-6 record, including losses at home to California and Washington State.

Hackett's fate probably was sealed with a five-game losing streak this season. If there was any hope, it most likely was snuffed out with the 33-27 loss to Washington State on Nov. 11.

The Trojans topped crosstown rival UCLA 38-35 a week later, giving them an opportunity to beat the Bruins and Notre Dame in the same year for the first time since 1981. However, mistakes played a major role in a 38-21 loss to the No. 11 Fighting Irish on Saturday before a crowd of 81,342 at the Coliseum.

The Trojans had two punts blocked that Notre Dame turned into touchdowns, and committed three turnovers, giving them 36 for the season compared to 17 for the opposition. The kicking game was a mess all year, and careless penalties and clock mismanagement also cropped up often.

Hackett refused to discuss his job status after the game, saying there would be plenty of time for that. When asked if he thought he deserved to return, he angrily replied: "Are you out of your mind? Of course I do."

Garrett said he needed "to deliberate and make a decision" as he left the locker room. As it turned out, he didn't need much time.

The firing leaves three coaching vacancies in the Pac-10 Arizona State's Bruce Snyder was fired this month, and Arizona's Dick Tomey resigned after a loss to ASU on Friday.

Hackett is the fourth consecutive coach to be fired at USC. The football team has often been mediocre since John McKay left after 16 seasons following the 1975 campaign with a record of 127-40-8, and Robinson stepped down seven years later with a 67-14-2 record.

Hackett has had one other college head coaching job, at Pittsburgh, where his teams were 12-20-1 in three years before he was fired following the 1992 season. He then was the offensive coordinator for the Kansas City Chiefs for five years before being hired by USC.

USC has won eight national championships, but none since 1978. The Trojans have played in 28 Rose Bowl games, winning 20, but have played in only one since going to three straight following the 1987, 1988 and 1989 seasons.

Carson Palmer, who tied a school record by throwing 18 interceptions, recently expressed hope that Hackett would return, as did other players.

"He's not the problem for this team, the team is the problem," linebacker Zeke Moreno said. "It's going to be hard to go through another transition. He's a good coach."