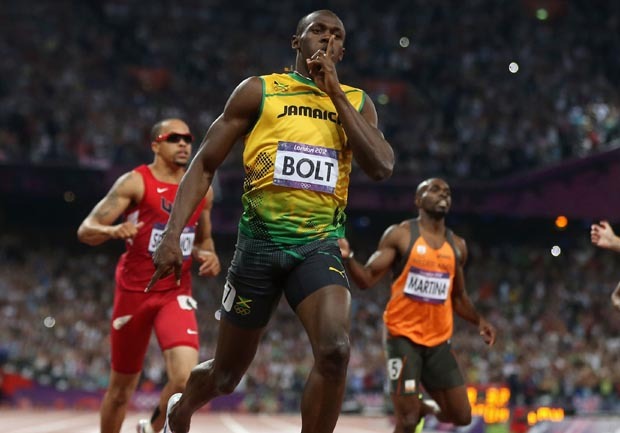 (AP) LONDON - Usain Bolt backed up his billing as a "living legend" by winning the Olympic 200 meters and becoming the first athlete to repeat as double Olympic sprint champion.

"It's what I came here to do. I'm now a legend," Bolt said. "I'm also the greatest athlete to live. I've got nothing left to prove."

Undaunted by the first world record of the Olympic track meet run by 800-meter winner David Rudisha less than an hour before the 200 final, Bolt was not about to be upstaged by anyone.

He dominated his favorite event almost from the starting gun and had enough of a lead to slow down at the line, bring his left index finger to his mouth and signal a "ssssshhh" that was broadcast around the globe.

It should certainly silence the critics who doubted his form ahead of the Olympics. But he didn't stand a chance of hushing the 80,000-capacity crowd at the Olympic Stadium, which went wild as Bolt delivered on his promise of winning when it counts most.

His 19.32-second winning time was just .02 seconds outside his winning mark at the Beijing Olympics.

Just like Sunday's victory in the 100, his junior training partner Yohan Blake stayed closest, and Warren Weir made it a full Jamaican medal sweep before Wallace Spearmon of the United States crossed in fourth place.

"The guy is just on another planet right now," Spearmon said of Bolt.

Bolt kissed the track twice before striking his trademark "To the World" pose, pointing both his index fingers upward to show what he had achieved.

He can still make it 6-for-6 at two Olympics if he leads his nation to victory in the relay.

His win in the 100 seemed to lighten his burden in his more favored event.

He discarded the black woolen hat he wore before his races in the 100, which reflected his mood and the cold conditions.

Thursday's weather of 23C (73F) and a shot at the double-double brought out the Bolt of old. Wearing a Jamaica-yellow cap backwards and joking with his kit volunteer, he made the pre-race activities feel like a small-town Caribbean weekend track meet.

Next to him, Blake was all intensity and concentration. But it wasn't enough to upstage Bolt like he did at the Jamaican trials.

Rudisha was just as confident as Bolt. He predicted a world record and delivered with an overpowering show of front-running to win the 800 title.

When many were still hoping that Bolt would set such a world mark in the 200 later Thursday, the Kenyan stole some of the Jamaican sprinter's thunder at the beginning of a balmy evening suited for setting great times.

Rudisha set off with his giant strides from the starting gun, immediately took the lead and steadily built on it, as many of the year's greatest middle distance runners could never even get close.

The decathlon traditionally crowns "the world's greatest athlete" but for Ashton Eaton it was tough to get much attention on a night when Bolt and Rudisha were dominant.

The United States had another 1-2 finish when Christian Taylor won the triple jump gold medal, overhauling U.S. teammate Will Claye with his fourth jump in the final.

It left the United States atop the track and field medal standings, with seven gold and 24 overall, still on target to meet its goal of 30.

Jamaica's sweep in the 200 helped the Caribbean nation of 2.9 million people join Russia in second place on the gold medal standings with three apiece.