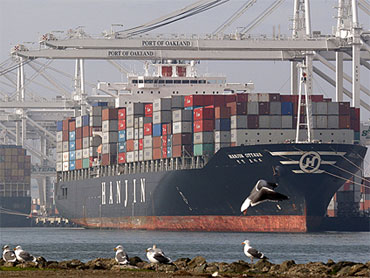 The U.S. trade deficit jumped to the highest level in 10 months as an improving U.S. economy pushed up demand for imports. However, exports rose as well, boosted by a weaker dollar, supporting the view that American manufacturers will be helped by a rebounding global economy.

The Commerce Department reported Tuesday that the trade deficit jumped 9.7 percent to $36.4 billion in November, a bigger imbalance than the $34.5 billion deficit economists had forecast.

Exports rose 0.9 percent, the seventh consecutive gain, as demand was up for American-made autos, farm products and industrial machinery. Imports, however, rose a much faster 2.6 percent, led by a 7.3 percent rise in petroleum imports.

The politically sensitive deficit with China narrowed by 10.8 percent in November to $20.2 billion as U.S. exports to China hit an all-time high. Through November, the deficit with China is still the largest the United States incurs with any country but it is down 15.9 percent from the same period in 2008.

American manufacturers contend China is unfairly manipulating the value of its currency to gain trade advantages, a point President Barack Obama raised with Chinese leaders during his November visit to that country.

Through the first 11 months of 2009, the overall U.S. trade deficit in 2009 was running at an annual rate of $371.59 billion, down by nearly half from last year's imbalance of $695.94 billion. That improvement reflected a deep recession in the United States which cut sharply into consumer demand for foreign products.

But as the U.S. economy has begun to mount a recovery from the worst downturn since the Great Depression of the 1930s, imports have started to rise. Economists expect that development will continue in 2010 and they are predicting a higher trade deficit as a result.

However, they also contend that the fortunes of American manufacturers will be lifted by a continued rise in demand for U.S. exports as America's major overseas markets mount a recovery as well. The fall in the dollar against most major currencies since the U.S. currency hit a 2009 high last March is also expected to boost export sales.

Economists are looking for strong gains in exports to help manufacturers and the overall economy in 2010.

For November, the 0.9 percent rise in exports pushed them to $138.24 billion, the highest level for exports in a year.

Shipments of farm products were up $1.28 billion led by a big gain in sales of soybeans. Exports of capital products including semiconductors, industrial machinery and computers rose by $360 million while sales of U.S.-made autos and auto parts rose by $714 million.

Imports of computers, telecommunications equipment and industrial machinery were all up but imports of autos and auto parts fell by $54 million.

The expectation is that while imports will be rising in coming months, the gains in exports will continue as well, reflecting a rebounding global economy and the weaker dollar.