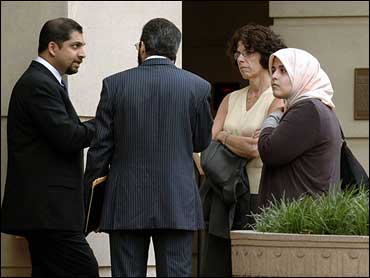 A suspected terrorist accused of conspiring to assassinate President Bush said he proposed the plot but it wasn't pursued, and he was frustrated that other members of his al Qaeda cell lacked initiative, according to U.S. prosecutors.

A government motion unsealed this week by a federal judge reveals new details in the case against Ahmed Omar Abu Ali, 24, who is scheduled to go on trial next month.

Prosecutors say the Falls Church, Va., resident has admitted joining al Qaeda while attending college in Saudi Arabia and that he discussed numerous terrorist plots, including plans to assassinate Mr. Bush and hijack airplanes. Abu Ali says he was tortured into giving a false confession by Saudi authorities and that U.S. officials aided the torture. His lawyers are asking to have the confession tossed out.

The motion says that Abu Ali, a U.S. citizen, was asked to research the location of U.S. nuclear power sites for possible attack. The request was made by the second-highest ranking al Qaeda operative in Saudi Arabia, Sultan Jubran Sultan al-Qahtani, according to the motion.

Also, Assistant U.S. Attorney David Laufman writes in the motion that Abu Ali was frustrated and bored during a stay at an al Qaeda safe house "because his fellow al Qaeda cell members did not appear sufficiently motivated to suit the defendant's terrorist zeal."

In an initial interrogation by Saudi authorities, Abu Ali said that after a May 2003 al Qaeda attack in Riyadh he organized the cell into a more structured daily regimen at the safe house "because, as I said to the guys, we were wasting our time sleeping and engaging in idle chit chat." The attack killed 39 people, including nine Americans.

Prosecutors said Abu Ali's admission that he proposed the Bush assassination plot came in response to a question posed by Saudi authorities at the request of the FBI.

When Abu Ali was asked, "Were you tasked to assassinate the President?" he replied, "I came up with the idea on my own, but it did not get beyond the idea stage. I wanted to be the brain, the planner, just like (reputed Sept. 11 attack masterminds) Mohammed Atta and Khalid Sheikh Mohammad."

The government motion was in response to defense claims that the case against Abu Ali should be thrown out because the confession was obtained through torture and that U.S. authorities acted in concert with the Saudis. The government contends that Abu Ali's June 2003 arrest, interrogation and confession resulted from an independent Saudi crackdown on al Qaeda following the Riyadh bombings and that FBI requests to question Abu Ali directly were rejected.

Abu Ali's Saudi interrogators have already given depositions in which they testified that Abu Ali was relaxed and well cared for when he confessed. Defense lawyers objected to the depositions, saying the interrogators would be under pressure to lie about Abu Ali's treatment.

The government denies that Abu Ali was mistreated and says he invented the torture allegation to escape justice.

"The defendant in this case represents one of the most dangerous terrorist threats that America faces in the perilous world after Sept. 11, 2001: an al Qaeda operative born and raised in the United States, trained and committed to carry out deadly attacks on American soil," Laufman wrote.