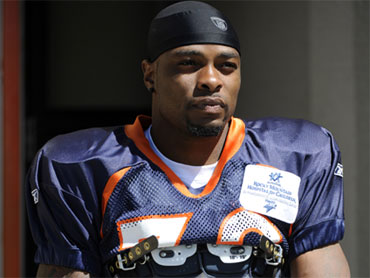 The percentage of Americans who think the space shuttle program is worth continuing has dropped in a CBS News poll to its lowest level in two decades.

The poll of 1,222 adults was conducted from July 29 to Aug. 2, and so respondents did not consider Wednesday's repair job on the shuttle. It has a margin of sampling error of plus or minus 3 percentage points.

Astronaut Stephen Robinson, who is back on the shuttle Discovery, said both pieces came out easily during the spacewalk, which lasted just under six hours. He did not have to use a makeshift hacksaw put together in orbit that he brought along just in case.

"That came out very easily, probably even less force," Robinson said of the second piece. "I don't see any more gap filler. ... I'm doing my own inspection here. It is a very nice orbital belly."

NASA officials had determined that the exposed ceramic-fiber fillers could lead to overheating and a possible repeat of Columbia's disastrous re-entry.

CBS News Correspondent Mark Strassmann reports that for NASA, the repair was "picture-perfect."

"I was absolutely relieved," shuttle flight director Paul Hill told reporters. "I think you could hear the sigh of relief throughout the building over there. Anyone watching had to be impressed."

Although this was the first time an astronaut has ventured beneath the ship, CBS News Space Consultant Bill Harwood called the emergency repair job "a piece of cake."

Discovery, set to land Monday, is the first shuttle to return to orbit since the tragedy. So, Harwood says, NASA's doing all it can to ensure a safe landing.

"In the post-Columbia world, they're not taking any chances," he said.

As the spacewalkers returned to the airlock, the rest of the shuttle crew used Discovery's robotic arm and connected boom to inspect a thermal blanket below the commander's window that was ripped during launch, most likely by debris.

Mission Control told the astronauts that there was a "remote" possibility that the blanket might require a fourth spacewalk, and asked for their input.

There is some concern that the blanket — located right beneath the commander's cockpit window — might come off during re-entry and smack into the shuttle, Hill said. The blanket — a quilted fabric covering pillow-like stuffing — was ripped open most likely by launch debris and puffed up with air.

A spacewalk to cut away part of the blanket, if approved, would be on Friday.

Robinson attached a special foot restraint to the space station's 58-foot robotic arm and fellow astronauts aboard the station maneuvered the arm so Robinson could reach the shuttle's belly. They were careful to make sure Robinson's helmet and feet did not contact the fragile ship.

Robinson took only the essential tools for the repair — leaving a tile repair kit just outside the airlock. He also secured his safety tethers between his legs and behind him to keep from accidentally striking the vehicle.

Once under Discovery's belly, Robinson expected to spend about an hour removing or trimming the fillers from two locations near the shuttle's nose. But it took mere seconds for him to pull each strip.

"It was a lot more complicated than it looks," which is a testament to the skill of the crew, said Mark Ferring, STS Lead ISS Flight Director. He said during the spacewalk mission, some robotic snags stopped motion of parts of a robotic platform, showing the necessity of having humans on space missions to solve unforeseen problems.

"Steve, could you move your hand out of the field of view," astronaut Andrew Thomas radioed Robinson, who had a camera attached to his helmet. "We were enjoying the view as much as you were."

NASA thought the first gap filler was the trickier of the two. They believed it remained glued to a shim that was bonded to a thermal tile.

Once the work was complete, Thomas requested the spacewalkers return to the shuttle and cut short the expected 7-hour orbital outing. He said it had been a long day.

Robinson, however, urged Mission Control to let him take a picture from beneath the shuttle before the station's arm brought him back up.

"You guys are going to be happy I had a camera," Robinson said. "It is so beautiful to see the orbiter against the Earth at these angles."