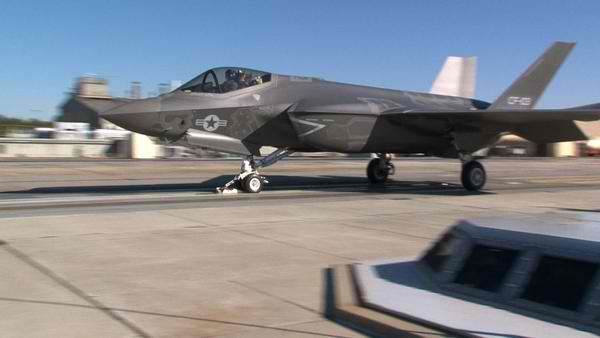 The U.S. Navy said today it has demonstrated the successful integration of two of its key next-generation sea-based strike programs--the carrier version of the Joint Strike Fighter, and the all-new electromagnetic aircraft launch system.

Both the F-35C fighter and the EMALS launch technology are expected to see service eventually aboard the USS Gerald R. Ford, the Navy's , as well as other Ford-class carriers.

The F-35C is the carrier variant of the controversial Joint Strike Fighter, a $1 trillion military program that has been the subject of . Meanwhile, is the program at the heart of the Navy's expected transition away from steam catapults, which it has used aboard its aircraft carriers for more than 50 years.

Earlier this summer, the Navy test-launched the F-35C more than 50 times via steam catapult in a bid "to perform an initial structural survey and [collect] steam ingestion data," the service said in a release today. At the same time, EMALS--a landlocked version built at Joint Base McGuire-Dix-Lakehurst in New Jersey--has been used to test-launch a series of aircraft, including a T-45 Goshawk, a C-2A Greyhound, a number of F/A-18s, and an E-2D Advanced Hawkeye. Now, as of this month, EMALS and the F-35C have finally been tested together.

Eventually, the two will become key pillars of Ford-class (CVN 78) carriers, the first of which is expected to be delivered to the Navy by 2015.

While it has depended on steam-catapults for decades, the Navy has said it needs EMALS' "higher launch energy capacity" if it wants best launch performance for heavier, faster planes like the F-35C. In addition, the Navy hopes that EMALS will be capable of delivering improvements in system weight, maintenance, and efficiency, as well as other advances.

The EMALS program is being developed by Predator drone manufacturer General Atomics. According to a Navy Times article from last year, General Atomics had reached agreement with the Navy on a $676 million fixed-price contract to develop EMALS and other projects for Ford-class carriers.