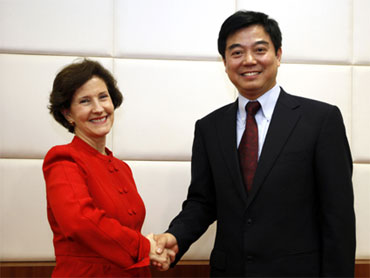 Top U.S. safety officials were meeting with their Chinese counterparts to discuss complaints from American homeowners of illness and other damage from suspect drywall imported from China.

Consumer Products Safety Commission Chairman Inez Tenenbaum said Friday that the two sides were talking about the issue while they await results of tests on what is causing the problems.

"All we're asking is for them to realize that in the global economy everyone has to be responsible to the end user, the consumer. We're asking them to participate in this in ways that are just and fair," Tenenbaum said in an interview with The Associated Press.

American construction companies imported the drywall, also known as wallboard or gypsum board, at the height of the housing boom, when building materials were in short supply. The drywall apparently causes a chemical reaction releasing fumes that reek like rotten eggs and grows worse with heat and humidity.

U.S. homeowners, mostly in the Southeast, say the drywall is making them sick and corroding wiring throughout their homes. Lawmakers from Florida, Louisiana and elsewhere are pressing Tenenbaum for answers about its safety.

The costs to homeowners could be in the billions of dollars, according to some estimates, and homeowners have struggled to get help from insurers or relief from mortgage payments on homes that are in some cases uninhabitable.

Builders have filed lawsuits against suppliers and manufacturers, claiming they unknowingly used the bad building materials. But progress will likely depend on the results of tests on affected homes and materials. Some of those results are due next week, with more due next month.

In the meantime, Tenenbaum, who was in China for annual seminars on product safety and regulations, said CPSC staff were meeting with officials from Beijing's product safety watchdog, the Administration of Quality Supervision Inspection and Quarantine.

"We've been continuing our dialogue with them on what we're finding and keeping them up-to-date on the situation," she said.

The drywall problem is the latest in a slew of product safety troubles that have prompted a tightening of standards and enforcement both in China and overseas.

Tenenbaum said the Chinese side has helped with technical aspects of her agency's investigation.

"They have been most cooperative in that regard," she said.

The CPSC delegation was also updating the Chinese side on U.S. regulations. Among them, the Consumer Product Safety Improvement Act or CPSIA, that took effect in August and imposes heavy fines for violation of rules meant to protect children from lead, which can cause irreversible brain damage.

Friday's talks were mainly devoted to new mandatory safety standards for all-terrain vehicles, which the CPSC says are involved in 900 deaths and more than 150,000 injuries every year in the U.S., many of them children.

Tenenbaum, who took over the CPSC in June, said she expected the U.S. to end up with mandatory standards for drywall, in line with the shift toward such requirements for toys and some other products.

"In a global economy, with goods coming from all over the world, it's important that we have clear standards that we can enforce on imports," she said.

The CPSC, headquartered in Bethesda, Md., has about 500 employees and oversees about 15,000 products.