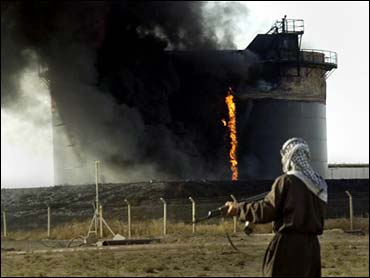 U.S. and Iraqi troops stormed insurgent-held police stations and neighborhoods Tuesday, launching an offensive to retake parts of the northern Iraqi city of Mosul, where gunmen staged a mass uprising last week in support of fighters in Fallujah.

Troops secured several police stations by the mid-afternoon, meeting "very little resistance," the U.S. military said. Witnesses said insurgents blew up three stations they were holding before abandoning them ahead of the U.S. assault.

U.S. warplanes and helicopters hovered over Mosul — Iraq's third largest city, with about 1 million residents — as loud explosions and gunfire were heard. About 1,200 U.S. soldiers were taking part in the offensive to recapture about a dozen police stations abandoned by Iraqi forces in the uprising.