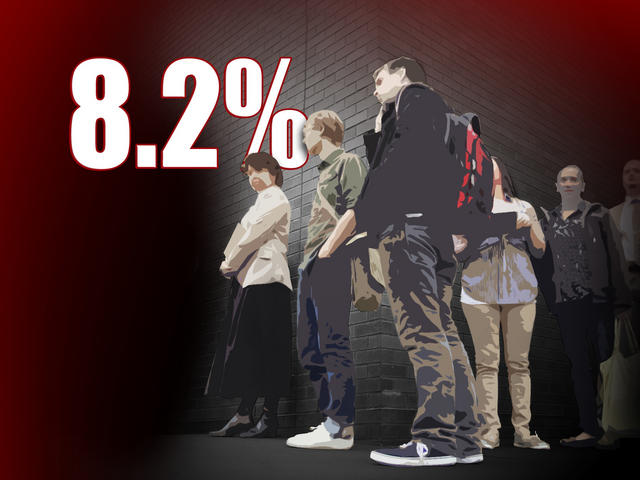 (CBS/AP) - Job openings at U.S. employers rose to 3.64 million in May, up from 3.44 million the previous month, with new positions increasing in manufacturing and state and local government, according to federal data out Tuesday.

Openings were up 18 percent over the year-ago period, with private openings up 17 percent to 3.25 million and government slots rising to 395,000, from 303,000, the U.S. Labor Department reported. Total nonfarm job openings in May was up from 2.4 million at the end of the recession in June 2009.

May's total is the second highest for the year. A rise in openings could mean hiring will pick up in the coming months. It typically takes one to three months to fill a job.

Yet, layoffs also increased, an indication that the job market is still struggling. U.S. employers added only 80,000 jobs in June, a third straight month of weak hiring that shows the economy is struggling. The unemployment rate remained unchanged at 8.2 percent.

Even with the increase, the competition for jobs remains fierce. There were 12.7 million unemployed people in May, or an average of 3.5 unemployed people for each open job. In a healthy job market, the ratio is usually around 2 to 1.

The economy added just 75,000 jobs a month in the April-June quarter. That's one-third of 226,000 a month created in the first quarter. Job creation is also trailing last year's pace through the first six months of 2012.

Wages for those who have jobs also are barely keeping up with inflation. Without more jobs and higher pay, consumers won't have the income needed to fuel more spending and economic growth.

The slow pace of hiring also suggests businesses aren't confident enough in the economy to add permanent employees. Nearly a third of the jobs added last month were temporary hires. That is usually seen as a good sign, because it indicates employers need more workers and will soon hire permanently. But many economists now say it suggests that companies are simply reluctant to add workers for the long term.

Overall, the economy isn't growing fast enough to generate many more jobs. The economy expanded at a 1.9 percent annual rate in the first three months of the year, down from a 3 percent pace in the final three months of last year. Growth likely didn't pick up much in the April-June quarter, economists say.

Weak job-creation in the U.S. has roiled financials markets at home and abroad, with investors pulling back amid signs that the global economy is slowing down.

Stocks opened higher Tuesday after European leaders accelerated a plan to shore up Spain's troubled banks. The Dow Jones industrial average rose 77 points to 12,814 shortly after the start of trading. The Standard & Poor's 500 rose 8 points to 1,360. The Nasdaq rose 18 points to 2,950.

European finance ministers agreed early Tuesday on the terms of a bailout for Spain, saying that the first $37 billion in aid can be ready by the end of the month. Unemployment in Spain is nearing 25 percent.