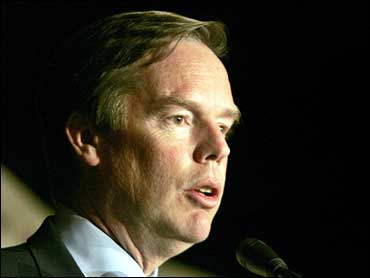 The United States has "irrefutable" evidence that Iran is transferring weapons to the Taliban in Afghanistan, with the knowledge of the Iranian government, and NATO has intercepted some of the shipments, a senior U.S. diplomat said Wednesday.

Speaking separately to The Associated Press, Burns also said that NATO needs to act to stop the shipments. The Iran-Afghanistan frontier is "a very long border. But the Iranians need to know that we are there and that we're going to oppose this."

"It's a very serious question," he said, adding that Iran is in "outright violation" of relevant U.N. Security Council resolutions.

Burns' claims of evidence Tuesday came after he first accused Iran of supplying the Taliban the day before. Speaking to reporters in Paris, he said Iran was funding insurrections across the Middle East.

"It's a country that's trying to flex its muscles, but in a way that's injurious to the interests of just about everybody else in the world," he said. "I think it's a major miscalculation."

Burns also criticized Iran's perceived intransigence over its nuclear program, which many Western powers fear masks a plan to build weapons, though Iran says its intentions are to generate energy.

Speaking to a crowd of several thousand supporters in the city of Semnan, 150 miles southeast of Tehran during a two-day provincial trip, the Iranian leader stuck to his belligerent rhetoric.

"This nation will punch its intimidators in the mouth," said Ahmadinejad, in a reference to U.S.-led group of Western nations that have chastised Iran over its uranium enrichment. His speech was broadcast live on state television.

"You — the West — have to know that your resolutions will not be worth a red cent for the Iranian nation," added Ahmadinejad.

The U.N. Security Council is preparing to debate a third set of sanctions against the Islamic republic in response to Tehran's continuing refusal to suspend the enrichment, which can produce fuel for civilian energy or fissile material for a bomb.

Referring to two previous rounds of sanctions imposed by the Security Council, Ahmadinejad said they had no negative impact on his country and reiterated that Iran would not give up its right to pursue peaceful nuclear technology under any circumstance.

Last week, U.S. Defense Secretary Robert Gates said in Afghanistan that Iranian weapons were falling into the hands of Taliban fighters, but stopped short of blaming the government itself.

Iran's possible role in aiding insurgents in Iraq has long been hotly debated, and last month some Western and Persian Gulf governments charged that the Islamic government in Tehran is also secretly bolstering Taliban fighters.

"In Afghanistan it is clear that the Taliban is receiving support, including arms from ... elements of the Iranian regime," British Prime Minister Tony Blair wrote in the May 31 edition of the Economist.

Iran, which is also in a dispute with the West over its nuclear program, denies the Taliban accusation, calling it part of a broad anti-Iranian campaign. Tehran says it makes no sense that a Shiite-led government like itself would help the fundamentalist Sunni movement of the Taliban.