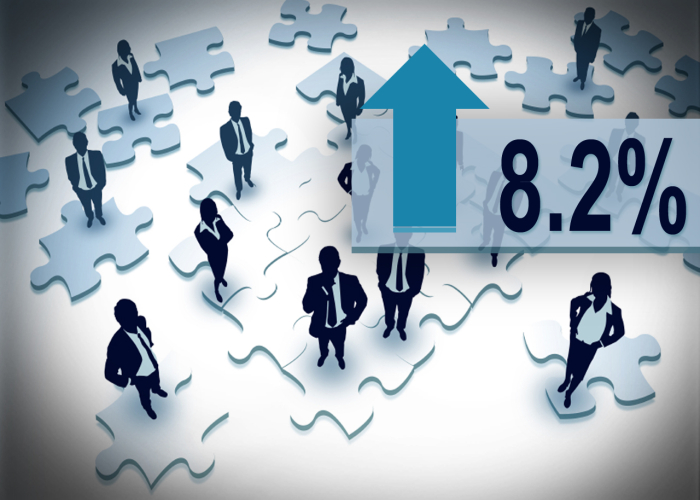 (AP) WASHINGTON - Hiring likely picked up slightly in June after sputtering in April and May. But the gains aren't expected to be enough to lower the unemployment rate.

Analysts forecast that the economy gained only 90,000 jobs last month, according to a survey by FactSet. It would mark a third straight month of weak job growth. The unemployment rate is expected to remain at 8.2 percent.

The Labor Department will report on June hiring and unemployment at 8:30 a.m. Eastern time Friday.

Some economists grew more optimistic on Thursday after a pair of reports signaled improvement in the job market last month. The government said fewer people applied for unemployment benefits for the second straight week. And payroll provider ADP said businesses added 176,000 jobs last month, up from its reported gain of 136,000 jobs in May.

Goldman Sachs responded to the better data by raising its forecast to a gain of 125,000 jobs last month, up from its initial prediction of 75,000.

Still, the economy and the job market remain lackluster. Even a gain of 125,000 jobs is only enough, over time, to keep up with population growth and prevent the unemployment rate from rising.

In April and May, employers added an average of just 73,000 jobs. That was far fewer than the 226,000 a month added in the first three months of the year. And it's far too low to reduce the unemployment rate.

Another weak month of hiring could benefit Mitt Romney, the presumptive GOP presidential nominee. President Barack Obama is expected to face voters with the highest unemployment rate of any president since the Great Depression, and the economy is the top issue for many voters.

Dismal June job figures could also prompt the Federal Reserve to take further action to try to boost the economy. The Fed last month downgraded its economic outlook for 2012. It predicted growth of just 1.9 percent to 2.4 percent for the year and little change in the unemployment rate.

Despite the gloom, American factories and service firms kept hiring in June, according to surveys by the Institute for Supply Management. Economists say that suggests many companies don't think the slowdown in hiring this spring will endure.

"It is beginning to look like the labor market is not nearly as weak as feared," Joel Naroff, chief economist at Naroff Economic Advisors, said in a note to clients.

Hiring is crucial to consumers, who are losing confidence in the economy and whose pay is scarcely rising. They have pulled back on spending in the past two months, even though gas prices have fallen roughly 60 cents a gallon, on average, since early April. Consumer spending drives about 70 percent of the economic activity.

And Europe's debt crisis threatened to hold back U.S. growth further. Exports to Europe have fallen in recent months, hurting U.S. manufacturing, a key source of growth since the recession officially ended three years ago. In June, manufacturing shrank for the first time in nearly three years, according to ISM.

The European Central Bank cut its key interest rate by a quarter-point to a record low 0.75 percent Thursday in an effort to boost Europe's flagging economy. The central bank also cut the rate it pays to commercial banks on overnight deposits to zero. That is intended to push banks to lend more rather than hold reserves at the ECB.

In addition, Mario Draghi, president of the ECB, said the economy in the 17 nations that use the euro would recover only gradually and the risks "continue to be on the downside." He also suggested the interest rate cut would only have a limited impact on the economy.