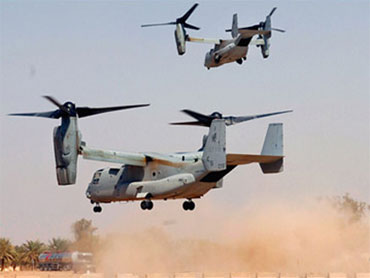 A spokesman for the Taliban said its fighters had shot it down, but an Afghan official said it appeared to have crashed due to mechanical failure.

Air Force officials said the cause of the crash was still being investigated.

The CV-22 Osprey uses tilt-rotor design allows it to take off as a helicopter but fly more like a propeller airplane once airborne, making it faster than most other military helicopters. According to the Air Force, the craft generally "conducts long range infiltration and resupply for U.S. Forces."

A NATO spokesman said only that the helicopter went down overnight in the southeastern province of Zabul, and that no other details were known about the incident, which was under investigation.

The U.S. military said casualties had been transported to a nearby military base for treatment. The military's statement indicated that all U.S. personnel had been accounted for.

The helicopter crash came just two days after the Taliban posted video of a man identified as Pfc. Bowe Bergdahl, an American soldier captured in Afghanistan last June. It shows him pleading to be returned home and saying the war in Afghanistan is not worth the human cost.

NATO commanders in Afghanistan said Thursday the release of the video showing Bergdahl only inspires further efforts to find the man.

Rasuliyar said the crash site was about 7 miles from the provincial capital of Qalat, further away than originally reported. He said there were reports of four deaths among those aboard the chopper, the type of which he did not know.

Qari Yusuf Ahmedi, a spokesman for the Taliban insurgency that is active in the area, said militants had shot down the aircraft around midnight. The report could not be independently confirmed and the insurgents have a history of false and exaggerated claims designed to promote their cause of driving foreign forces from the country.

Choppers are used extensively by both NATO and the Afghan government forces to transport and supply troops spread out across a mountainous country with few roads. Losses have been relatively light, despite insurgent fire and difficult conditions and most crashes have been accidents caused by maintenance problems or factors such as dust.

Lacking shoulder-fired missiles and other anti-aircraft weapons, the Taliban rely mainly on machine guns and rocket propelled grenades to target helicopters at their most vulnerable during landings and takeoffs.

One of the heaviest single-day losses of life for allied forces occurred on June 28, 2005, when 16 U.S. troops died aboard a Special Forces MH-47 Chinook helicopter that was shot down by insurgents.