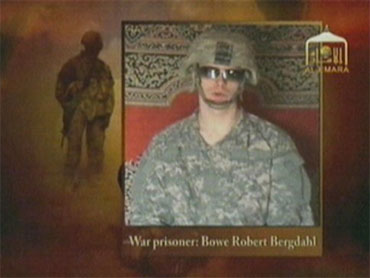 The Taliban have released a video of a man identified as an American soldier captured in Afghanistan last June, showing him pleading for his release and return home.

In the video, Pfc. Bowe Bergdahl says he wants to go home and says the war in Afghanistan is not worth the number of lives that have been lost or wasted in prison.

The seven-minute video of Bergdahl shows him sporting a beard and doing a few push-ups to demonstrate he's in good physical condition. There was no way to verify when the footage was taken. Pentagon officials could not immediately be reached for comment.

The Taliban last released a video of Bergdahl on Christmas Day. He is the known American serviceman in captivity overseas. The U.S. airborne infantryman was taken by the Afghan Taliban in Paktika province on June 30, 2009.

Bergdahl's family has released statements pleading for his release and urging him to "stay strong."

The Geneva Conventions, which regulate the conduct of war between regular armies, bar the use of detainees for propaganda purposes and prohibit signatories from putting captured military personnel on display. As an insurgent organization, the Taliban are not party to the treaty.

Bergdahl, who was serving with a unit based in Fort Richardson, Alaska, was 23 when he vanished just five months after arriving in Afghanistan. He was serving at a base in Paktika province near the border with Pakistan in an area known to be a Taliban stronghold. On Friday, NATO said a joint Afghan-international force killed several militants in Paktika while searching for a commander of the Jalaluddin Haqqani militant network that is linked to al Qaeda.

U.S. military officials have searched for Bergdahl, but it is not publicly known whether he is even being held in Afghanistan or neighboring Pakistan.