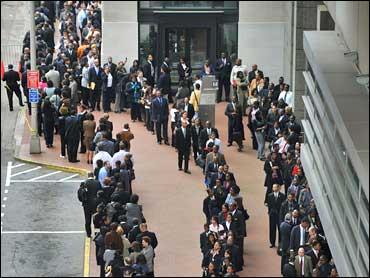 It wasn't the Great Depression. It was the 1981-82 recession, widely considered America's worst since the depression.

That painful time during Ronald Reagan's presidency is a grim marker of how bad things can get. Yet the current recession could slice deeper into the U.S. economy.

Billionaire U.S. investor added to the gloom, saying of the economy, "It's fallen off a cliff." He added, "Not only has the economy slowed down a lot, but people have really changed their habits like I haven't seen."

Buffett predicted that unemployment will likely climb a lot higher before the recession is done, but he also reiterated his optimistic long-term view: "Everything will be all right. We do have the greatest economic machine that's ever been created."

Unemployment hasn't reached 1982 levels and the gross domestic product hasn't fallen quite as far. But the hurt from this recession is spread more widely and uncertainty about the country's economic health is worse today than it was in 1982.

Back then, if someone asked if the nation was about to experience something as bad as the Great Depression, the answer was, "Quite clearly, `No,"' said Murray Weidenbaum, chairman of the Council of Economic Advisers in the Reagan White House.

"You don't have that certainty today," he said. "It's not only that the downturn is sharp and widespread, but a lot of people worry that it's going to be a long-lasting, substantial downturn."

For months, headlines have compared this recession with the one that began in July 1981 and ended in November 1982.

Older Americans scammed out of $1.7 billion in 2021, FBI says
Thanks for reading CBS NEWS.
Create your free account or log in
for more features.
View CBS News In
CBS News App Open
Chrome Safari Continue
Be the first to know
Get browser notifications for breaking news, live events, and exclusive reporting.