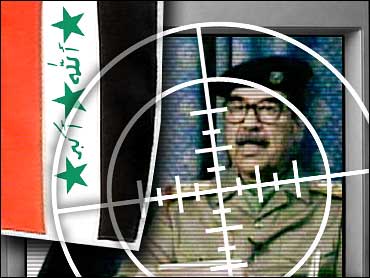 The U.S. Air Force has hit Iraqi TV with an experimental electronmagetic pulse device called the "E-Bomb" in an attempt to knock it off the air and shut down Saddam Hussein's propaganda machine, CBS News Correspondent David Martin reports.

Iraqi satellite TV, which broadcasts 24 hours a day outside Iraq, went off the air around 4:30 a.m. local time (8:30 p.m. ET Tuesday). Iraq's domestic television service was not broadcasting at the time.

Officially, the Pentagon does not acknowledge the weapon's existence. Asked about it at a March 5 news conference at the Pentagon, Gen. Tommy Franks said: "I can't talk to you about that because I don't know anything about it."

The use of the secret weapon came on a day that saw intense action on the battlefield. The Pentagon said the U.S. Seventh Cavalry killed between 150 and 500 Iraqis after being attacked by rocket-propelled grenades near An Najaf in central Iraq. There are no reported American casualties.

In other major developments: