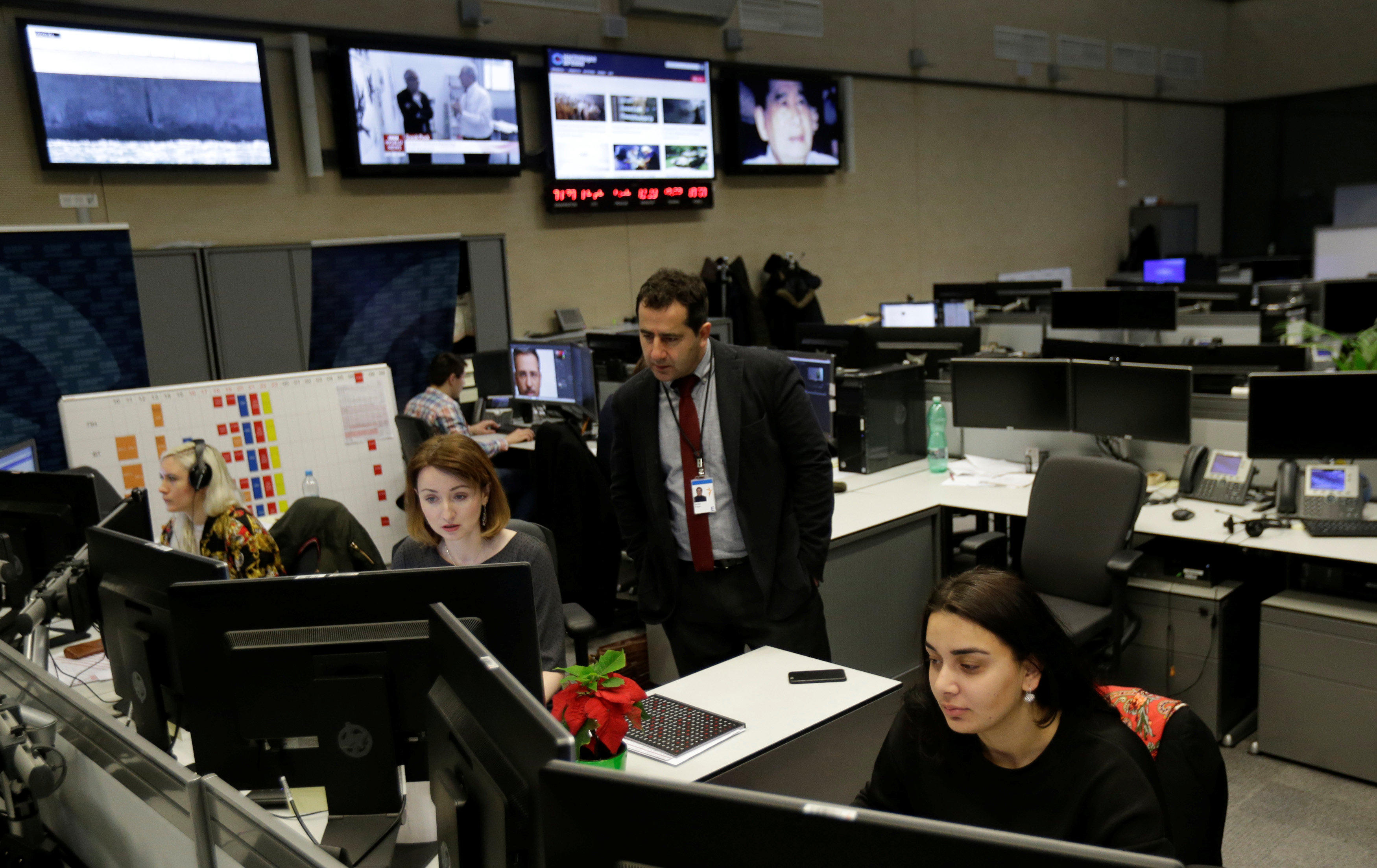 Current Time, run by Prague-based Radio Free Europe/Radio Liberty with help from Washington-based Voice of America, is targeting Russian speakers across the globe with round-the-clock programming intended to offer the type of fact-based news that its leaders say is sorely missing in the Russian market. The network formally launched this week after quietly starting operations last year.

“In a complicated world, it can be difficult to tell what’s real. But Current Time tells it like it is,” a narrator says in a flashy promotional video for the network. “Current Time serves as a reality check, with no ‘fake news’ or spin.”

The network, beamed into Europe via cable, satellite and online, reflects an American attempt to diminish the dominance of what the U.S. government has long warned is a growing Russian propaganda machine, epitomized by state-run outlets like Sputnik and RT, formerly known as Russia Today. The U.S. and others have raised concerns that such outlets distort Russians’ perceptions about their government while drowning out the limited sources of independent news available to Russian audiences.

The U.S. intelligence report on Russian hacking called RT part of “a Kremlin-directed campaign to undermine faith in the U.S. Government and fuel political protest.”

“In your own words: ‘The U.S. lacks democracy and has no right to teach the world.’ What was that all about?” Palmer asked her.

“The U.S. has made a lot of mistakes all over the world. Look at Iraq,” Simonyan said. “The country that makes such mistakes do not have the moral right to teach the world.”

Alexey Kovalev used to work for Russia’s state news service, but is now with the independent paper the Moscow Times. He told Palmer the Kremlin’s goal is clear:

“To bring down the West to same level as Russia, and to show that your institutions are as sham as ours and your press isn’t free,” Kovalev said. “Your politicians are all liars and crooks like ours are.”

If the propaganda works, said Palmer, Russians, especially young Russians, will lose their faith in democracy and stop agitating for political change, and young Americans will lose faith in their country and its institutions media, too.

The Russian Embassy in Washington did not respond to a request for comment on the launch of Current Time.

Current Time’s executives say that despite the network origins within a wing of the U.S. government, offering balanced, accurate information is a far different mission than what Kremlin-run news outlets seek to do.

“This is not designed as propaganda or counter-propaganda,” said Tom Kent, president of Radio Free Europe/Radio Liberty. “We do not intend to be involved in reacting to an agenda set by anyone, in Russia or elsewhere.”

Still, the undertaking unavoidably plays into the roiling debate in the U.S. about President Donald Trump’s flirtations with a more conciliatory approach to Russia. Trump has emphasized the advantages of a more cooperative U.S.-Russia relationship while leaving open the possibility the U.S. could roll back penalties imposed on Russia for its actions in Ukraine.

Current Time, on the other hand, broadcasts a weekly show called “Crimea Realities” and another called “Donbass Realities.” The Obama administration’s sanctions were enacted after Russia annexed Crimea from Ukraine, and the Donbass region of eastern Ukraine remains at the heart of the conflict between Kiev and Russia-backed rebels.

Roughly six hours per day are live news broadcasts, including an hour-long show broadcast from Washington and another from Prague. The network’s leaders said showing news events such as the U.S. inauguration live, rather than on tape delay, had proven a particularly effective way to assure audiences that what they are watching is truthful and undistorted.

The two outlets behind Current Time, RFE/RL and VOA, are U.S.-funded broadcasters whose mission is to support free speech and democracy around the world. They broadcast in dozens of languages but have their roots in Cold War efforts by the U.S. to present alternative viewpoints to audiences in the Soviet Union and its satellite states.

Both RFE/RL and VOA have long had Russian-language programming targeting viewers in specific countries, but Current Time marks a new attempt to market broadly to Russian speakers wherever they live.

In much of Europe - including former Soviet states with large Russian-speaking populations - Current Time has negotiated contracts with local cable providers that allow viewers to tune in from their home TVs. In Russia, distribution is more difficult, forcing perspective viewers to watch via satellite, web-TV apps or a live-feed on the network’s website.

Meet the people pulling out landmines so Ukrainians can go home