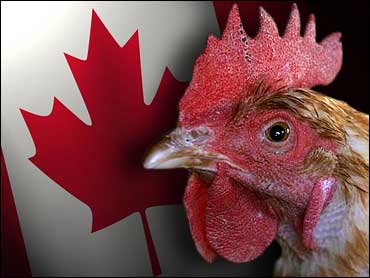 The United States banned poultry from mainland British Columbia because of bird flu, but Canadian officials say the virus is not the virulent strain in Southeast Asia that has been blamed for more than 60 human deaths.

The interim ban was announced Monday by the U.S. Department of Agriculture.

Canada's chief veterinary officer Dr. Brian Evans said he received a letter from American officials saying they are restricting imports of poultry products from the British Columbia mainland until they get a full assessment of the situation in the three-mile area around the farm affected by avian flu.

The Canadian Food Inspection Agency said the strain of bird flu infecting a duck at a farm in Chilliwack, just outside of Vancouver, is different from the virulent outbreak among birds in Asia. Nevertheless, they have started killing about 56,000 birds on the farm with carbon dioxide gas as a precaution.

The H5 virus found at the farm is a low pathogenic North American strain, unlike the deadly H5N1 strain in Asia. Federal officials have assured Canadians that the strain of the flu found in British Columbia poses no threat to human health.

U.S. Agriculture Department spokesman Jim Rogers said U.S. officials are "waiting to get more information from Canada, at which point we could be able to scale back."

"There is a growing threat to human health," Yin Chengjie, a deputy Chinese agriculture minister, said at a news conference.

A Taiwanese research firm said it succeeded in making a key ingredient for the scarce antiviral drug Tamiflu — a possible step toward mass-producing a generic version. Indonesia was awaiting test results on a man who died in Jakarta.

China's latest outbreaks were its 16th and 17th in poultry in recent weeks and came despite a nationwide effort to vaccinate billions of poultry against the virulent H5N1 strain of the virus.

Yin, the Chinese official, warned that the disease's virulence, or its ability to cause illness, appeared to be increasing. He pointed to rising numbers of cases in ducks and geese, while earlier outbreaks were limited to chickens.

Yin and other officials announced new rules requiring local Chinese officials to set up disease-warning networks and to stockpile disinfectant and other emergency supplies. Officials who fail to pinpoint and report outbreaks quickly face firing or jail.

The latest Chinese outbreaks in the northern region of Inner Mongolia and the central province of Hubei killed a total of 3,676 chickens, ducks and geese, the official Xinhua News Agency said. It said authorities destroyed a total of 7,002 birds to contain the outbreaks.

China has reported one human fatality, plus the death of a girl who was a suspected case.

Jia Youling, the Agriculture Ministry's chief veterinary officer, said China is 60 percent of the way through a plan to vaccinate 5.2 billion chickens, geese and ducks — a figure that represents the total number of poultry in the country at any one time.

"It's a very challenging task," Jia said at the news conference.

In Romania, authorities will destroy 2,000 poultry in the village of Caraorman along the Danube River after tests confirmed that four hens there had the H5N1 flu strain, said Agriculture Minister Gheorghe Flutur.

Elsewhere in Europe, birds have tested positive for H5N1 in Russia, Croatia and Turkey.

In North Korea, a customs official said the isolated country has banned poultry imports from countries with bird flu and is scrutinizing arriving travelers and goods.

"We're quarantining people who are suspected of even a small thing," said the official, Kim Hyong Chol, quoted by the official Korean Central News agency.

North Korea suffered a bird flu outbreak in February that prompted it to destroy 210,000 chickens and other poultry.

In Indonesia, authorities were waiting for confirmation from a World Health Organization-authorized lab in Hong Kong after preliminary tests on the 35-year-old man who died in Jakarta were positive for bird flu, said Health Ministry official I Nyoman Kandun.

Throughout Asia, the H5N1 strain of bird flu has killed at least 67 people since 2003. Almost all of them came into close contact with infected birds.

Experts fear that the H5N1 virus could mutate into a form that can easily be passed from human to human, sparking a pandemic.

The WHO has recommended that governments stockpile Tamiflu, one of the only drugs believed to be effective against bird flu. But its Swiss maker, Roche Holding AG, says high demand and the lengthy period needed for production have led to shortages.

Taiwan has been negotiating with Roche for a possible license to make generic Tamiflu for a possible bird flu outbreak. Roche's supplies of shikimic acid come from China.

Taiwanese Premier Frank Hsieh said last month that production of Tamiflu for 2.3 million people — 10 percent of the island's population — could begin in December and take about one month.