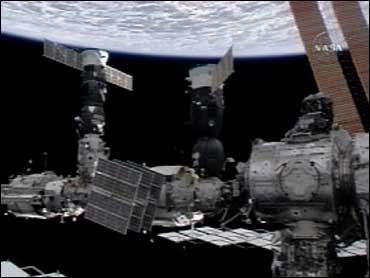 
In an unprecedented space collision, a commercial Iridium communications satellite and a defunct Russian satellite ran into each other Tuesday above northern Siberia, creating a cloud of wreckage, officials said today. The international space station does not appear to be threatened by the debris, they said, but it's not yet clear whether it poses a risk to any other military or civilian satellites.

"They collided at an altitude of 790 kilometers (491 miles) over northern Siberia Tuesday about noon Washington time," said Nicholas Johnson, NASA's chief scientist for orbital debris at the Johnson Space Center in Houston. "The U.S. space surveillance network detected a large number of debris from both objects."

Air Force Brig. Gen. Michael Carey, deputy director of global operations with U.S. Strategic Command, the agency responsible for space surveillance, said initial radar tracking detected some 600 pieces of debris. He identified the Russian spacecraft as Cosmos 2251, a communications relay station launched in June 1993, and said the satellite is believed to have been non-operational for the past 10 years or so.

"As of about 12 hours ago, I think the head count was up (to around) 600 pieces," Carey told CBS News late today. "It's going to take about two days before we get a solid picture of what the debris fields look like. But you, I think, can imply that the majority of that should be probably along the same line as the original orbits."

He said U.S. STRATCOM routinely tracks about 18,000 objects in space, including satellites and debris, that are 3.9 inches across or larger. Tracking priority and "conjunction analysis" - identifying which objects may pose a threat to manned spacecraft - is the first priority.

"It's going to take a while" to get an accurate count of the debris fragments, Johnson said. "It's very, very difficult to discriminate all those objects when they're really close together. And so, over the next couple of days, we'll have a much better understanding."

Iridium Satellite LLC operates a constellation of some 66 satellites, along with orbital spares, to support satellite telephone operations around the world. The spacecraft, which weigh about 1,485 pounds when fully fueled, are in orbits tilted 86.4 degrees to the equator at an altitude of about 485 miles. Ninety-five Iridium satellites were launched between 1997 and 2002 and several have failed over the years.

"Yesterday, Iridium Satellite LLC lost an operational satellite," the company said in a statement. "According to information shared with the company by various U.S. government organizations that monitor satellites and other space objects (such as debris), it appears that the satellite loss is the result of a collision with a non-operational Russian satellite.

"Although this event has minimal impact on Iridium's service, the company is taking immediate action to address the loss. The Iridium constellation is healthy, and this event is not the result of a failure on the part of Iridium or its technology. While this is an extremely unusual, very low-probability event, the Iridium constellation is uniquely designed to withstand such an event, and the company is taking the necessary steps to replace the lost satellite with one of its in-orbit spare satellites."

Johnson said the collision was unprecedented.

"Nothing to this extent (has happened before)," he said. "We've had three other accidental collisions between what we call catalog objects, but they were all much smaller than this and always a moderate sized objects and a very small object. And these are two relatively big objects. So this is a first, unfortunately."

As for the threat posed by the debris, Johnson said NASA carried out an immediate analysis to determine whether the space station faced any increased risk. The station, carrying three crew members, circles the globe at an altitude of about 220 miles in an orbit tilted 51.6 degrees to the equator.

"There are two issues: the immediate threat and a longer-term threat," he said. "It turns out, when you have a collision like this the debris is thrown very energetically both to higher orbits and to lower orbits. So there are actually debris from this event which we believe are going through the space station's altitude already. Most of it is not, most of it is still clustered up where the event took place. But a small number are going through station's altitude.

"Yesterday, we did an assessment of what the risk might be to station and we found it's going to be very, very small. As time goes on, those debris will (come down) some over months, most over years and decades and as the big ones come down they'll be tracked, we'll see them and the worst-case scenario, we'll just dodge them if we have to. It's the small things you can't see are the ones that can do you harm."

Asked if other satellites might be at risk, Johnson said "technically, yes. What we're doing now is trying to quantify that risk. That's a work in progress. It's only been 24 hours. We put first things first, which is station and preparing for the next shuttle mission."

Most, if not all, of the debris is expected to eventually burn up in Earth's atmosphere.