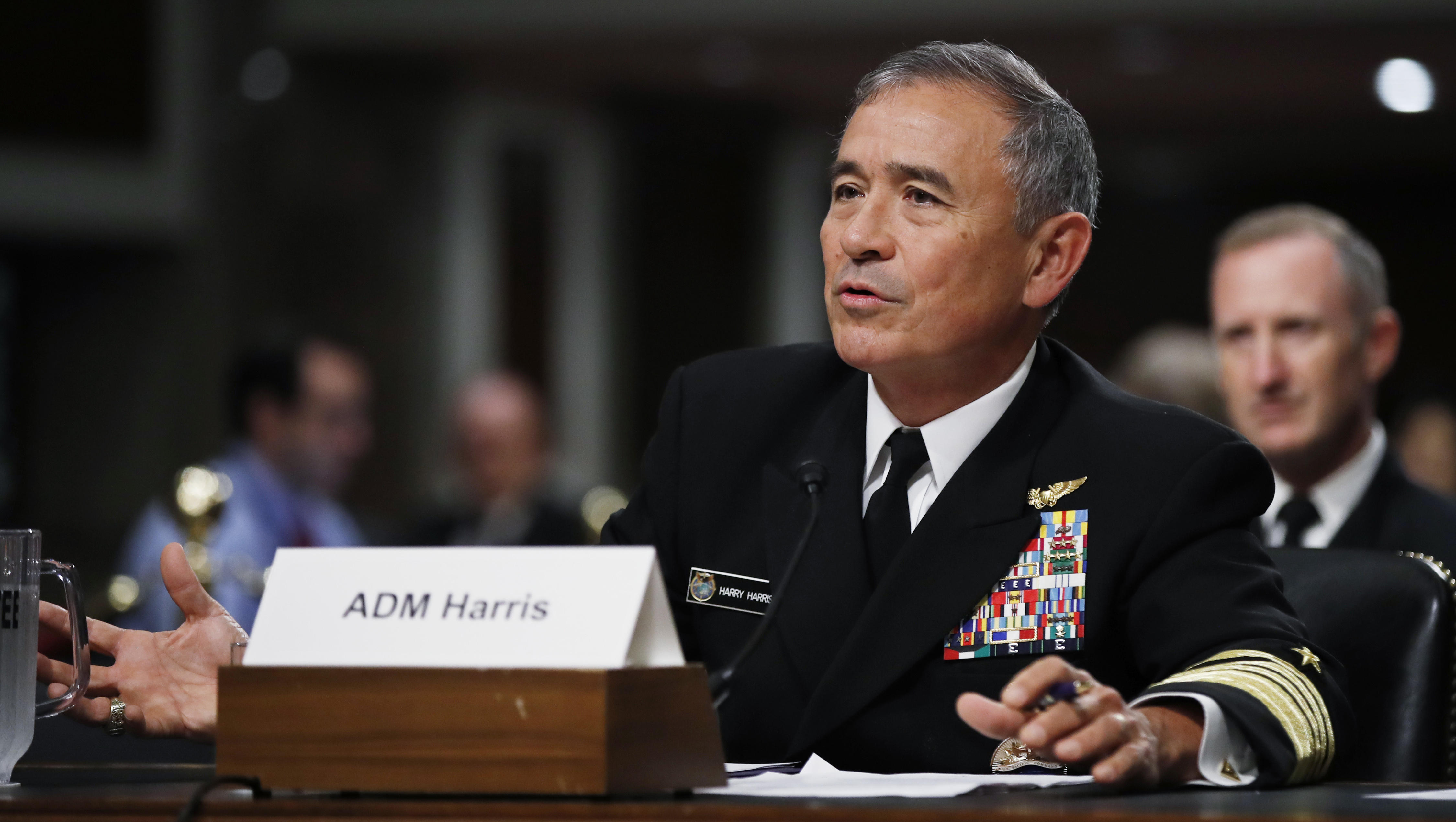 WASHINGTON -- The senior U.S. Navy officer overseeing military operations in the Pacific said Thursday that the crisis with North Korea is at the worst point he's ever seen, but he declined to compare the situation to the Cuban missile crisis decades ago.

Harris said he has no doubt that North Korean leader Kim Jong Un intends to fulfill his pursuit of a nuclear-tipped missile capable of striking the United States. The admiral acknowledged there's uncertainty within U.S. intelligence agencies over how far along North Korea's nuclear and missile programs are. But Harris said it's not a matter of if but when.

"There is no doubt in my mind," Harris said.

The Trump administration has declared that all options, including a targeted military strike, are on the table to block North Korea from carrying out threats against the United States and its allies in the region. But a pre-emptive attack isn't likely, U.S. officials have said, and the administration is pursuing a strategy of putting pressure on Pyongyang with assistance from China, North Korea's main trading partner and the country's economic lifeline.

Sen. John McCain of Arizona, the Republican chairman of the Armed Services Committee, said on "CBS This Morning" Thursday that any strike to North Korean aggression would "absolutely be the last option."

"That is when we are convinced that North Korea has that capability to launch a missile that could strike with a nuclear weapon the West Coast of the United States," McCain said.

With international support, the Trump administration said Thursday it wants to exert a "burst" of economic and diplomatic pressure on North Korea that yields results within months to push the communist government to change course from developing nuclear weapons.

Susan Thornton, the acting top U.S. diplomat for East Asia, said there's debate about whether Pyongyang is willing to give up its weapons programs. She said the U.S. wants "to test that hypothesis to the maximum extent we can" for a peaceful resolution.

But signaling that military action remains possible, Thornton told an event hosted by the Foundation for Defense of Democracies -- a Washington think tank that has advocated tougher U.S. policies on Iran and North Korea -- that the administration treats North Korea as its primary security challenge and is serious that "all options are on the table."

"We are not seeking regime change and our preference is to resolve this problem peacefully," Thornton said, "but we are not leaving anything off the table."

After weeks of unusually blunt military threats, President Trump's national security team briefed lawmakers Wednesday on North Korea's advancing nuclear capabilities that served to tamp down talk of military action amid alarm over Pyongyang's atomic and missile testing. A joint statement from the agency heads made no specific mention of military options, though it said the U.S. would defend itself and friends.

Harris told the committee that the financial sanctions imposed against the North Korean regime by the U.S. and other countries have done nothing to slow North Korea's quest for weapons of mass destruction. He also said he's been skeptical of China's willingness to exert its influence over North Korea and convince Pyongyang to pull back from the brink. But Harris said he's become "cautiously optimistic" following recent talks between Mr. Trump and Chinese President Xi Jinping.

Harris said North Korea's pursuit of an atomic arsenal and the long-range missiles to deliver nuclear weapons comes at the expense of the North Korean people, who are isolated and forced to live with a lifeless economy.

"In confronting the North Korean threat, it is critical that the U.S. be guided by a strong sense of resolve both publicly and privately in order to bring Kim Jong Un to his senses, not his knees," Harris said.

Despite the depravity, Harris said it's a "hollow hope" to think that North Koreans will rise up and topple Kim. Harris said Kim is revered and considered a "god king" by many North Koreans.

In a show of military might, the U.S. has sent a massive amount of American weaponry to the region. A group of American war ships led by the aircraft carrier USS Carl Vinson is in striking range of North Korea "if the president were to call on it," Harris told the committee. A U.S. missile defense system called Terminal High-Altitude Area Defense is being installed in South Korea.

Harris said he has adequate forces to "fight tonight" against North Korea if that were to become necessary. But the admiral also said he lacks all the attack submarines he needs and has no capable defense against the thousands of artillery pieces North Korea has assembled near the Demilitarized Zone separating North and South Korea. There are about 28,500 U.S. military personnel serving in South Korea.

"We do not have those kinds of weapons that can counter those rockets once they're launched," Harris said in response to a question from McCain.