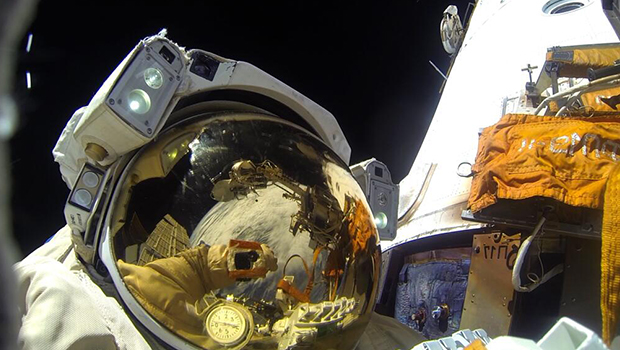 Cosmonauts Oleg Kotov and Sergey Ryazanskiy re-installed two commercial cameras on the hull of the International Space Station Monday during a six-hour eight-minute spacewalk. Despite space-to-ground conversations indicating one of the cameras was unable to communicate properly, officials with Vancouver-based UrtheCast said late Monday they were pleased with the results.

"We wanted to get telemetry that confirmed power, thermal controls, and that we could command the MRC (medium-resolution camera)," Scott Larson, chief executive officer of UrtheCast, told CBS News in an email exchange. "All of those have ranges of telemetry, but at the end of the day, we were happy with the results, recognize more work to do, and are viewing this as a good first day.

"I suspect there might have been differing opinions on what telemetry was expected, but we are viewing this as a success, hopefully with more to come."

UrtheCast plans to use the cameras in a commercial venture with Roscosmos, the Russian federal space agency, to beam down high-definition Earth views to Internet subscribers around the world.

Monday's spacewalk was ordered after telemetry problems during a December excursion prompted the cosmonauts to haul the cameras back inside the station for troubleshooting. This time around, they had no problems installing an ultra-high-definition video camera on a steerable aiming platform and Russian flight controllers confirmed good telemetry.

But telemetry from a second medium-resolution still camera initially appeared intermittent at best.

Ryazanskiy unplugged and re-connected a series of cables in a bid to establish a solid telemetry link, but the cosmonauts eventually were told to collect their tools and return to the Pirs airlock module. The hatch was closed at 3:08 p.m. EST, officially ending the year's first spacewalk.

"Well, at least one of them is working, and that's a big deal," one of the spacewalkers radioed, referring to the high-definition video camera.

But Larson said late Monday both cameras had been successfully installed.

"The cameras were installed perfectly, we received the telemetry we needed to confirm all connections to all cables were good, the camera thermal behavior was as expected, and we were able to confirm that the camera responded to our commands," Larson wrote in an email.

"However, there is lots of work to be done as we move into the commissioning phase, and I don't think anyone expected that we'd be live streaming from either camera within the first few hours of them being installed."

Commissioning the cameras will take "several months," he said, "but we are through the first step, and from here on out we expect everything to be software related."

In a conversation with The Canadian Press, Larson described the initial telemetry problem as a minor connection issue, adding "I don't think anyone here is too worried about it. This is kind of what happens."

During a Dec. 27 spacewalk, internal and external cabling problems prevented telemetry from either camera from making it to the ground. Both cameras were hauled back inside the space station and post-spacewalk troubleshooting seemed to identify two separate issues.

The cosmonauts reconfigured internal cabling to correct the problem with the high-resolution camera. As for the medium-resolution camera, engineers concluded the problem was the result of cables that apparently were not connected to the proper plugs in a so-called "patch panel" in the hull of the Zvezda command module.

During Monday's spacewalk, Kotov and Ryazanskiy had no problems attaching the high-resolution camera to a steerable aiming platform and making the required electrical connections. Flight controllers quickly confirmed they were receiving steady telemetry.

The cosmonauts then re-installed the medium-resolution camera on a fixed mounting plate near its high-resolution counterpart and proceeded to make a series of electrical connections. They then traced the power lines to the patch panel to confirm they were properly plugged in. But flight controllers apparently did not receive the expected telemetry.

Ryazanskiy then was asked to disconnect and re-mate a suspect cable where it plugged into the patch panel. That apparently didn't resolve the problem, so he disconnected and re-mated two additional cables in a bid to enable a steady stream of telemetry. Again, flight controllers said they were not receiving the expected data.

While Ryazanskiy worked with the cabling, Kotov retrieved a NASA spacewalk tool with a disconnected locking pin and then collected a space exposure experiment, the only other items on the crew's timeline.

After three cable connectors had been disconnected and re-mated, flight controllers told the cosmonauts to head back to the Pirs airlock and to leave the cameras in place. Based on translated air-to-ground traffic between the cosmonauts and the Russian mission control center, it appeared the medium-resolution camera was out of action.

"What do you think now?" someone asked on the space-to-ground audio channel.

"Well, no thoughts," someone, apparently a flight controller, replied. "But as far as I understand it, something is either wrong with the (software) files or anything else

"I do not believe the connector is not mated."

"OK, copy," one of the spacewalkers replied.

The medium-resolution camera is intended to provide a fixed view of the ground 260 miles below, distinguishing surface features roughly 16 feet across in 25-mile-wide strips of imagery. The high-resolution 4K camera, attached to an aiming mechanism installed during an earlier spacewalk, can be pointed at specific targets. It can distinguish objects as small as 3.3 feet across.

UrtheCast plans to provide a free stream of basic imagery while more specific targeting requests will be billed at yet-to-be-specified rates.

Monday's spacewalk was the 178th devoted to station assembly and maintenance since construction began in 1998, the first so far this year, the sixth for Kotov and the third for Ryazanskiy.

One hundred and 14 astronauts and cosmonauts representing nine nations have now logged 1,121 hours and 52 minutes of station EVA time, or 46.7 days. Kotov's total now stands at 36 hours and 51 minutes, moving him up to 29th on the list of most experienced spacewalkers.