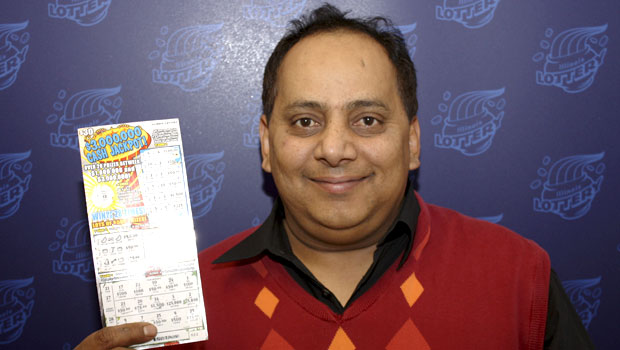 (CBS/AP) CHICAGO - The widow of Chicago lottery winner Urooj Khan said she cannot believe her husband had enemies who would kill him as he awaited a $425,000 check that he planned to use to pay off mortgages and donate to a children's hospital.

Shabana Ansari, 32, spoke to The Associated Press on Tuesday, a day after news emerged that 46-year-old Khan did not die of natural causes in July, as authorities initially concluded. Prosecutors, police and the Cook County Medical Examiner's Office are investigating Khan's death as a homicide, but they have not given any further details in the case.

They have also not identified the relative who asked for an expanded screening after the initial cause of death was released. Ansari said she didn't make the request and doesn't know who did.

Ansari said Khan fell ill shortly after they ate dinner together. She would not talk about the circumstances of her husband's death, saying it was too painful to recall.

"I was shattered. I can't believe he's no longer with me," Ansari said.

Ansari described Khan as a hard-working and generous man who sent money to orphanages in their native India. She said she can't recall anyone unusual or suspicious coming into their lives after the lottery win became public, but she hopes the truth of what happened to her husband will come out.

"I don't think anyone would have a bad eye for him or that he had any enemy," Ansari said.

Khan planned to use his lottery winnings to pay off mortgages, expand his business and make a donation to St. Jude Children's Research Hospital. Ansari said her husband did not have a will and the money is now tied up in probate.

Authorities plan to exhume Khan's body in the next few weeks in hopes they might be able to test additional tissue samples and bolster evidence if the case goes to trial. Cook County Medical Examiner Stephen Cina said he did not believe additional testing would change the conclusion that Khan was a homicide victim.

"Based on the investigative information we have now and the (toxicology results), we're comfortable where we are right now," he said.

Ansari and Khan were born in Hyderabad, a city in southern India. Their daughter, Jasmeen, now 17, is a student in the United States.

"Work was his passion," Ansari said of her husband, adding that she plans to stay in the U.S. and keep his businesses running.

"I'm just taking care of his hard work," she said.

She recalled going on the hajj, the Muslim pilgrimage in Saudi Arabia, with her husband in 2010. One of Islam's pillars requires every able-bodied Muslim to make the journey at least once in their lifetime.

She said her husband returned even more set on living a good life and he stopped buying the occasional lottery ticket.

Nonetheless, he couldn't resist buying one for an instant lottery game in June while at a 7-Eleven near his home. It was a $1 million winner.

Khan opted for a lump sum of slightly more than $600,000. After taxes, it amounted to about $425,000, said lottery spokesman Mike Lang. The check was issued on July 19, the day before Khan died.

Some other states allow winners to remain anonymous, but Illinois requires most winning ticket holders to appear for a news conference and related promotions, partly to prove that the state pays out prizes. Khan's win didn't draw much media attention, and Lang noted that press events for $1 million winners are fairly typical.

"We do several news conferences a month for various amounts," he said.