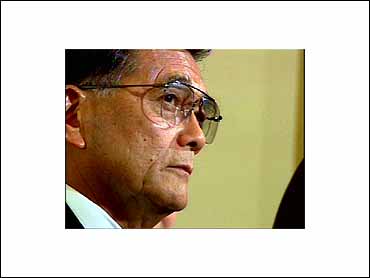 After Norman Mineta was nominated to be Commerce Secretary last week, the White House received dozens of approving faxes about the choice of the former congressman, a Japanese-American.

S. B. Woo bets a lot of those faxes originated from his political organization, whose members have waited a long time to see an Asian American in a Cabinet post.
"It was very significant" and an "historic day," said Woo. "But it's one of many new pages to be turned for Asian Americans in our history." The measured enthusiasm reflects Woo's philosophy towards American politics. "We can be patient," he said, "as long as we can see slow and steady progress toward equality."

That isn't the way that Woo and other Asian Americans saw during the 1996 Democratic fundraising scandal, when he said his community as a whole was tarnished by the wrongdoing of a few. Asian Americans as a group were dealt a political setback, he said, as Democrats sought distance from the community and Republicans treated them like foreigners. "That incident was what made a lot of people decide we need to do things differently," he said.

Woo, a former Democratic lieutenant governor of Delaware and a physics professor at the University of Delaware, embarked on an experiment. He helped create a new online political action committee - known as the 80-20 Initiative - whose purpose is not so much about raising money as it is about raising political clout for Asian American voters.

The group, which currently has 250,000 members on its e-mail list, hopes to have at least 400,000 by November. 80-20 will vote to endorse one of the presidential candidates at the end of August and promises to deliver that candidate 80-percent of the Asian vote - hence the name of the group.

Despite vast cultural and linguistic differences within the Asian American community, Woo insists they share a common, unifying goal. "We all want to be first-class citizens and have equal opportunity in the workplace," he said.

But delivering that vote may not easy. Experts point out that even Asian American candidates struggle to achieve such a high percentage of the community's vote.

"This is a very fractured bloc," said Frank Wu, a law professor at Howard University in Washington, D.C. who frequently writes about Asian American affairs.

Wu said 80-20 will serve a valuable role if it encourages Asian Americans to become more politically active and interested in the issues that affect them. But he doesn't think it will succeed in telling Asian Americans how to vote - and he's not sure that it should.

On the one hand, said Wu, "politicians appeal only to demographic groups." But while the bloc voting increases a group's clout, they also risk "being taken for granted."

Even as a bloc, Asian Americans comprise four percent of the population nationwide. But they have the potential to impact close elections because they are cocentrated in states rich in electoral votes: California, New York and Texas. With its 54 electoral votes, California has an Asian American population of 3.9 million, or 12-percent of its electorate. While the community is not growing at the same explosive rate as Latinos, its population within the Golden State is expected to double in the next 20 years.

The major presidential candidates "haven't really targeted Asians, and it's kind of a mystery to me why they haven't," said Michael Alvarez, a political scientist at Cal Tech University. Alvarez, who studies voting trends in California, said Asian Americans will have a voting impact similar to African Americans this election year. But unlike blacks, who traditionally vote heavily Democratic, the Asian American vote is a swing vote up for grabs. "They can go either way," said Alvarez.

According to Don Nakanishi, director of the Asian American Studies Center at UCLA, the Asian vote is generally split evenly into Democrats, Republicans, and independents. That third of non-affiliated voters is higher than in any other group, he said.

"There is the potential for Asian Americans to move their weight and have an impact," said Nakanishi. For a historical analogy, he pointed to the critical role that Jews have played on the political stage despite their small numbers. Like Asian Americans, they account for just three to four percent of the nation's population.

Frank Wu of Howard University agreed, observing that average Jewish citizens are "more deeply involved in politics" than their minority counterparts. He hopes groups like 80-20 will motivate Asian Americans to do the same.

But S. B. Woo is more interested in delivering votes than motivating - and he hopes the presidential candidates are paying attention. He said Mineta's nomination is the type of "concrete deed" his group will demand of a candidate before it bestows an endorsement.

Woo said Texas Governor George W. Bush is still in the running, but added, "The Republican Party needs to hustle and do something" in Congress, such as tackling workplace discrimination.

An election year, said Woo, is "the time for politicians to listen to us. That's the way our forefathers designed the system to work."