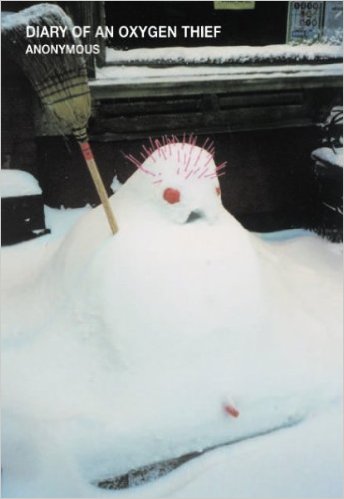 NEW YORK -- The fair-skinned man with the hoodie and dark ski cap sits on a bench outside McNally Jackson Books in downtown Manhattan, where neither patrons nor employees seem aware that he's the author of a work so in demand at the store that it's often out of stock.

Known to his growing fan base as "Anonymous," he has given us one of the more unusual self-published successes: "Diary of an Oxygen Thief," a 147-page fictionalized memoir, or autobiographical novel, depending on how much of this story of a recovering alcoholic and the damage he has inflicted and absorbed you care to believe.

"It has an unusual negative space," says the author, who on email uses the names Tom Wilkinson and Stanley Easyday and prefers to be identified as O2Thief. "It couldn't be more naked, but at the same time ... 'Who the hell is it?' I think it's a very powerful place to write."

Some books catch on immediately, others take their time, but "Oxygen Thief" has really followed the scenic route. First published by the author in 2006, the book has slipped on and off the charts ever since, apparently dependent on the occasional tweet or other online comment. "Oxygen Thief" has been such a homegrown operation that the author not only served as his own editor and cover designer, but has also sold the book in the streets and would personally ship it to retailers, sometimes taking on orders for thousands of copies.

His workload is about to lighten. This year, "Oxygen Thief" cracked the top 20 on both Amazon.com and iTunes, enough to interest literary agent Byrd Leavell and eventually a publisher, Gallery Books, a pop culture imprint of Simon & Schuster that plans to release an e-edition this week and a paper version in mid-June. (Film rights have been acquired by Gotham Group.)

Douglas Singleton, a buyer and manager at McNally Jackson, said the store has sold more than 200 copies of "Oxygen Thief," the in-house record for a "consignment order." Asked if he has met the author, Singleton said he wasn't sure. He thinks the man who delivers copies of "Oxygen Thief" is the book's writer, but it's been a couple of years since he's seen him.

"We've often talked about the mysterious nature of the person who drops off the book," Singleton said. "I have an email address for him and sometimes I'll contact him and say we're sold out and we need another 20 copies. And I get no answer back. Then I'll be walking behind the register one day and there'll be 20 copies. And one of my co-workers will say, 'Someone dropped off a bag and said it was for you.'"

Mainstream recognition does not mean you will learn more about him, beyond what he includes in the book. Anonymous authors, even ones who meet with reporters, don't do book tours. Ruby-Strauss is counting on social media (the author himself has a website, http://www.02thief.com , and Twitter feed, 02thief) and expects that he will give telephone interviews.

"The book has such an underground feel to it, a nontraditional promotional campaign focusing on these elements makes perfect sense," the editor said.

As his readers would assume and his accent suggests, the author says he is a native of Ireland, who has lived everywhere from London to Minneapolis, but has spent the past decade in New York. Like the narrator of his book, he has spent much of his professional life in advertising. He declines to give his exact age, but says - plausibly - that he's at least 40.

The author had never attempted a book before "Oxygen Thief," but wanted to give it a try, unsure if or why anyone would care about a man who begins his tale by confiding, "I liked hurting girls." The first half reads like a variation of J.P. Donleavy's "The Ginger Man," the comic saga of a ne'er-do-well and the affairs ruined by his own design. The gods strike back in the second half as the O2Thief falls for a photographer identified as Aisling and eventually learns - or thinks he learns - she is using him for a book about relationships.

"We can't be sure this really happened," the author explained. "It's like a Hitchcockian story - his view of the world."

"When I started the book, I understood immediately why it had captured the spirit of the times," Ruby-Strauss said. "I continued reading, and I discovered it was not the book I thought it was; then I finished reading, only to find my latter revelation was also incorrect. I felt unsettled about the whole thing for several days, which struck me as very promising."

Self-published best-sellers often debate whether to sign on with a traditional publisher, whether the loss of independence is compensated by the security and resources that enable them to focus solely on writing. The O2Thief is happy to try it both ways. He will continue to be his own boss for his next two volumes: "Chameleon on a Kaleidoscope," released in 2012 and yet to attain the popularity of "Oxygen Thief," and the upcoming "Eunuchs and Nymphomaniacs," inspired by what he calls "an inherent incompatibility between the sexes."

He'll consider deals for those books only if "the demand for them also becomes insatiable."