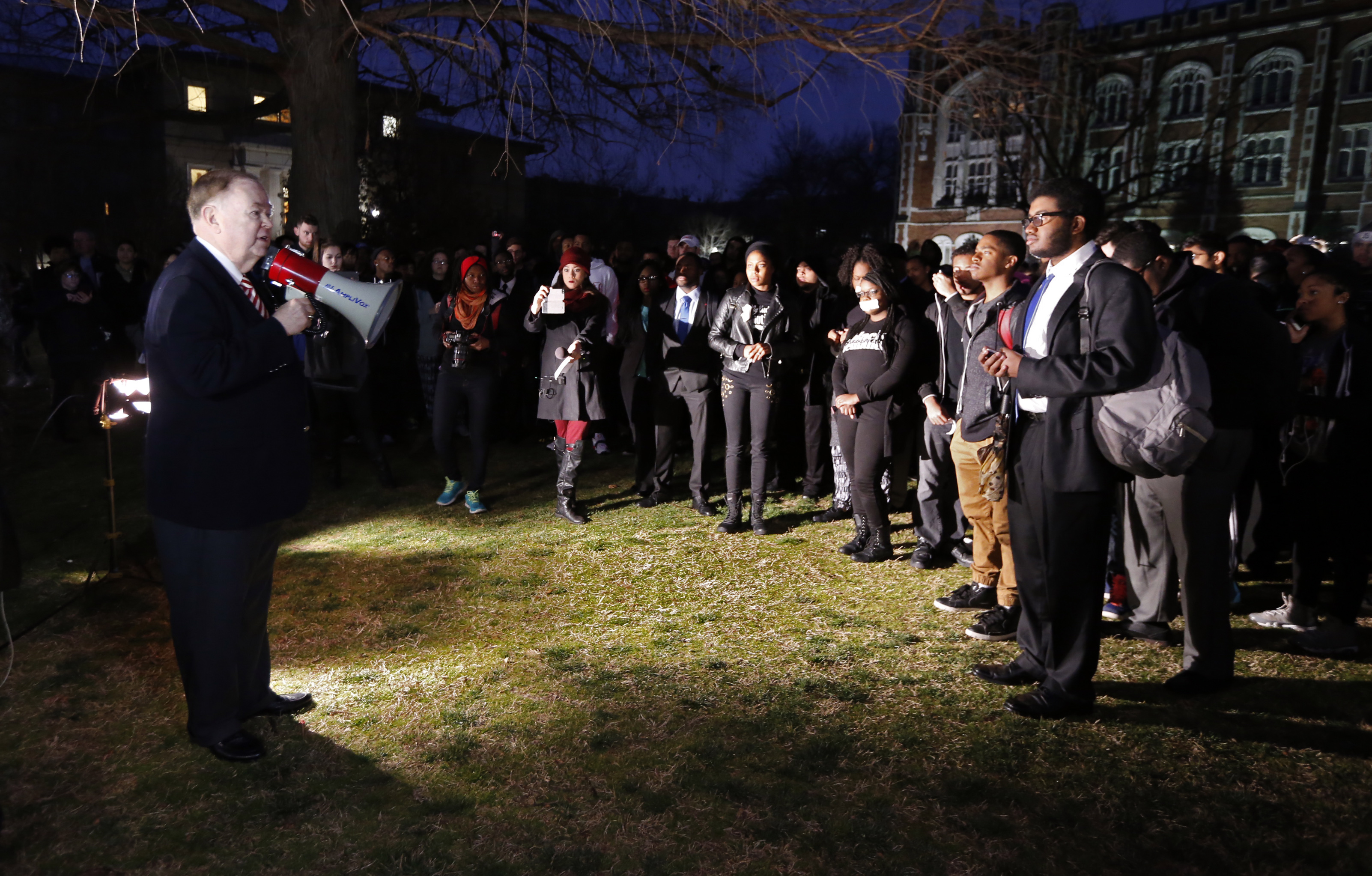 NORMAN, Okla. - A video showing members of a University of Oklahoma fraternity engaged in a racist chant could end up getting some of them tossed from school or worse, the school's president warned on Monday.

The national organization Sigma Alpha Epsilon said Sunday night that an investigation had confirmed the contents of the video showing multiple people chanting a racial slur against black people and indicating that blacks would never be admitted to the fraternity. The chant also references lynching.

The fraternity issued an apology to its membership and promised that the fraternity members involved in the video would be kicked out.

"This behavior was in no way reflective of who we are as SAEs and what we stand for.To those that were hurt and offended by these actions, especially the African American community and our Many African American Brothers, I apologize on behalf of our now closed chapter and its members who will be expelled," said a statement from Brad Cohen, the SAE national president. "After all the good and positive changes we have made, let us focus on who we really are."

Both the national chapter and the university announced immediately after confirming the video's contents that the local chapter was being shuttered. But University of Oklahoma President David Boren said Monday at a press conference the punishment may not end there.

"I think the best way for us to send not only a message to this campus but also across the country is (to show) that there's zero tolerance for this kind of racist behavior," Boren said. "Those students (in the video) will be out of that house and that house will be closed and as far as I'm concerned it won't be back, not as long as I'm president of the university."

Boren also singled out those who had "leadership roles in orchestrating the chant, pushing forward this chant," as having opened themselves up to possible expulsion from the school or worse. He said his legal team was looking into how Title VI of the Civil Rights Act might affect the punishments he and law enforcement are able to mete out.

"I'd be glad to throw them out," Boren said, adding that some involved are now technically homeless and the school won't help them find new housing.

Boren released a statement earlier in the day saying members had until midnight Tuesday to remove their personal belongings from the fraternity house.

A link to the video was posted by OU Unheard, a black student group on campus, after someone anonymously called it to the group's attention, communications director Alexis Hall said Monday.

It's unclear who recorded the video, when it was recorded and who initially posted it online. Hill said a link to the video was sent Sunday afternoon to the student group, which formed in the fall in response to a fatal police shooting in Ferguson, Missouri. The video appears to have been taken on a charter bus, with at least one of the chanting students wearing a tuxedo.

Subsequently, a second video surfaced that appears to show someone on the bus waving as if to tell the people doing the recording to stop.

Boren praised whoever took the video, saying he is "proud of the fact that they helped expose this kind of activity." He added that the school will work hard in its investigation to make sure that people like whoever took the video won't be caught up in the punishment for the perpetrators of the chant.

CBS affiliate KWTV in Oklahoma City reports the 10-second video clip first surfaced early Sunday afternoon and immediately went viral. The footage appears to have been shot by a passenger on a chartered bus with several members of the fraternity.

The station says the incident apparently happened on Saturday.

The closure of the local chapter of the Sigma Alpha Epsilon fraternity by the national branch appears to be a sharp fall from grace.

According to the website of the University of Oklahoma chapter, they were given the "John O. Moseley Zeal Award" in 2013, which "recognizes the chapter that best exemplifies a model chapter in Sigma Alpha Epsilon."

Hundreds of students gathered on the school's Norman, Okla., campus Monday morning to protest the behavior.

Boren said one of the things that upset him the most is how much of an aberration the behavior shown in the video is to him, something Ogbo Okoronkwo, a redshirt sophomore linebacker for the school's beloved football team, seemed to agree with in a Twitter message.

Numerous students across the campus expressed shock and outrage as news of the incident spread.

"I was shocked they were just doing it openly on the bus, like they were proud of it," said Jared Scarborough, a junior in construction science. "From the chant you could tell they had done it before. It wasn't a first-time thing. And it was everybody. And the fist-pumping."

The University of Oklahoma, located in the southern Oklahoma City suburb of Norman, has about 27,000 students, about 5 percent of whom are black. The fraternity system is largely segregated.