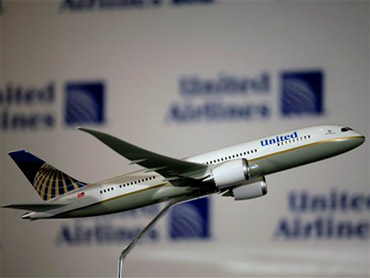 United Airlines has agreed to buy Continental in a $3 billion-plus deal that would create the world's largest carrier with a commanding position in several top U.S. cities.

The new United would surpass Delta Air Lines in size, which should help it attract more high-fare business travelers. It will fly to 370 destinations in 59 countries.

The companies insisted the deal is a merger of equals.

But United shareholders will hold a majority stake, the airline will be based in United's hometown of Chicago and it will be called United.

It would be run by current Continental CEO Jeffery Smisek, however. United CEO Glenn Tilton, a longtime advocate of consolidation in the airline industry, will be non-executive chairman for up to two years before Smisek adds the chairman title.

The new parent company will be called United Continental Holdings Inc., and have about $29 billion in annual revenue based on 2009 results and $7.4 billion in unrestricted cash. The airlines said combining would save them $1 billion to $1.2 billion a year by 2013, including between $800 million and $900 million in new yearly revenue.

The deal would create a giant with major hubs in key domestic markets including New York, Los Angeles, Chicago, Houston and San Francisco and an international network stretching from Shanghai to South America.

It will leave three big U.S. airlines with major international routes — the new United, Delta and American Airlines, with US Airways a distant fourth.

United is the nation's third-largest carrier by traffic, while Continental Airlines Inc., in Houston, is No. 4.

Wall Street has pushed consolidation as a way to let airlines raise fares by reducing the number of flights and seats. Antitrust regulators are likely to scrutinize the deal for its effect on fares, but Smisek and Tilton said even a larger United won't have power to boost prices because other carriers might undercut them.

Two years ago, Continental walked away from a deal with United at the last moment. Smisek said in an interview that times have changed since 2008, when both airlines were low on cash and facing record fuel costs.

"Both carriers are performing better than they have been for the past couple of years," he said. "The economy is on an upswing. Fuel prices, although high, are manageable."

The two carriers are similar in size. As of Friday's closing stock prices, UAL's had a stock market value of $3.6 billion, while Continental's was $3.1 billion.

The companies expect to close the deal in the fourth quarter, with approval needed from shareholders and regulators.

The deal came together in just three weeks after reports surfaced that United was in discussions with US Airways, the nation's No. 6 airline.

"I recognized that United is the best possible partner for Continental," Smisek said on a conference call. "I didn't want him (United's Tilton) to marry the ugly girl; I wanted him to marry the pretty one, and I'm much prettier."

Labor issues have often been messy in airline consolidation. Smisek and Tilton said they had briefed their unions on the deal. Both companies said their boards had approved the transaction unanimously, which would include a labor representative on the UAL board.

Pilots at both airlines are represented by the Air Line Pilots Association. People briefed on the negotiations said the two groups have not started negotiations on a joint contract.

The machinists' union, which represents 16,000 workers at United and more than 10,000 Continental employees, said it was concerned about the impact of the deal on pensions, benefits and job security.

Both United and Continental have been losing money first due to higher fuel costs, then a recession. Last year, UAL lost $651 million while Continental lost $282 million. Revenue plunged 19.1 percent at UAL and 17.4 percent at Continental.