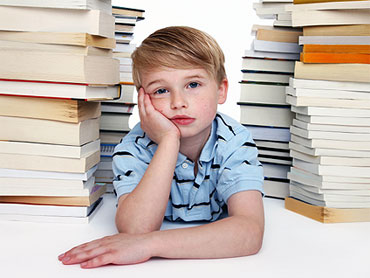 A lot of kids play sick to get out of school. But what if it's anxiety about school that is making them really sick? There is an actual phobia of school, called school phobia, school refusal or didaskaleinophobia. It affects two to five percent of schoolchildren, according to the Anxiety Disorders Association of America.

On "The Early Show" Monday, contributor Dr. Jennifer Hartstein, a child and adolescent psychologist, shared what the symptoms are, and what you can do about it.

Hartstein explained the average age for onset is 7.5 years, and it commonly takes place at times of transition such as entering middle school or high school. Children who suffer from school refusal tend to have average to above average intelligence. According to Web MD, it can last for up to four weeks, depending on chosen treatment. As many as 40 percent of students who do not graduate high school have a diagnosable mental disorder, and as many as half of those have anxiety disorders such as post traumatic stress disorder (PTSD) or school refusal.

What are the symptoms? Hartstein says the first symptoms will be actual physical manifestations of the disease. The child will feel nauseous, have diarrhea or vomit. They will have headaches, perhaps faint. They will feel tired and generally listless. These symptoms can be very real, and they are similar to symptoms that an adult suffering from anxiety disorders will feel.

What causes it? One of the most common reasons is performance anxiety, Hartstein says. Kids who are perfectionists, or who are concerned about their schoolwork will often suffer. That is a huge weight for kids, says Hartstein, and not to be underestimated. Kids feel pressure, just as greatly as adults do, if not more so. Perhaps they have been absent for a substantial illness, and are concerned they won't catch up. Perhaps they are very intense about success which causes a real concern about failure.

Other causes could be a recent or impending family trauma, such as a move or a divorce. Or, perhaps it's caused by a recent traumatizing transition, such as a move from middle to upper school, or a school transfer. If the cause is rooted in a family trauma, such as divorce, school refusal seems a great deal more like separation anxiety, says Hartstein. The child does not want to go to school because they want to control what is going on at home, to protect mommy, or to make daddy stay. If they go to school, they will lose control.

Another cause of school refusal could be bullying. Perhaps there is a specific reason that your child would refuse to go school such as being picked on, or avoiding a confrontation or fight. It can be difficult for a child's mind to find perspective when their friends turn on them, or they are being humiliated by a bully. It can seem like the end of the world, and that can cause stress that physically manifests itself in school refusal.

Another cause of school refusal might be, well, parents. Kids absorb adults' emotions, especially stress and fear. When adults panic, kids panic. Are you someone who stresses easily? Do you yourself have an anxiety disorder? Kids are fantastic at absorbing their parents' emotions. And if you are someone who is easily thrown off, then your child might react with intensity of his or her own. Keeping calm in front of your child might really help ease some of their pain.

How do you know if your child has school refusal or is playing hooky? Hartstein says that the main way to tell is if your child begs you to stay home from school, and you acquiesce, an instant recovery or relief. Kids thrive on relief, and it will probably be a change you can immediately see. That doesn't mean that your child's school refusal physical symptoms are faked. If their anxiety is making them so upset that they are vomiting, than there is real fear there, and again, that is not to be underestimated. But at being allowed to avoid school, their systems will relax and it will cause a difference you will be able to sense.

How do you fight actual school refusal in your child? Obviously your first step is to figure out if this is a real sickness, if there are real problems here. Once you have figured that out, you need to get to the root of what the problem might be. Hartstein recommends asking open-ended questions as a first and foremost means of action. Saying "Just go to school already" is not going to work. Ask them questions like, "What is it about school you don't like? What is your schoolwork these days? What's happening with your friends? Is anyone bothering you at school?" Ask what they like about school to try to get them to remember what might be positive about it. Make sure that these questions lead to an open communication between you and your child about school and what is going on with it. Let them know you are there for them.

Contact the school, the guidance counselor, the teacher, or the school nurse. Set up a line of communication with them so that they can recognize the signs of what is going on with your children. Get them aware of your child's school refusal, and let your child know that whatever support you have set up for them at school is there any time they need it.

If you really can't get them to go, and they are hysterical at the very thought, the tantrums are out of control, and you can't physically get them to the building, do not force them, Hartstein says. You might slowly be able to get them back, if you introduce it to them a little at a time. Maybe they go for the first two periods for a few days, then they try a third, a fourth, until they are attending whole days at school. Show them through that gradual process that school does not have to be something to be afraid of. Know though, that if there is this much of a problem, you're child needs to be psychologically evaluated. Whether you are able to get them back to school or not, they need help.