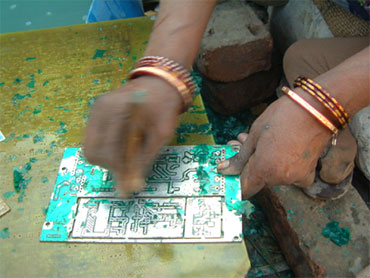 Sales of household electrical gadgets will boom across the developing world in the next decade, wreaking environmental havoc if there are no new strategies to deal with the discarded TVs, cell phones and computers, a U.N. report said Monday.

Electronic waste is piling up around the world at a rate estimated at 40 million U.S. tons (36 million metric tons) a year, the report said, noting that data remain insufficient.

"The U.N. began to deal with the e-waste issue twenty years ago with a Convention regarding the movement of hazardous wastes, so that developed countries did not dump their toxic waste in developing countries," said CBS News foreign affairs analyst Pamela Falk.

"Now the U.N. agencies are trying to tackle the domestic problem of recycling of this dangerous waste, since developing countries — including China, India, Brazil and Mexico — today produce a large share of their own."

UNEP Executive Director Achim Steiner said the globe was ill-prepared to deal with the explosion of electronic gadgets over the past decade.

"The world is now confronted with a massive wave of electronic waste that is going to come back and hit us, particularly for least-developed countries, that may become a dumping ground," Steiner told The Associated Press ahead of a UNEP executive meeting in Bali.

He said some Americans and Europeans have sent broken computers to African countries falsely declared as donations. The computers were dumped outside slums as toxic waste and became potential hazards to people, he said.

The report predicts that China's waste rate from old computers will quadruple from 2007 levels by 2020.

It said the fastest growth in electronic waste in recent years has been in communications devices such as cell phones, pagers and smart phones.

Last week the U.N.'s International Telecommunication Union (ITU) said the number of mobile phone subscriptions worldwide is expected to increase to five billion this year. Precious and special metals as well as base metals account for approximately one-quarter of the weight of a mobile phone, which points both to the value of recycling and the increased demand for such metals as cell phone use has grown.

In fact, today's UNEP report states that the combined sales of mobile phones and PCs in 2007 account for 3% of the world mine supply of silver and gold, 13% of palladium, and 15% of cobalt.

Given that the average life span of a cell phone is 18 months (according to EPA) and of computers from 2 to 4 years, a good portion of that 2007 inventory is likely already in the trash.

Small-scale recycling of e-waste can have advantages — less energy may be used to extract precious metals from junked components than to mine new ore, and low-skilled workers can find employment. But the disadvantages are serious: recycling metals improperly can release toxins (such as mercury, lead and dioxins), affecting workers, neighborhoods and the environment.

Most of the recycling of electronic waste in developing countries such as China and India is done by inefficient and unregulated backyard operators. The environmentally harmful practice of heating electronic circuit boards over coal-fired grills to leach out gold is widespread in both countries.

The report called for regulations for collecting and managing electronic waste, and urged that technologies be transferred to the industrializing world to cope with such waste.

"In many poor countries, the issue of recycling is a question of expense," said Falk, "and several U.N. agencies are trying to raise funds."

While electrical products such as refrigerators, air conditioners, printers, DVD players and digital music players account for only a small part of the world's garbage, their components make them particularly hazardous. 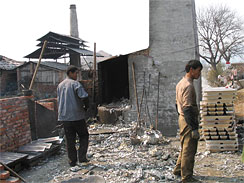 (UNEP/STEP Initiative-EMPA)
(Left: Open burning at informal smelters (like this one in China) is widely used in developing countries to recover metals such as copper, steel and aluminum from wires, capacitors and other components. Printed wiring boards may be leached of gold by melting them in molten lead-tin solder over coal-fired grills and then subjecting them to acid baths. Once all recoverable metals are extracted, the resulting waste is dumped, causing further ecological and health hazards.)

Prof. Eric Williams, an Arizona State University expert on industrial ecology who did not participate in the UNEP study, said it was difficult to comment on the credibility of the electronic waste growth forecasts because the report gives little explanation of how they were calculated.

"It is the environmental intensity of e-waste rather than its total mass that is the main concern," Williams told the AP via e-mail.

"If e-waste is recycled informally in the developing world, it causes far worse pollution than the much larger mass of regular waste in landfills," he said.