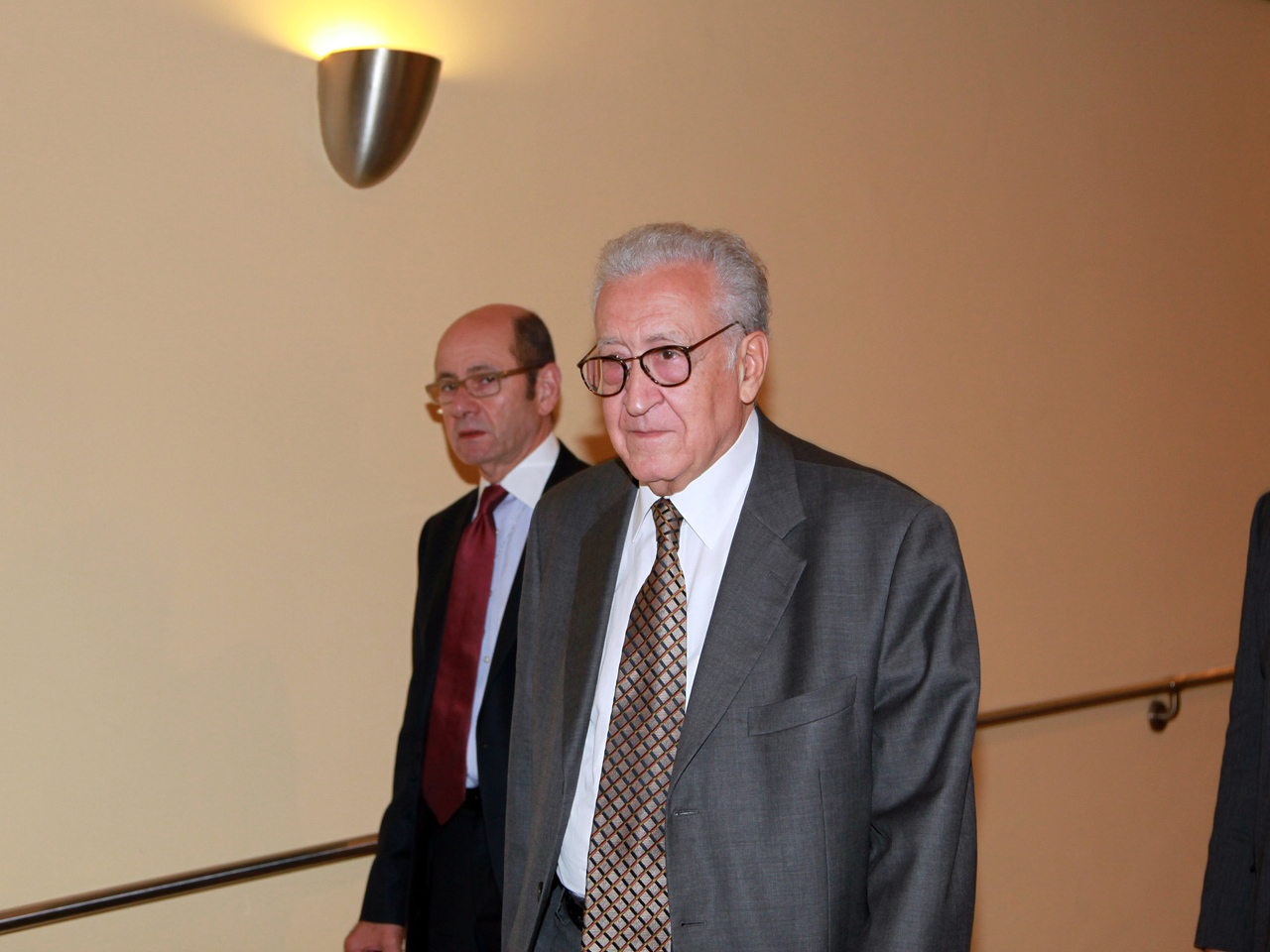 (AP) UNITED NATIONS - Syria's civil war is worsening and there is no prospect of a quick end to the violence, international envoy Lakhdar Brahimi said Monday in a gloomy assessment to the U.N. Security Council.

The new envoy leavened his message, however, saying he was crafting a new plan that he hoped could break the impasse, but refused to give details or say when it would be ready.

Despite President Bashar Assad's refusal to end his family's 40-year grip on power, some tentative hope of a solution remained, Brahimi said in his first briefing to the council since he took over from Kofi Annan on Sept. 1 as the U.N.-Arab League special representative for Syria

"I think there is no disagreement anywhere that the situation in Syria is extremely bad and getting worse, that it is a threat to the region and a threat to peace and security in the world," Brahimi told reporters after the closed-door talks.

Activists claim nearly 30,000 people have died in the uprising which began in March 2011, including in attacks Monday by Syrian warplanes in the northern city of Aleppo.

Brahimi had just returned from Syria and refugee camps in Jordan and Turkey. His gloomy report of a looming food crisis, battle-damaged schools and shuttered factories, contradicted his insistence that he saw grounds for optimism, including "some signs" that the divided Syrian opposition may be moving toward unity. That is key for any political negotiations Brahimi would oversee.

"Paradoxically, now that I have found out a little more about what is happening in the country and the region, I think that we will find an opening in the not too distant future," Brahimi said.

Brahimi said he wanted to hold further discussions before disclosing precisely what action he plans to propose. "I do not have a full plan for the moment, but I do have a few ideas," he said.

According to a diplomat inside the council's private briefing, who demanded anonymity because he was not authorized to publicly to reveal details, Brahimi was also reluctant to discuss the proposals with the Security Council. "He kept his cards very close to his chest," he said.

In the private talks, Brahimi urged Security Council members to overcome the diplomatic deadlock which has paralyzed their ability to help end the crisis.

The Security Council is the only U.N. body that can impose global sanctions and authorize military action. Russia, Syria's key protector, and China have vetoed three Western-backed resolutions aimed at pressuring Assad to halt the violence and open talks with his opponents on a transition of power.

"If I do not represent the entire council, I am nothing. I need to be seen to represent a united council and a united League of Arab States," Brahimi told reporters.

Brahimi told the council that he believed Assad's goal was to return the country to "the old Syria," in which he and his father had ruled as dictators for four decades, the diplomat said.

He said Brahimi claimed Assad's intention was to portray the uprising as fueled by outside nations in a bid to discredit his internal opponents.

The envoy told the meeting that food shortages are likely in Syria because of a poor harvest and citizens fear seeking hospital treatment when injured. Brahimi said about 2,000 schools had been damaged and others used as shelter by those who had lost their homes. Many factories and pharmaceutical laboratories were destroyed or falling into disrepair, according to the diplomat.

Despite a call from Germany's Foreign Minister Guido Westerwelle to maintain backing for Annan's six-point peace plan, which starts with a cease-fire and ends with a political transition, Brahimi said only that the ideas would remain "elements in my toolbox."

Brahimi said it wasn't yet clear how his new proposals might incorporate Annan's plan and a June declaration by world leaders in Geneva backing the peace process.

Annan's plan never took hold and was largely ignored by the government and the rebels before it ultimately collapsed.

Iranian President Mahmoud Ahmadinejad, meanwhile, said that Iran is neutral in the Syrian civil war, and denied allegations that Tehran is providing weapons or training to Assad's regime.

"We like and love both sides, and we see both sides as brothers," he said. He referred to the conflict in Syria as "tribal" fighting and said that international "meddling from the outside has made the situation even harder." He refused to say whether Iran would accept a government not led by the Assad regime, which for years has been Iran's closest ally in the Middle East.

Ahmadinejad also alluded to the U.S.-made amateur anti-Islam video, accusing the United States and others of misusing freedom of speech and faiiing to speak out against the defamation of people's beliefs and "divine prophets."