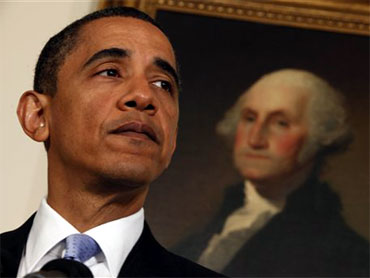 Mr. Obama called them the toughest sanctions ever faced by the Iranian government, even though the final version was not as tough as what his administration initially proposed.

Speaking at the White House shortly after the U.N. vote, Mr. Obama said that Iranian leaders continue to "hide behind outlandish rhetoric" while moving ahead with "deeply troubling" steps on a path toward nuclear weapons.

In Dushanbe, Tajikistan, where he is on an official visit, Iranian President Mahmoud Ahmadinejad said "we do not recognize sanctions."

"From right and from left, they adopt sanctions, but for us they are annoying flies, like a used tissue," Ahmadinejad said.

With Middle East tension high and Iran at the center of the storm, the Obama administration successfully got China and Russia to back the new sanctions resolution, the U.N.'s fourth since 2006, CBS News Foreign Affairs Analyst Pamela Falk reports.

"Iran is high on President Obama's agenda for good reasons: Iran's Red Crescent Society announced this week that a 3,000 ton vessel is heading soon for Gaza; International Atomic Energy Agency inspectors reported that Iran has enough nuclear fuel, if enriched, for two nuclear weapons, and U.S. Defense Secretary Robert Gates, in London, said the U.S. has not lost the ability to stop Iran from getting a nuclear weapon, but the clock is ticking," Falk said.

U.S. Secretary of State Hillary Rodham Clinton said Iran's decision to turn its back to White House overtures convinced the world of the need for sanctions.

"The challenge that President Obama faced in trying to reach out and engage Iran was politically difficult, but it served a very important purpose to demonstrate clearly that the United States was willing to pursue diplomatic engagement," she said.

The resolution imposing the latest sanctions against Iran was approved Wednesday with 12 "yes" votes, two "no" votes from Brazil and Turkey, and one abstention from Lebanon.

Before the vote, Turkey and Brazil, both non-permanent council members, brokered a fuel-swap agreement with Iran which they hoped would address concerns Tehran may be enriching uranium for nuclear weapons and avoid new sanctions.

Iran's U.N. Ambassador Mohammad Khazaee defended the country's right to produce nuclear energy and accused the United States, Britain and their allies of abusing the Security Council to attack Iran.

"No amount of pressure and mischief will be able to break our nation's determination to pursue and defend its legal and inalienable rights," Khazaee said. "Iran is one of the most powerful and stable countries in the region and never bowed - and will never bow - to the hostile actions and pressures by these few powers and will continue to defend its rights."

"These sanctions are as tough as they are smart and precise," U.S. Ambassador Susan Rice said after the vote, dismissing Khazaee's statement as "ridiculous" and "reprehensible."

"Today the Security Council has responded decisively to the grave threat to international peace and security posed by Iran's failure to live up to its obligations under the Nuclear Non-Proliferation Treaty," Rice said after the vote, CBS Radio News reports.

"We have been sanctioned for the last 30 years, and it had not had an effect on Iran and it will not have any effect on Iran in the future," the man said. "We are determined to become the eighth nation in the world for peaceful energy activities, and therefore it makes us more determined to follow our goal."

Immediately after the Security Council vote, the White House released a statement saying, "The United States remains open to dialogue, but Iran must live up to its obligations and clearly demonstrate to the international community the peaceful nature of its nuclear activities."

Mr. Obama said the United States "will ensure that these sanctions are vigorously enforced."

"These sanctions show the united view of the international community that a nuclear arms race in the Middle East is in nobody's interest," Mr. Obama said at the White House. "The Iranian government must understand that true security will not come through the pursuit of nuclear weapons. True security will come through adherence to international law and demonstration of peaceful intent."

Brazil and Turkey delayed the sanctions vote by an hour because the representatives for both countries were waiting for word from their foreign ministries on whether to vote for or against, Falk reports.

Brazil and Turkey, in voting against sanctions, complained that the proposal for Iran to export low-grade uranium was not given its due and that the sanctions resolution was negotiated behind closed doors, Falk reports.

The Security Council imposed limited sanctions in December 2006 and has been ratcheting them up in hopes of pressuring Iran to suspend enrichment and start negotiations on its nuclear program. The first two resolutions were adopted unanimously and the third by a vote of 14-0 with Indonesia abstaining.

Iran has repeatedly defied the demand and has stepped up its activities, enriching uranium to 20 percent and announcing plans to build new nuclear facilities. Tehran insists its program is purely peaceful, aimed at producing nuclear energy.

The U.S. and its allies believe Iran's real aim is to produce nuclear weapons and want Iran to suspend uranium enrichment and start negotiations on it nuclear program.

"We want to be sure that we don't just pass the sanctions and then leave it to chance as to whether or not they are being implemented," she said.

The new resolution bans Iran from pursuing "any activity related to ballistic missiles capable of delivering nuclear weapons," bars Iranian investment in activities such as uranium mining, and prohibits Iran from buying several categories of heavy weapons including attack helicopters and missiles.

It imposes new sanctions on 40 Iranian companies and organizations - 15 linked to Iran's powerful Revolutionary Guard, 22 involved in nuclear or ballistic missile activities and three linked to the Islamic Republic of Iran Shipping Lines. That more than doubles the 35 entities now subject to an asset freeze.

The resolution also adds one individual to the previous list of 40 Iranians subject to an asset freeze - Javad Rahiqi who heads the Atomic Energy Organization of Iran's Esfahan Nuclear Technology Center. Under its provisions, all 41 individuals are now also subject to a travel ban.

The resolution also calls on all countries to cooperate in cargo inspections - which must receive the consent of the ship's flag state - if there are "reasonable grounds" to believe the cargo could contribute to Iranian nuclear program.

On the financial side, it calls on - but does not require - countries to block financial transactions, including insurance and reinsurance, and to ban the licensing of Iranian banks if they have information that provides "reasonable grounds" to believe these activities could contribute to Iranian nuclear activities.

China and Russia have strong economic ties with Iran and last week Russia's Foreign Minister Sergei Lavrov was quoted as saying in Beijing that the resolution would protect the economic interests of both countries.

China's U.N. Ambassador Zhang Yesui said after the vote that the sanctions were aimed at curbing nonproliferation and would not affect "the normal life of the Iranian people" nor deter their normal trade activity.

The new resolution was hammered out during several months of difficult negotiations by the five veto-wielding permanent council members - the U.S., Russia, China, Britain and France - and nonmember Germany who have been trying for several years to get Iran into serious discussions on its nuclear ambitions.

The five permanent council members, in a statement after the vote, stressed that the resolution "keeps the door open for early engagement" with Iran. It welcomed and commended "all diplomatic efforts, especially those by Brazil and Turkey."

But in Vienna, three diplomats said the U.S., Russia and France dismissed Iran's proposal to swap some of its enriched uranium for fuel for a research reactor in Tehran which was brokered by Brazil and Turkey.

The diplomats, speaking on condition of anonymity because the replies were private, said they contain a series of questions that in effect stall any negotiations on the issue and present Tehran with indirect demands that it is not ready to meet.

The International Atomic Energy Agency confirmed receipt of the three-nation response and said it would be passed on to Tehran.

The U.S., Russia and France have said that - unlike the original plan drawn up eight months ago - the swap proposal would leave Iran with enough material to make a nuclear weapon.

A European Union statement also criticized Iran for stonewalling attempts to probe its nuclear activities and refusing to heed U.N. Security Council demands for a freeze on enrichment, which can make both nuclear fuel and fissile warhead material.

But his Iranian counterpart, Ali Asghar Soltanieh told the meeting that "illegal resolutions" by the council will not stop his country from exercising its "legitimate right to develop its nuclear program."