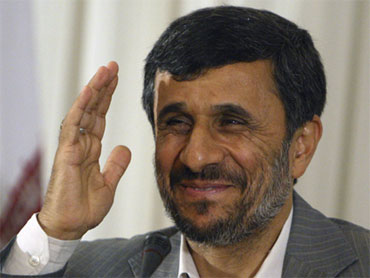 Iran is high on President Obama's agenda for good reasons: Iran's Red Crescent Society announced this week that a 3,000 ton vessel is heading soon for Gaza; International Atomic Energy Agency (IAEA) inspectors reported that Iran has enough nuclear fuel, if enriched, for two nuclear weapons, and U.S. Defense Secretary Robert Gates, in London, said the U.S. has not lost the ability to stop Iran from getting a nuclear weapon, but the clock is ticking.

Gates accused Iran of providing Hezbollah with rockets and missiles. Iran has been setting up shell organizations to avoid sanctions, and the opposition Green movement, devastated by brutal crackdowns, is suffering on the one year anniversary of the disputed June 2009 elections.

With Middle East tension high and Iran at the center of the storm, the Obama administration successfully got China and Russia to back, with few compromises, a new U.N. Security Council Resolution -- the fourth since 2006 -- which increases the cost to Iran of purchasing banned weapons.

The proposed sanctions appear to include Russia's agreement not to ship advanced S-300 missile systems to Iran, and the resolution names names -- 41 individuals and entities in the Islamic Republic who would face much tougher scrutiny.

Secretary of State Hillary Rodham Clinton on Tuesday called the new proposed U.N. penalties, "the most significant sanctions that Iran has ever faced."

The U.N. Security Council's Wednesday vote on the proposed resolution has been motivated, in large part, by Iran's defiance of international demands to freeze its nuclear program. Iran has threatened to withdraw the offer to export some of its uranium under a deal brokered by Brazil and Turkey because the new resolution proposes tough new enforceable sanctions, including financial restrictions on Iranian banks, businesses, individual members of the powerful military force, the Revolutionary Guard, and it bans Iran from purchasing certain missiles, combat aircraft and warships.

In spite of four years under three rounds of previously-imposed sanctions, Iran has continued to expand its nuclear facilities, and skeptics fear Iran's defiance and support for terror groups will continue to grow.

The Resolution does not target Iran's energy industry, as had earlier been discussed, and it does not impose an oil embargo. The door is not closed to negotiations for the Brazil-Turkey negotiated export of uranium, but the idea was to freeze Iran's uranium enrichment -- and that was not on the table.

Iran's U.N. Ambassador, Mohammad Khazaee, has already called the proposed resolution "a grave mistake," suggesting it actually has some teeth.

Although Iran's defiant President Mahmoud Ahmadinejad (seen above) continues to claim the country's nuclear program is for electricity and medical use only, the new resolution gained momentum because of an international watchdog agency report that said Iran now has enough uranium -- if enriched -- to build two nuclear weapons and that its intentions have not been proven to be purely peaceful.

The U.N. vote on the new sanctions takes place on the same week as opposition rallies in Iran are planned to mark the first anniversary of the disputed June presidential elections last year, and supporters in the U.S. and Israel hope that the combined efforts of the internal opposition and international condemnation will curtail Iran's nuclear programs.